LOS ANGELES (RNS) — The Most Rev. Ángel Velandia stood outside the home of a member of his congregation who had been battling cancer, praying the rosary for her and for the wellbeing of others struggling with COVID-19.

As he concluded the 40-minute prayer session, Velandia looked into the camera that was streaming it live on Facebook and told his followers not to lose faith. “This pandemic will pass,” said Velandia, bishop of the Diocese of California of the Old Catholic Church. “Trust in the Lord.”

“Keep your spirits up,” he said in Spanish, before putting his mask on to go inside the house.

It’s scenes like these that convinced Rocio Ibarra to connect with Mision Cristo Rey, an Old Catholic Church outpost about five hours from her home in Stockton, in California’s Central Valley. 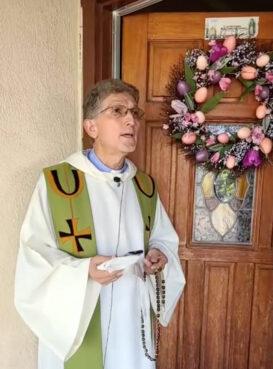 The Most Rev. Ángel Velandia prays the rosary outside the home of a member of his congregation who was battling cancer in Aug. 2020, in southern California. Video screengrab

After Ibarra lost her grandmother, a cousin, her grandfather and an uncle, all within the past year, she sought guidance from Mision Cristo Rey, a collection of small Latino congregations with about 150 consistent members in the greater Los Angeles area. Mision Cristo Rey operates within the Diocese of California of the Old Catholic Church.

Ibarra feels more connected to Mision Cristo Rey than she does to her neighborhood Catholic church in Stockton.

There’s less bureaucracy, she said. Ibarra feels she can’t just knock on her neighborhood church’s doors to ask for a pastor to bless her home or to request prayers.

Ibarra said that even before the pandemic, Velandia would drive to her Central Valley neighborhood to host sacraments for her and her neighbors outdoors.

Velandia was ordained in the Roman Catholic Church in 1990 but left the church to be in a committed relationship with a woman whom he married. He was ordained a bishop by a prelate of the Old Catholic Church that broke away from Rome in Europe, following the First Vatican Council.

Calling itself a mission church, Mision Cristo Rey holds Masses and baptisms, quinceañera and marriage ceremonies outdoors on ranches and in backyards under tarps as well as in its own parishes in Los Angeles and San Bernardino counties.

The six-year-old California diocese, led by Velandia, is financially and politically independent of the Roman Church and the Archdiocese of Los Angeles. It adheres to standard Catholic teachings and rituals while allowing its clergy to choose marriage or celibacy, “as it was in the first centuries of the church,” in the words of the church’s website.

Dr. Anthony Fauci, the government’s leading infectious disease expert, called Latinos’ situation an “extraordinary problem” as he detailed the numbers at a virtual briefing for the Congressional Hispanic Caucus on Sept. 30.

As Latinos deal with these disparities, many are turning to faith communities for solace, and as Ibarra testified, the nature of the help is often more important than the name on the church door. 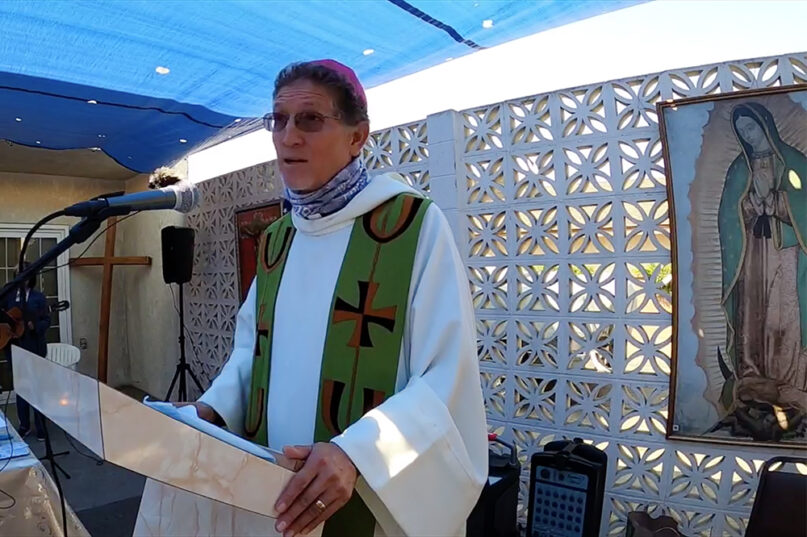 The Most Rev. Ángel Velandia speaks during an outdoor morning service at Mision Cristo Rey in southern California on Sept. 27, 2020. Video screengrab

Velandia held a virtual Zoom service for her family in honor of her deceased loved ones. He also accompanied her and her family to services honoring her uncle, who spent his last days alone in a hospital room due to COVID-19.

As she copes with her grief, Ibarra has found comfort in Mision Cristo Rey’s rosary prayers and services on Facebook. She connects to its 5 a.m. sunrise prayers as she prepares food for the day or tunes into Velandia’s afternoon prayers. She sometimes sends Velandia prayer requests through WhatsApp.

With these services, she said, “You don’t feel alone.”

Another advantage Mision Cristo Rey has had during the pandemic is its flexibility, said Velandia. Considering they work as missionaries and host services where they’re asked, the church’s clergy didn’t need to adjust much. They did, however, have to provide a more robust online presence.

Velandia can’t say exactly how many church members have been struck by the virus because, he said, there’s a lot of shame in disclosing that kind of information. “They feel ostracized. They don’t want people to look at them in a bad way,” Velandia said.

When Cecilia Cruz and her son caught COVID-19 this summer, she confided in Velandia and asked him to keep her in his prayers. Cruz identifies as a Roman Catholic but said she has bonded with Velandia and his community through her theater work producing religious plays in Southern California communities.

Cruz’s symptoms were horrible, she said. Her chest, back and her fingers ached. Holding a cup of water was painful, Cruz said. Breathing was hard.

“I never imagined I would get infected. In that moment of my sickness, my faith began to get ahold of me,” she said.

Cruz devoted hours praying the rosary and would connect to Velandia’s online prayer streams. Through her recovery, she drank water, took Ibuprofen and prayed the rosary.

“The point is to really believe that God is here and that there is no better medicine than praying the rosary,” she said.

“The rosary is the most powerful weapon,” she said.