(RNS) — A North Carolina church says that a former staff member who was arrested in Detroit two weeks ago for allegedly urinating on a fellow passenger on a plane was not a pastor at the church.

Murray and Ash Smith, pastors of Catch the Fire church in Raleigh-Durham, told Religion News Service in an email Saturday (Oct. 31) that the church “was shocked and saddened” to hear of  Daniel Chalmers’ arrest, but said Chalmers had served in a “non-pastor” support role at Catch the Fire, and had not told them about the incident before he was identified in news reports late Monday (Oct. 26).

Chalmers taught at a School of Revival run by the church, the Smiths said, but is no longer employed there, according to the Smiths.

“We immediately started seeking answers, including asking Daniel why he had waited so long to inform our church. He expressed grief and horror over his actions and the effects on his fellow passenger. Recognizing the seriousness of his decisions, he tendered his resignation, effective immediately,” the Smiths said in their statement.

The Smiths said they were praying for Alicia Beverly, the alleged victim of Chalmer’s actions.

“Our heart goes out to the other passenger.  We can only imagine the trauma she has experienced,” the pastors said.

They added that Chalmers is involved with another ministry called Love Wins, but the Smiths said that their church has no official ties to that group and that Chalmers was not on church business.

Speculation about Chalmers’ identity began shortly after a report from a Detroit television station that a “well-known” North Carolina pastor was arrested in the airline incident. Several pastors in North Carolina issued denials that they were involved before The NC Beat, an online publication, published a police report naming Chalmers.

The news outlet obtained the report through a Freedom of Information Act request to the Wayne Metro Airport Police Department in Michigan.

Chalmers’ wife, Shara, told Religion News Service that her husband had a bad reaction to a sleeping medication and was sleepwalking at the time.

On Oct. 13, Michigan authorities took into custody a man described by the local Fox television station only as “a well-known” North Carolina pastor.

According to Fox 2 Detroit, Alicia Beverly was flying from Las Vegas to Detroit on Oct. 12. After falling asleep, she awoke to find another passenger relieving himself on her. The FBI later said a man was taken into custody and given a date to appear in court, but it did not identify him publicly.

The police report published by The NC Beat said that an off-duty officer saw Chalmers walking down the aisle of the airplane and then heard a scream coming from another passenger. The officer spoke to Beverly, who said Chalmers had urinated on her.

When the officer spoke to Chalmers, according to the report, he denied any involvement, allegedly saying, “I am a pastor, that is out of my character, I didn’t do it.”  When the flight landed in Detroit, Chalmers was cited on a misdemeanor charge of disorderly conduct, then released.

When questioned by police at the airport, according to the report, Chalmers admitted having a few drinks and taking sleeping medication. He also submitted to a blood alcohol test. 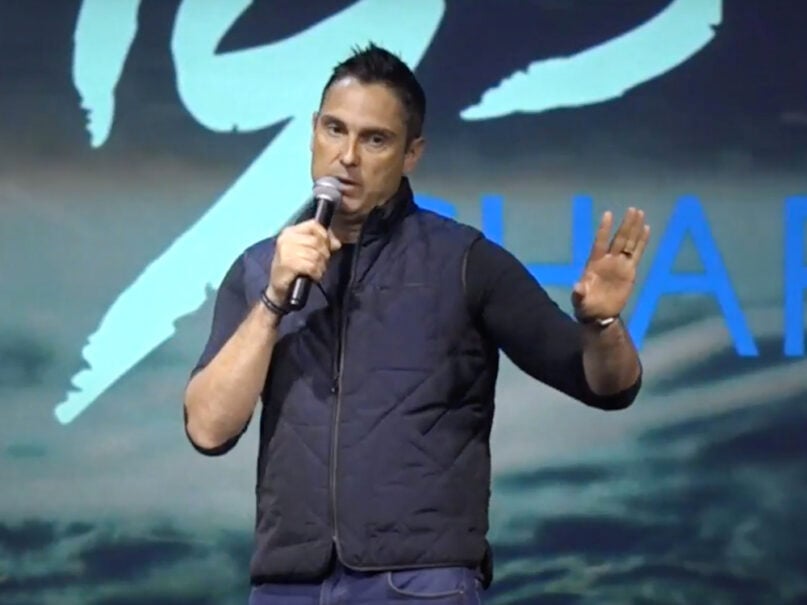 Shara Chalmers, a filmmaker and minister who runs Love Wins Ministries with her husband, said he never intended to hurt anyone. She told RNS in an email that he had an “extreme medical reaction” to the sleep medication Ambien and was sleepwalking when the incident occurred.

“He has or would never intentionally hurt anyone,” she said in the email. “He has never done this before and will never take more sleeping medicine. He has written the passenger and taken full responsibility, repented, asked forgiveness and asked if there was anything he can do to make things right, as it was obviously traumatic for her.”

During the protests after the death last spring of George Floyd in Minneapolis, Danny and Shara Chalmers helped organized an event in Cary, North Carolina, where faith leaders and police washed the feet of Black protesters, according to CBN.

The couple’s ministry has ties to Bethel Community Church, a California charismatic megachurch, and Danny Chalmers attended Bethel’s Bethel School of Supernatural Ministry, according to a biography found online.

Shara Chalmers said that the couple has been out of the country visiting a sick relative and was not aware of the online controversy the story had created after the initial news report.

(This story has been updated with a statement from Catch the Fire Church.)