(RNS) — A few weeks ago, I had the pleasure of watching “Heroes of the Fourth Turning” for the second time. The circumstances were different, of course. The first time I saw the Pulitzer-nominated play by Will Arbery, I was in an ordinary New York theater, surrounded by other people. This time, I saw the play livestreamed on Zoom: its four main characters (and third-act assist) in illuminated isolation, in four separate boxes.

“Heroes” takes place over a single night, as four alumni of a conservative Wyoming Catholic college (based on Wyoming Catholic College, where Arbery’s parents both teach) reunite years after graduation to talk abortion, the Virgin Mary, racism, despair and the coming culture wars.

For a play so dialogue-rich and debate-driven, the Zoom format worked almost as well — and in some ways better — than its conventional stage division: at once foregrounding the intellectual intensity of the dialogue and highlighting the precise way in which every exchange, from the mundane to the explicitly ideas-driven, is at its core about the same thing: an alienation at once interpersonal and aesthetic.

There is, for example, the moment when cocaine-huffing Breitbart scion, Theresa, schools sad sack Kevin on theologian Walter Brueggemann’s understanding of the “scandal of the particular.” There is some back-and-forth over moisturizer, some scandalized gossip over who has and hasn’t had premarital sex, plenty of drinking. And, later, Theresa in another breathy monologue explains the modern culture wars against the background of the four historical “turnings” for which the play is named.

When “Heroes” first came out, it was hailed largely (if reductionistically) as an affecting glimpse into American conservatives — and even far-right Trumpism — an effort to engender empathy for four different strands of the so-called deplorables.

Arbery’s play certainly humanizes even its most grotesque characters. But the genius of “Heroes” lies not in acts of sociological “translation” but in its commitment to a darker, but more universal truth: Deep down, we long to live in, as the Chinese proverb puts it, interesting times.

The authentic desire for meaning — for a God that breaks them open — is inextricable from the characters’ aestheticized desire for self-regard: to be a hero, in an age of heroism, to play a vital role at the end of the world.

Whether they hunger for a culture-war-style apocalypse — as Theresa does, with body language that flirts with arousal — or long like Emily does for a spiritualization of her bodily pain, Arbery’s characters at once blend the deeply spiritual hunger to know with what we might consider Augustinian curiositas: the alienated hunger to see what happens next.

The young alumni argue they’re fighting the “liberals” — godless heathens committed to tearing down America with political correctness — but what they’re actually fighting is their own despair.

They want to live in an enchanted world — a sacralized world. The specificity of that enchantment is immaterial. Their crisis isn’t the crisis of conservatism, per se, but rather the broader crisis of aesthetic accelerations: our not-so-deeply-buried cultural desire to live in cosmically significant times. Look no further than our modern apocalyptic “lol 2020” memetic discourse.

The only thing worse than 2020 being the harbinger of the end of the world, after all, is the notion that it doesn’t matter at all.

Theresa’s monologue about Brueggemann’s scandal of the particular, in such a reading, takes on a particular irony. Why, Kevin asks her, should we venerate the Virgin Mary — just a girl, after all. Theresa responds with a theologically rich, intellectually serious defense of Christian particularity: the idea that our relationship to one person, one God-became-man, and to other human beings in all their particularity, is central to the Christian life. This, even as Theresa is the most susceptible of all Arbery’s characters to blithe genericism: flattening the complexity of life into the easy narrative of archetype. Kevin rightly points out a moment later that her interest in the scandal of the particular never stretches as far as to what’s actually going on with Kevin, personally.

The accelerationist aesthetic, cosmically sexy as it is, never quite makes space for the particular.

The play’s ending (spoiler alert) is unsettling. Emily is, at last, broken open, by her own pain and those of others. She falls, screaming in possessed pain, even as the mysterious, demonic noises in the woods (Justin lies and says it’s a faulty generator) get louder.

Some critics have seen the finale as a sign of Emily’s demonic possession, of empathy-as-susceptibility. She is, after all, the character whose sympathetic friendships with Planned Parenthood workers put her at odds with Theresa’s hard-line anti-abortion moral stance.

But against the moral background of the play, Emily’s breakdown — and the sheer awfulness of those woodland sounds — suggests something deeper: a vision of God that, in its very ugliness, its brokenness, obliterates our aesthetic hopes.

When the thing we’ve been waiting for comes, Arbery suggests, we’re not going to like it. 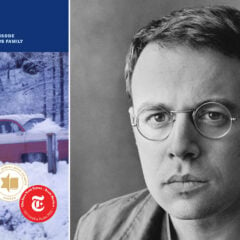