PASADENA, Calif. (RNS) — When All Saints Episcopal Church announced it would open its sanctuary, which had been closed since March due to COVID-19, for passersby to light a candle, say a prayer or simply reflect on a contentious Election Day, Margo Groves thought, “This is the place where we needed to be.”

Groves and her husband, Bob Hunter, visited the sanctuary Tuesday (Nov. 3) to seek “peace of mind (and) to get away from the anxiety of COVID-19 and the election.” They had already cast their ballots late October.

“The building itself is comforting, healing and enveloping,” Groves said.

The leadership at All Saints, a church with a long history of progressive activism, decided that opening the building to the public and parishioners was “a way for them to be in community,” said Alfredo Feregrino, associate rector at All Saints. The church, which has offered a range of online services during the COVID-19 pandemic, is still closed for congregational worship.

The church, across the street from Pasadena City Hall and close to Old Town Pasadena, an outdoor shopping and dining district, also opened its church grounds as a sanctuary space in August for protesters in support of Black Lives Matter.

On Tuesday, masks and hand sanitizer were on hand, and volunteers and staff made sure county health protocols were followed. Social distancing was in place. An Election Day Mass was also held outside at noon. A steady stream of people, some of them members who stopped by to reacquaint themselves with their church, came and went. 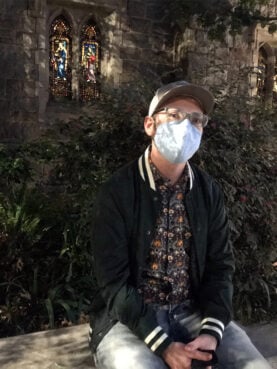 Ben Boquist visited All Saints Episcopal Church to pray and reflect inside the sanctuary on Election Day, Nov. 3, 2020. RNS photo by Alejandra Molina

Ben Boquist, a local teacher, said his Christianity tells him God is on the side of justice and the oppressed. And on Election Day, he wanted to “go to a place that I associate with God.”

If President Donald Trump wins, Boquist said the work of people of faith won’t change, but it will get “a little bit harder because we have more to risk.”

For Judy Van Vleet, being at church on Election Day was important “to be able to sit in the sanctuary where I feel so much peace.” She went into the sanctuary after work and just before it closed for the evening.

Van Vleet said she’s an optimist, but as a lesbian, she’s “concerned about possibly having some rights taken away.”

“I just feel like there’s so much division,” she said.

Sandra Jimenez visited All Saints after searching online for any vigils or church services available on Election Day. It was her first time at the church.

“With all the turmoil that there’s been, I felt that God is the only one who has power over these situations,” Jimenez said. “I wanted to do something positive.”

Jimenez said it’s been hard to see the level of division over the past four years. It’s been scary, she said.

“This is normally a way that I cope, going to church, and it’s been really hard not having that,” she said. “I was so grateful that they were open today. It’s the only thing that I thought would give me a sense of peace.”