(RNS) — Joe Biden is poised to gain the most votes of any Democratic candidate in Utah since Lyndon B. Johnson won the state in 1964, early tallies show. 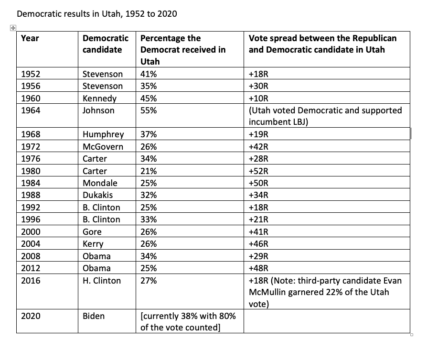 As of this writing, with 80% of precincts reporting, Biden has garnered 38% of the vote, compared to Donald Trump’s 58.3%. That may not sound like a lot, but in a deeply Mormon and Republican state, it’s noteworthy.

Brigham Young University political science professor Richard Davis said he expects Biden to gain even more share once all the votes are counted, since many that remain to be counted are from Democratic-friendly Salt Lake City, where only 68% of the expected vote has been tallied so far.

Davis pointed to a Y2K poll released over the weekend that showed Biden with 44% support in Utah compared to Trump’s 51%. So “it wouldn’t surprise me” if Biden broke the 40% barrier, becoming the first Democrat to do so in nearly half a century, he said.

It remains to be seen whether this 2020 result signals a lasting political realignment in the state or just a temporary anti-Trump phase as Utah voters, especially women, revolt against an unpopular president.

Davis notes the seeds for Biden’s success were planted four years ago, even though Hillary Clinton did not do particularly well in Utah.

“This actually goes back to 2016, when quite a few Republicans voted for (third-party candidate) Evan McMullin,” Davis said. “I think what we’re seeing is that a lot of them didn’t come back to the Republican Party. If Biden has picked up a considerable number, he may have picked up most of those McMullin voters. It suggests kind of a realignment going on in Utah. Is this an anti-Trump vote, or has this become an anti-Republican vote? We’ll know that better as we go along.”

Jacob Rugh, an associate professor of sociology at BYU, has drilled down into the details of how the vote played out in the deeply LDS precincts in Provo, around the university. In the state as a whole, about 6 in 10 people are members of the Church of Jesus Christ of Latter-day Saints, but in Utah County, home to Provo, the church is especially dominant: more than 8 in 10 people are members.

The county used to be a sea of red, but that is changing into a classic town-and-gown divide.

“Utah County as a whole was more synonymous with Provo until the 2016 election, and then you see the ‘college town’ pattern set in, where the area immediately around the university is blue. Like Athens, Georgia.” Back in September, Rugh wrote an article predicting that seven precincts in Provo would tilt Democratic in this election, and he took some heat for it. “There was a lot of Monday-morning quarterbacking of my predictions, and I think that was justified. We know from research that partisanship is very sticky.” People don’t often switch parties, so for seven precincts to move from red to blue would be a major development.

“My reply was that these young people have come of age with the 2016 and 2020 election. They have not been socialized into a pattern of voting Republican, even if they inherited that affiliation from their parents.”

His prediction turned out to be wrong, but in the other direction. Nine precincts went blue, not just seven. And, he points out, a tenth precinct missed going blue by just four votes (as of this morning).

Rugh’s analysis shows Richard Davis is correct: Evan McMullin paved the way for many of these voters. All nine of the Utah County precincts that turned blue this year were among the 18 that went for McMullin in 2016.

While it’s surprising to see Biden voters in such a traditionally Republican and deeply religious county, it’s a sign of the times. “These Provo voters are younger and highly educated,” compared to other voters in the area, Rugh said, and they are very tired of Trump.

But some Republicans in Provo seem to have just stayed home rather than voting for a candidate from the other party. Voter turnout was only 66% — not an enormous drop-off compared to the 2016 election (67%), but lower than earlier presidential elections, like the 78% turnout in 2004.