(RNS) — Martha Hennessy, a granddaughter of Dorothy Day, the founder of the Catholic Worker movement, was sentenced Friday (Nov. 13) to 10 months in prison for breaking into Kings Bay Naval Base in Georgia two years ago to protest its stockpile of nuclear weapons.

Hennessy’s was the lightest sentence given for the break-in at the Navy base 40 miles south of Brunswick, Georgia, on April 4, 2018, in which Hennessy, 65, was joined by six other Catholic pacifists. Together they are known as the Kings Bay Plowshares 7, named after the Plowshares anti-war movement founded 40 years ago by Daniel and Philip Berrigan, both Jesuit priests, and six others.

The Plowshares 7 were convicted last year of destruction of property on a naval installation, depredation of government property, trespass and conspiracy. During the break-in, the group cut a padlock, and later a security fence, at the naval base. They spilled blood on a Navy wall insignia, spray-painted anti-war slogans on a walkway and banged on a monument to nuclear warfare.

“We can’t allow those kinds of things to happen without recourse,” said U.S. Circuit Court Judge Lisa Godbey Wood on Friday. “Taking those actions at those times in that area was dangerous not just to Ms. Hennessy but to the others there.”

READ:  Catholic worker who broke into naval base to protest nuclear weapons sentenced 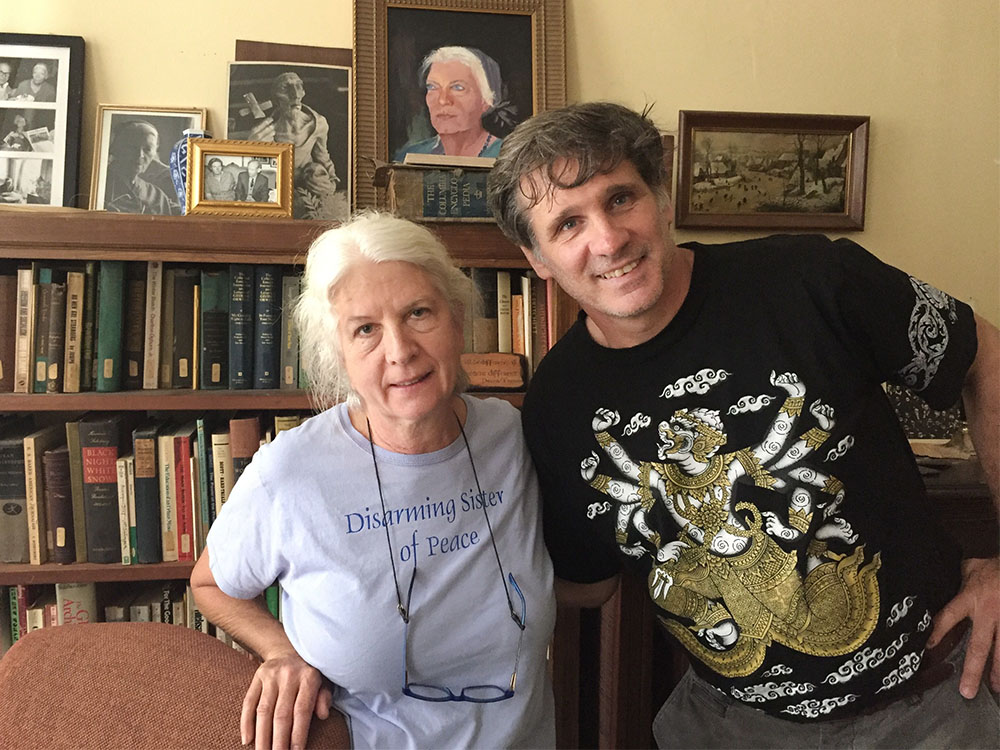 Martha Hennessy, left, and Carmen Trotta, at Maryhouse in New York City, are two of the Kings Bay Plowshares 7. Hennessy is the granddaughter of Dorothy Day, whose likeness appears in the painting on the bookcase. RNS photo by Yonat Shimron

Four witnesses, including a Catholic nun and a lawyer for the Catholic peace movement Pax Christi, testified to Hennessy’s character during the more than three-hour sentencing hearing, which was conducted online because of the coronavirus pandemic. They spoke of her humble service preparing food, serving it and attending to the needs of the homeless and other visitors at Maryhouse, the Catholic Worker hospitality center in New York City’s Bowery neighborhood, where Day lived and died.

Hennessy is the only one of Day’s nine grandchildren to dedicate herself to what Catholics call “works of mercy,” practices considered of special merit in Christian ethics. She acknowledged she drifted away from the church as a young person but returned about 10 years ago and has since made the eradication of nuclear weapons her cause.

Mary T. Yelenick, the Pax Christi lawyer, argued at the sentencing that laws evolve, and practices once considered legal, such as slavery, are now viewed as immoral and repugnant. Nuclear weapons, she said, should also be added to the list.

“None of us, in this courtroom, in this county, in this nation or on this small closely connected planet, can escape the necessary consequences of what is happening in Brunswick (Georgia),” Yelenick said. “Sentencing guidelines cannot help us escape our own moral responsibility.”

Hennessy — in a statement right before her sentencing — said she regarded the action as a religious exercise, likening it to Jesus’ action of overturning the money-changing tables at the entrance to the Jerusalem Temple, as described in the New Testament gospels.

“I had no criminal intent,” she said. “I wanted to prevent a nuclear holocaust.”

Only one other of the seven Plowshares — Mark Colville, a Catholic Worker from New Haven, Connecticut — remains to be sentenced.

News
Martin Gugino committed to struggle, despite grand jury dismissal
Follow us on Facebook!
Submit your photos to RNS