(RNS) — Two Category 4 hurricanes have hit Central America, coming ashore within 15 miles and 13 days of each other in Nicaragua and killing several across the region, according to ABC News.

As drastic as the immediate effects are, Lester Ramirez, director of governance and transparency at the Association for a More Just Society, is preparing for what comes next.

The AJS, a Christian nonprofit in Honduras and the United States, has already been working with local Honduran groups to help residents find shelter and provide them with monetary assistance.

But Ramirez expects that the aftermath of the storms will send many disadvantaged Hondurans, many of whom have been grappling with the economic fallout of COVID-19, further into poverty. This means violence and crime will follow, said Ramirez by phone from Honduras.

The organization has taken a big-picture approach to disaster relief since it was founded in 1998 by a group of four Hondurans and a North American couple who was working in Central America. With about 70 employees in Honduras and 6 more in the U.S. branch, which started two years later and is based in Michigan, AJS focuses on education reform, healthcare, domestic violence, gang prevention and even anti-corruption work, all of which affect its clientele.

The organization, Ramirez said, is guided by the belief that Christians are called to pursue justice, a call that is different from charity, according to the group’s website. Instead it “challenges powerful people and structures that perpetuate cycles of corruption and violence and disenfranchise the poor.” This includes attention to literal nuts-and-bolts issues, such as the country’s depleted infrastructure. The roads, already in bad shape, have suffered washouts in the hurricanes, and Ramirez said he expects to see bridges collapse. San Pedro Sula’s airport was inundated.

Two hurricanes in less than two weeks “is something that has never happened,” said Ramirez. “People have basically lost their livelihoods, and the government is very corrupt and doesn’t have the capability to solve these problems.”

As COVID-19 spread in Honduras, the association conducted an audit of the government’s pandemic emergency purchases. It found that the government paid too much for mobile hospitals, likely to pay kickbacks, according to Jill Stoltzfus, the executive director of the group’s U.S. office.

Now AJS’ lawyers and policy experts are monitoring the government’s decisions and calling for accountability “so that those most affected will not be forgotten in the weeks to come.”

The organization’s multilevel approach to relief work recognizes how crises are interconnected, and a hurricane in one country can create different emergencies elsewhere. If the international community, especially the United States, doesn’t respond to the situation in Honduras, Ramirez said, new migrant caravans will begin making the trek to Guatemala and Mexico in the coming weeks. 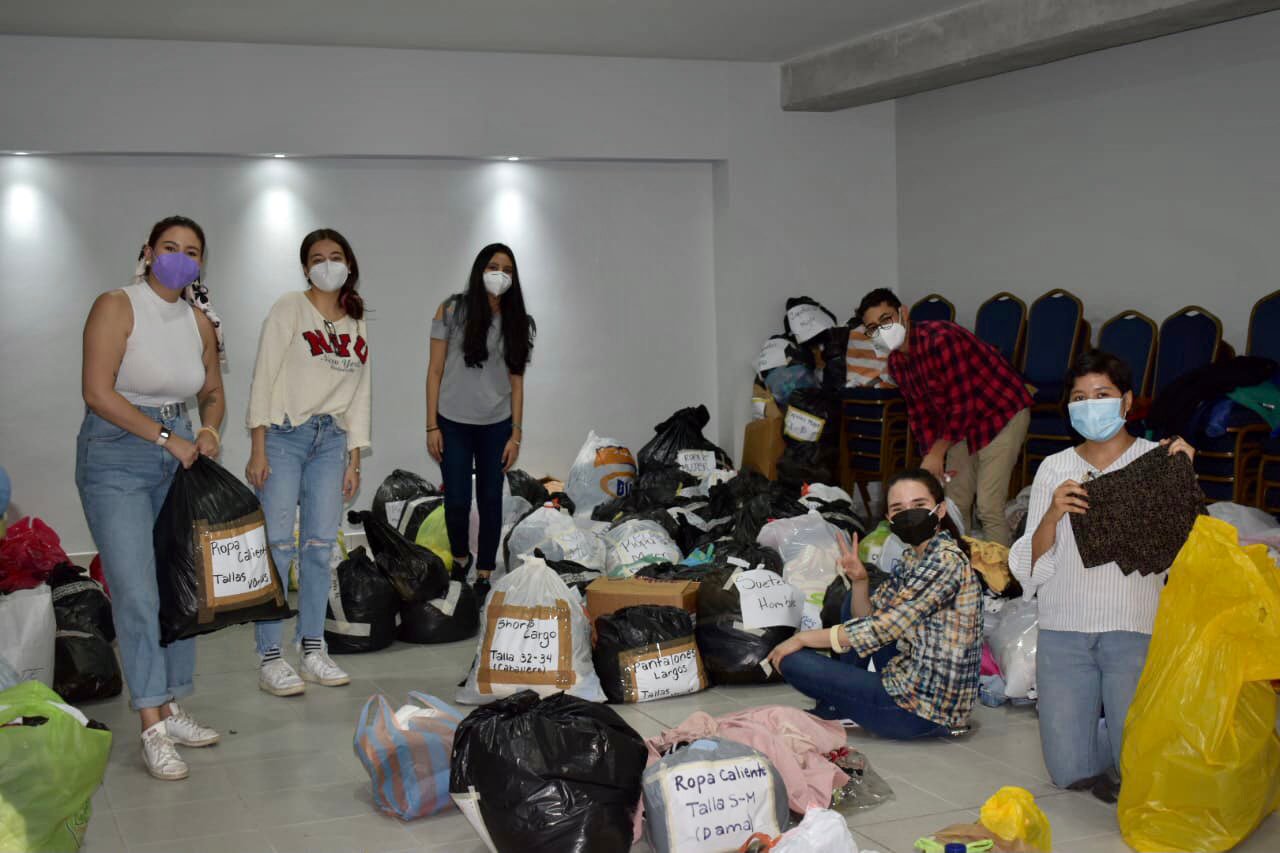 Workers with the Association for a More Just Society organize clothing to be distributed in response to Hurricane Eta in Honduras. Photo courtesy of AJS

The group’s funding is also international in scope. On the U.S. side, AJS has a network of 1,100 churches and individuals who donate annually. Those donations, Stoltzfus said, “are necessary to be able to carry out the work in Honduras.”

The group in Honduras has also received grants from international foundations in Europe and the U.S. However, the group lost $2 million in U.S. funding when President Donald Trump decided last year to cut aid to Central America, Stoltzfus said.

“It feels a little cruel. Honduras is dealing with multiple crises at the same moment,” Stoltzfus said.

But Ramirez has been encouraged by the surge of advocacy and relief work coming from youth groups in Honduras, and AJS has opened its office space in the capital, Tegucigalpa, as a central location where donors can drop off hygiene items, baby supplies, clothes, food and bedding. A GoFundMe set up by local groups has so far raised nearly $300,000.

The association, meanwhile, is keeping its sights on the higher goal. “We’re trying to make sure people can flourish in Honduras,” Stoltzfus said. “We want to address those push factors — corruption, violence, insecurity — not only to prevent migration, but so that people can flourish.”

As devastating as the hurricanes have been, Stoltzfus believes they are also a chance to focus Hondurans on rebuilding a country already damaged by multiple ills. “We’re going to be in Honduras for the long haul … to make it even better than it was before.”