CHICAGO (RNS) — It has been more than 500 years since German monk Martin Luther’s words went viral, thanks to what was then some cutting-edge technology.

In 1517, Luther’s famed 95 Theses helped spark the Protestant Reformation after they were distributed far and wide with the help of the printing press, the 16th century’s version of social media.

Now his advice from a later letter, written in the midst of a 1527 pandemic, once again is making the rounds.

Quotes from the letter appeared on social media as the COVID-19 pandemic upended life earlier this year.

Scholar and retired Anglican bishop N.T. Wright highlighted Luther’s advice in “God and the Pandemic,” published in June. And Christianity Today’s website published the full letter, “Whether One May Flee From A Deadly Plague,” with Luther’s byline, in May.

“We’re all trying to figure out how to navigate a worldwide pandemic,” said the Rev. PJ Malin, pastor of family life and assimilation at Good Shepherd Church in Naperville, Illinois.

The congregation, part of the Evangelical Lutheran Church in America, held a lunch-and-learn discussion of Luther’s letter Friday (Nov. 20) on Zoom.

“This is the first time for many of us, but as we’ve been teaching and preaching, some of the resources we’ve gone back to are Martin Luther, and (we’re) realizing that this isn’t the first time people of faith have gone through this,” Malin said.

Every once in a while, people actually pay attention to Luther’s words, said the Rev. Kurt Hendel, the Bernard, Fischer, Westberg Distinguished Ministry Professor Emeritus of Reformation History at the Lutheran School of Theology at Chicago.

And what the reformer had to say in his 1527 letter, later published as a treatise, is “strikingly relevant” today, said Hendel, who spoke at the Friday session.

Luther wrote that letter in the midst of an outbreak of the bubonic plague in Wittenberg, according to the professor emeritus. He was responding to a Lutheran leader in Breslau, who asked whether a Christian ought to leave a city in the midst of a plague outbreak for someplace safer.

In his treatise, Luther wrote:

“Therefore I shall ask God mercifully to protect us. Then I shall fumigate, help purify the air, administer medicine, and take it. I shall avoid places and persons where my presence is not needed in order not to become contaminated and thus perchance infect and pollute others, and so cause their death as a result of my negligence. … See, this is such a God-fearing faith because it is neither brash nor foolhardy and does not tempt God.”

Luther himself had been ordered to leave the university in Wittenberg, where he taught, Hendel said. He refused. Instead, he and his pregnant wife, Katharina von Bora, a former nun who had learned some nursing skills in the cloister, stayed behind and opened a wing of their home as a clinic. 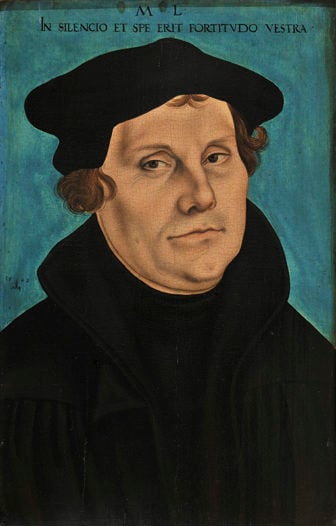 A 1528 portrait of Martin Luther by Lucas Cranach the Elder.  Image courtesy of Creative Commons

Those who are responsible for the spiritual and physical well-being of others must not flee an outbreak, but rather stay and care for people in the midst of it, Luther advised. However, they also must be careful not to make matters worse.

Just as Luther recommended that his readers take and administer medicine, Hendel recommended Christians follow today’s science. And just as Luther — in characteristically colorful language — called those who did not take care not to become infected or to infect others “murderers,” the professor emeritus encouraged Christians to wear face masks and to weigh what God was calling them to do in this moment.

“Love for neighbor is the ultimate criterion that Christians must use as they choose what to think and plan and do — not only during a time of pandemic, but in all times, in all aspects of their lives,” Hendel said.

The ELCA has embraced Luther’s message throughout the pandemic.

The largest Lutheran denomination in the United States gave the reformer’s pandemic advice the meme treatment in August on its Facebook page, accompanied by an illustration of the reformer in a blue disposable face mask and the caption, “We pray AND we act.”

And Presiding Bishop Elizabeth Eaton, in addition to posting weekly video messages, has posted a selfie on Facebook with a statue of Luther in matching masks.