(The Conversation) — President Trump’s plan of holding an in-person Hanukkah reception at the White House on Dec. 9, despite concerns over the coronavirus, is getting much attention on social media.

Some asked whether anyone would be reckless enough to attend, observing that an in-person party, amid the COVID-19 surge, could turn out to be another superspreader event. Others wondered who would be invited, recalling that President Trump, in the past, limited his invitation list to supporters, and why the event was being held on that date. The eight-day festival of Hanukkah, regulated by the Jewish lunar calendar, begins this year on the night of Dec. 10.

Overlooked amid these questions is one that to me, as a historian of American Jewish life and a scholar of American religion, seems far more fascinating and important. How did the office of the president of the United States come to hold an official White House Hanukkah party in the first place?

For most of American history, the only December holiday that gained White House recognition was Christmas. President John Adams and first lady Abigail Adams, back in 1800, threw the first White House Christmas party, a modest affair, planned with their four-year-old granddaughter in mind, and with invitations sent to selected government officials and their children.

In 1923, President Calvin Coolidge inaugurated the practice of lighting an official White House Christmas tree. He also delivered the first formal presidential Christmas message. His message assumed, as most Americans of that time did, that everybody celebrated Christmas.

It displayed, according to The Washington Post, “the reverence of a Christian people giving at the seat of their government the expression of their praise for ‘the King of kings’ on the eve of the anniversary of His birth.” Neither Adams nor Coolidge uttered one word about Hanukkah.

Official notice of Hanukkah waited another half-century – until 1979 – by which time Jews had become much more visible as members of American society and government. Ironically, the president who first paid attention to Hanukkah was Jimmy Carter, although he wasn’t the Jewish community’s favorite Democratic candidate. When he ran for reelection in 1980, he got less than 50% of the Jewish vote – less than any Democrat since 1928.

In 1979, following weeks of seclusion in the White House after Iranian students took over the U.S. embassy in Tehran seizing 52 diplomats and citizens, President Carter emerged and crossed over to Lafayette Park. He lit the large Hanukkah candelabrum, dubbed the “National Menorah,” erected in the park with private funds and delivered brief remarks. 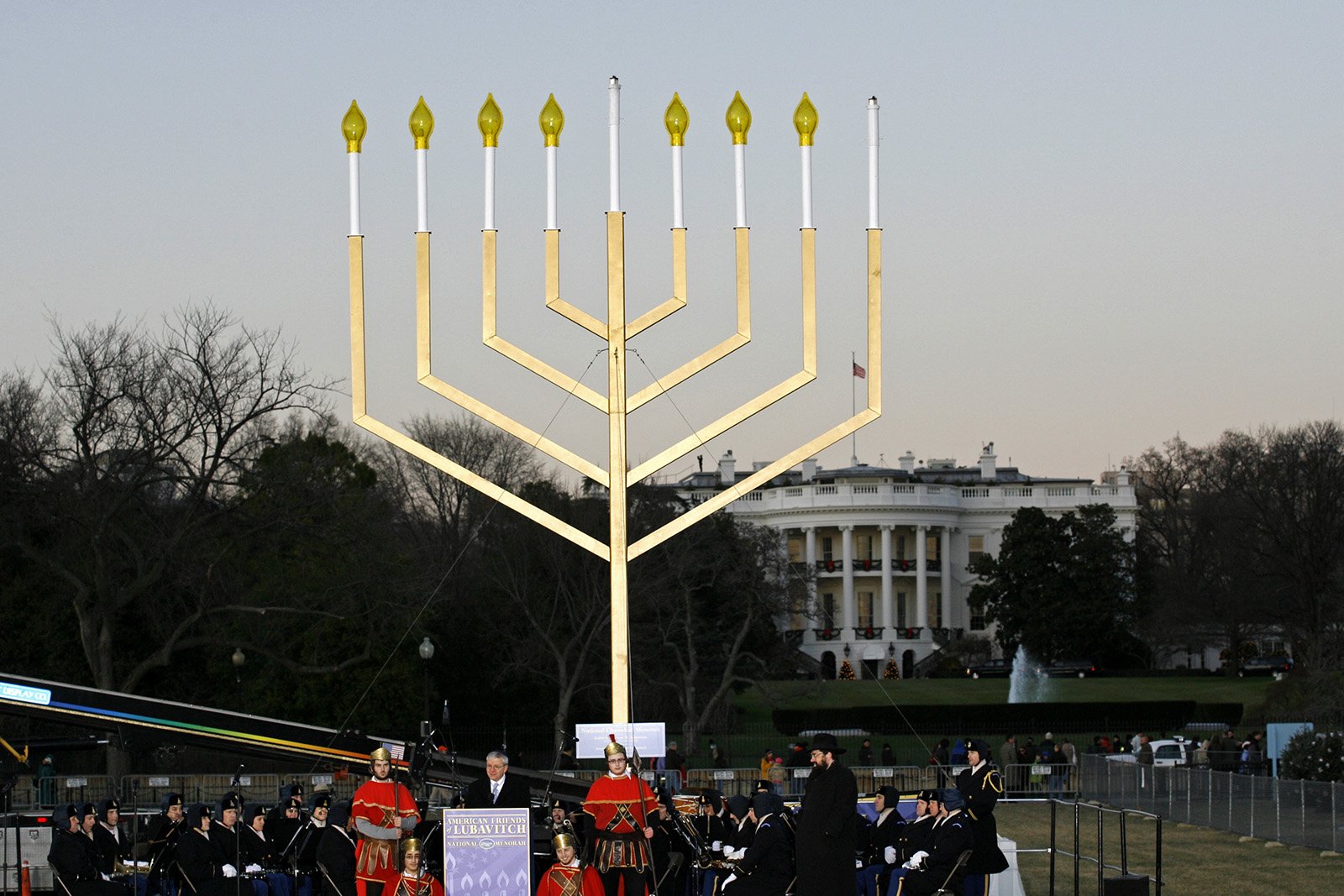 The lighting ceremony of the National Hanukkah Menorah, at the Ellipse, near the White House, in 2008 (AP Photo/Jose Luis Magana)

Seeing that Jews celebrate their own holiday in December – not Christmas but Hanukkah – he directed his next annual Christmas message only “to those of our fellow citizens who join us in the joyous celebration of Christmas.”

Every president since has recognized Hanukkah with a special menorah-lighting ceremony, and limited his Christmas messages to those who actually observe the holiday.

Hanukkah came to the White House itself, in 1989, when President George H.W. Bush displayed a menorah there, a candelabrum given to him by the Synagogue Council of America.

But Bill Clinton was the first president to actually light a menorah in the White House. In 1993, he invited a dozen schoolchildren to the Oval Office for a small ceremony. The event made headlines when 6-year-old Ilana Kattan’s ponytail dipped into the flame and a wisp of smoke was visible around her head. Clinton was reported to have gently rubbed her ponytail with his fingers.

Menorah lightings grew in prominence during the Clinton years. Memorably, in 1998, Clinton joined Israel’s then-President Ezer Weizman in lighting a candle on the first night of Hanukkah in Jerusalem.

But no White House Hanukkah parties ever took place under Clinton. Instead, he included Jewish leaders in a large annual “holiday party.”

The first president to host an official White House Hanukkah party, and the first to actually light a menorah in the White House residence and not just in its public spaces, was George W. Bush, beginning in both cases in 2001.

Since Bush made a point of inserting religion, complete with baby Jesus, into his many annual Christmas parties, he sought to underscore through the Hanukkah party that, as he explained, the White House “belongs to people of all faiths.” Since then Hanukkah has become an official White House tradition.

Hasidic leaders in the distinctive black suits worn by members of their community regularly appeared at these parties. Beginning in 2005 the parties became completely kosher. The fact that this year, amid COVID-19 concerns and a presidential transition, the White House is planning just one Hanukkah party, has pruned the guest list and will hold the event on Dec. 9, before Hanukkah starts, remains noteworthy.

What is truly significant, however, is how much America has changed since Presidents John Adams and Calvin Coolidge invented America’s White House Christmas traditions and paid no attention to Hanukkah at all.

(Jonathan D. Sarna is University Professor and Joseph H. & Belle R. Braun Professor of American Jewish History at Brandeis University. This article is republished from The Conversation under a Creative Commons license. The views expressed in this commentary do not necessarily represent those of Religion News Service.)