Stephen “Cue” Jn-Marie — who founded the faith community known as The Row, or “The Church Without Walls,” in Skid Row — and Pete White — founder of the Los Angeles Community Action Network — are among the organizers taking part in the blockade.

In a statement Tuesday (Dec. 29), Jn-Marie and White said that “Feucht is waging biological warfare against a community he deems as defenseless.”

“He will soon find this is not the case if he chooses to continue down this path,” the statement read.

Feucht’s Dec. 30-31 events in Skid Row and Echo Park are part of his national “Let Us Worship” tour that protests COVID-19 restrictions. The two days of outreach will culminate with a New Year’s Eve celebration from 9 p.m. to midnight at the parking lot of Higher Vision Church in the city of Valencia, more than 30 miles away.

It is unclear what Feucht means by “outreach” to the homeless communities and what is planned for the events being held there. He has not responded to requests for comment by Religion News Service.

His music tour, which Feucht refers to as the #letusworship movement, has been criticized by health officials and faith leaders alike for drawing thousands of spectators and worshippers, many ignoring social distancing guidelines and health orders requiring masks. 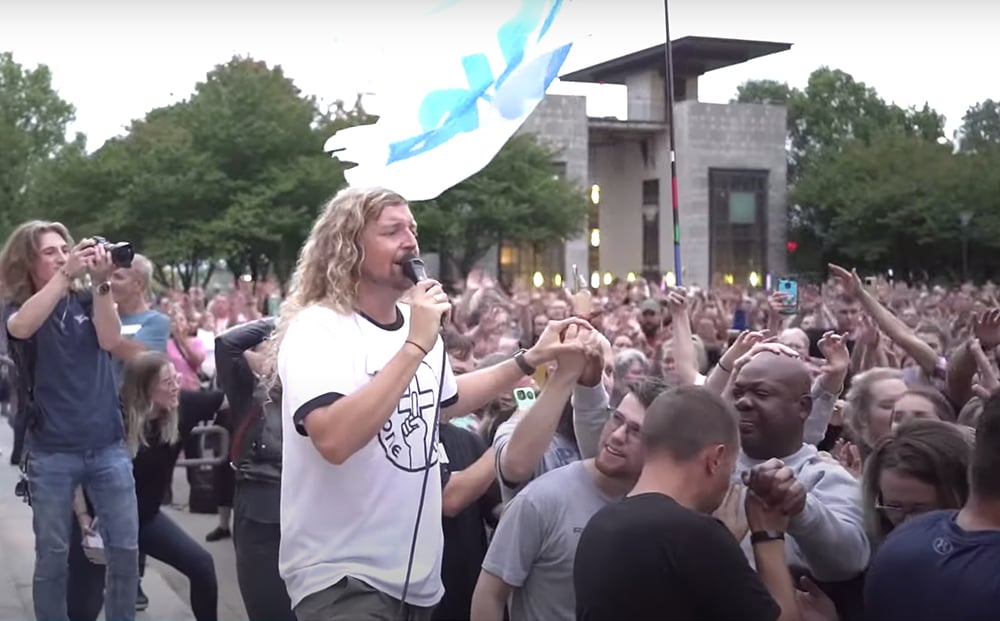 Elena Stern, a spokeswoman with the city’s department of public works, told RNS on Dec. 22 the city had not received an application or issued a permit for any of the scheduled events. Other events held by Feucht in Seattle; Nashville, Tennessee; Washington, D.C.; and other U.S. cities have also met with opposition by local authorities and scattered counterprotests.

Jn-Marie told RNS he sent Feucht a Facebook message on Dec. 21 to express concern about his plans to visit Skid Row. As of Dec. 29, Feucht had not responded.

In a statement submitted to CBS News Los Angeles, Solis said she was concerned about the events and asked the county’s department of public health to look into this matter.

“For a person who purports to care for their community or for people who need religion, Sean Feucht is actually exploiting communities,” Johnson said.

For Feucht to visit Skid Row is “tantamount to abuse,” she said.

“To come into someone’s place, someone’s neighborhood where they are not able to leave, it’s like as if you are walking into somebody’s house,” Johnson added.

Jn-Marie and White said they’ve created hand-washing stations, provided hygiene products and doubled down on promoting mask-wearing. While the community welcomes food, clothing, hygiene items and any other assistance, Jn-Marie said, Skid Row doesn’t need “people to come in for a photo op.”

“We’ve worked to keep the community safe,” he said.