But as the show rockets toward the end of its second season, there are hints it might be about something more than edge-of-your-seat action and Disney+ subscription sales: It’s also an indictment of faith-fueled conflict, and a celebration of religious pluralism.

An encounter between two fan-favorite characters in a recent episode is made all the more profound when one understands that religion — a constant but also often ignored catalyst in the Star Wars universe — is likely the driving force (pun intended) behind many of the actions onscreen.

Warning: Spoilers regarding multiple Star Wars movies, animated television shows and episodes of “The Mandalorian” — including recent ones from the second half of season two — follow. 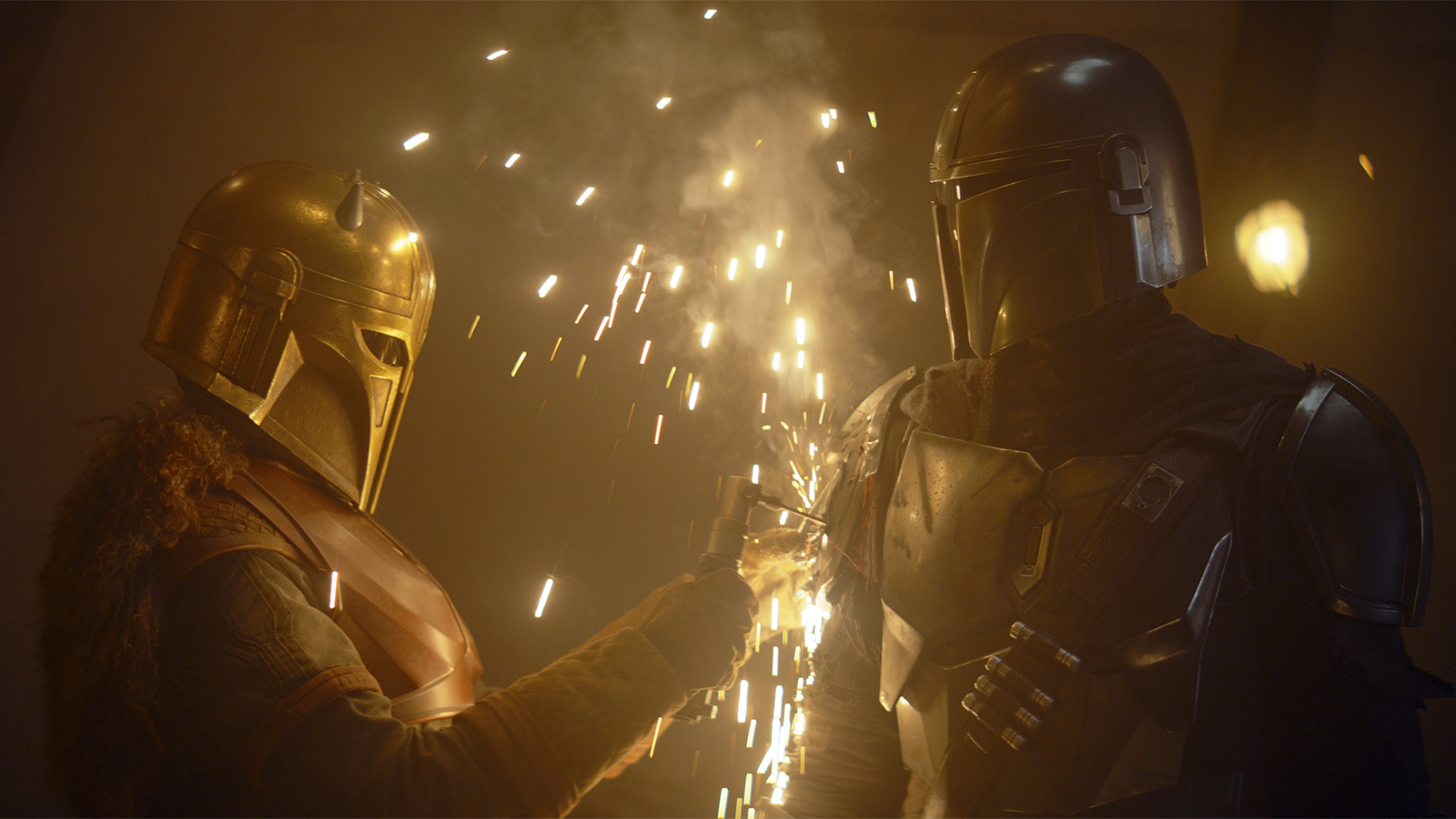 The Armorer, left, and the Mandalorian in the first season of the Disney+ series “The Mandalorian.” Image courtesy Lucasfilm

Many ways, but only one ‘Way’

A recent episode titled “The Jedi” finds our titular Mandalorian (AKA Din Djarin, portrayed by a perpetually helmeted Pedro Pascal) en route to the planet Corvus. It is there he hopes to find the “Jedi” Ahsoka Tano (Rosario Dawson) and present her with “the child” (aka Baby Yoda, aka Grogu).

Doing so would finally bring an end to a quest bestowed upon him at the close of the previous season, when his Mandalorian superior instructed him to deliver the Force-sensitive child to a “race of enemy sorcerers.”

When Din protested, the superior shot back, “This is the Way.”

Regular viewers are well aware of our hero’s unapologetic dedication to this “Way,” a violent and sometimes vague belief system that insists on always brandishing weapons and never removing one’s helmet in the presence of others. Din even sparked a meme when he revealed in the first season that the “Way” is just as doctrinal as it sounds, explaining, “I’m a Mandalorian — weapons are part of my religion.”

Religious themes are more pronounced this season, such as when Din learned his dogmatic beliefs are not shared by everyone who wears similar armor or calls the planet Mandalore home. Quite the opposite, one group of Mandalorians appears to consider him an aberration, explaining that as a “Child of the Watch,” he has been unknowingly reared in a “cult of religious zealots” who insist theirs is the only true “Way of the Mandalore.”

Such faith-speak has ample precedent in the galaxy far, far away. Multiple characters refer to the Jedi “religion” in the films. Even George Lucas has argued the Force was meant to have religious connotations, telling occasional religion journalist Bill Moyers in 1999 he hoped the films would “awaken a certain kind of spirituality in young people.”

But Lucas, who once described himself as a “Buddhist Methodist,” never made performative religious belief the central focus of his stories. Instead, religion is simply taken as a given for most spacefaring peoples, assumed to be an inextricable part of galactic life — much as it is for billions of real-life believers right here on Earth.

And just like in the real world, religion in the Star Wars universe is neither universally good nor irredeemably bad — but its effect can be powerful. 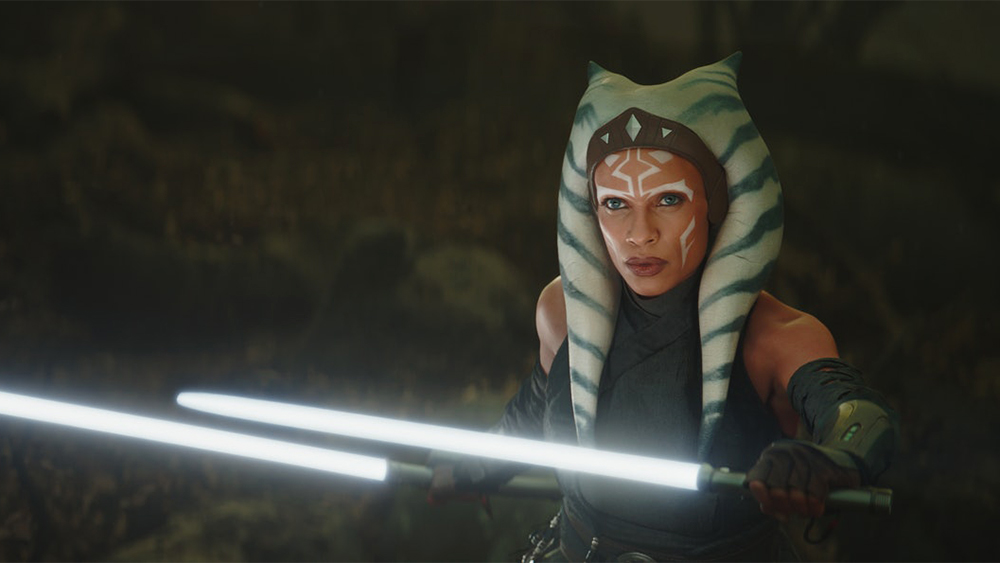 The scars of galactic holy war

An offhand reference to “the Watch” doesn’t need to be explained to establish Din as a lonely outsider, a recurring hallmark of his character arc. But a quick dive into the ever-expanding Star Wars canon points to a much grander religious subtext: According to animated Star Wars shows “Clone Wars” and “Rebels,” Mandalorians have long been a religious — and warlike — people who once violently expanded across the galaxy while adhering to the Way of the Mandalore.

These warriors kept expanding until they eventually encountered the Jedi, a group of seemingly magical sorcerers whose innate powers far exceeded that of (most) soldiers armed with simple blasters. Mandalorians likely saw their lightsaber-wielding foes as a threat that was equal parts physical and spiritual: Their beliefs and ways with the Force challenged a Mandalorian religious worldview that placed a high value on military superiority.

According to Dave Filoni, the Star Wars geek-turned-showrunner who worked on both the animated Star Wars shows and now “The Mandalorian,” the armor Din and others wear was developed as “a reaction to the Jedi … (a) people that had abilities they didn’t understand.”

The result was a galactic holy war. Lest you think that’s an overstatement, it’s worth noting the allusions to similar real-world religious conflicts aren’t exactly subtle: According to Disney, the sword-wielding Mandalorian warriors who fought the Jedi were literally called crusaders. And just like historical holy wars, the results were horrific: Although the Mandalorians were able to challenge the might of the Jedi, the conflict’s endgame was the almost complete destruction of Mandalore. Cowed by defeat, most of Mandalorian society embraced pacifism, with only small splinter groups — especially a band of extremists called “Death Watch,” presumably the group that took in Din — doggedly adhering to the old ways.

The Jedi, meanwhile, went on to become the architects of the Republic’s military machine, serving as generals during the Clone Wars. It was then that Ahsoka Tano, a female Togruta (read: alien with striped head-tails), became the Padawan of one Anakin Skywalker, learning the ways of the Force under his tutelage. But she eventually became disillusioned with the Jedi Order after it refused to trust her when she was wrongfully accused, and she ultimately left the fold entirely — although she continued to use her powers to defend the oppressed.

Anyone who made it through the Star Wars prequel trilogy knows the tragic events that followed: Anakin Skywalker eventually turned to the Dark side, became Darth Vader, led an assault on the Jedi temple and oversaw the slaughter of Jedi everywhere. Toward an interplanetary pluralism

All of that — along with four movies and at least one animated show — brings us to Din’s arrival on Corvus, a dusty, decrepit planet pockmarked with gnarled, nearly lifeless forests. Despite the passage of time, the legacy of the Jedi-Mandalore conflict is still palpable; Din, in fact, nominally accepts an offer by a local oppressive magistrate (Diana Lee Inosanto) to kill Ahsoka.

“The Jedi are the ancient enemy of Mandalore,” the Magistrate reminds Din before handing him a spear made of Beskar — an impossibly strong metal originally found only in Mandalorian armor. While the origin of the spear is never discussed, it’s easy to imagine it being forged by a Mandalorian armorer to fight Force-wielding foes of old.

Indeed, Din and Ahsoka’s first meeting is practically an homage to the ancestral conflict. Ahsoka, who easily dispatches multiple enemies earlier in the episode, instantly attacks Din. But she is kept at bay by his Beskar armor, which was engineered long ago to deflect lightsaber blades. Overwhelmed but experienced, Din uses his suit’s crafty hidden weaponry to fight her to a stalemate before finally blurting out he was sent to present her with the child.

The two still appear to be natural enemies and, in some ways, religious opposites. Din follows his faith with almost unquestioned devotion, whereas Ahsoka rejected her religious leaders years before. One, a zealot. The other, an apostate.

But as the dust settles and the two learn how Grogu, the child, was whisked away from the Jedi temple the night of the massacre, their religious similarities begin to emerge.

Both represent faiths embraced by societies that have long since fallen; the Jedi Temple is in ruins, and Mandalore, which was already ravaged before the rise of the Empire, has clearly endured additional violence at the hands of Emperor Palpatine. They both share a spiritual quest to right the wrongs of past leaders; Din’s faith circles around a lifelong effort to follow a “Way” others have left behind, and Ahsoka abandoned the Jedi Order while continuing to live out principles she believes the order failed to uphold.

And ultimately, they both live by theologies — sometimes written down, sometimes revealed moment by moment — rooted in common beliefs: Oppression is wrong, evil must be thwarted, and family, especially the kind you choose, is everything.

While they have different ulterior motives, perhaps it’s not all that surprising when they agree to team up and challenge a local despot who violently lords over the local population.

“A Mandalorian and a Jedi?” Din says. “They’ll never see it coming.”

To be sure, the collapse of Din and Ahsoka’s respective religions certainly helped the pair look past their differences. But we are reminded their refusal to be defined by the past is a choice, and defeat does not inherently inspire altruism: Before they attack the town, Ahsoka informs Din the Magistrate belongs to a people who were massacred during the Clone Wars, and has spent the rest of her life funneling her anger into an industry that helped craft the Empire’s war machine.

Thus, Din and Ahsoka’s subsequent success in liberating the town is a profound (if violent) testament to the power of a certain kind of religious pluralism, one where multiple faiths are able to operate fully but not antagonistically.

It’s an interesting turn given that pluralism, as CNN religion editor Daniel Burke recently pointed out, isn’t exactly one of Din’s innate instincts. Over the course of the show, he has repeatedly bristled when encountering other belief systems — especially those of other Mandalorians.

But Din has just as often found ways to translate those clashes into moments of cooperation (e.g., joining forces with the iconic Boba Fett in the show’s most recent episode), frequently fighting alongside those he disagrees with in pursuit of a common goal.

This is a religious tale we Earthlings spend less time discussing, but is more common than we admit. There are countless examples throughout history, including recent ones: When different religious groups — Jews, Muslims and immigrant-heavy religious congregations, among others — endured waves of hatred and harassment in 2016 and 2017, many forged relationships and historic alliances to push back against the vitriol.

At its best, Star Wars reminds us of these flickers of inspiration and reveals a bit of how real-world religion works: Ultimately, the greatest historical legacy of a faith isn’t the size of its temples, the scope of its power, how passionately it worships or even how cool its members look when waving lightsabers.

It’s how its devotees treat other people, including — or, perhaps, especially — those least like themselves. 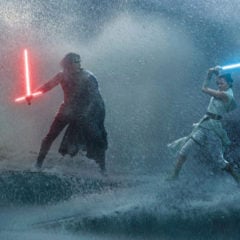 Alternative Faiths
How we all became Jedis 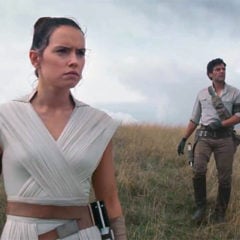