ORLANDO (RNS) — Comparing the magnitude of Shoah, the World War II extermination of European Jewry, to any other mass killings is always emotionally and intellectually fraught.

The question is, are the lessons of the Holocaust unique to the Jewish people, or universal for humanity?

Even the Roma, homosexuals and people with disabilities, who also died in the Nazi concentration camps, although in lesser numbers, are often relegated to a historical asterisk.

Consider other grotesque mass killings in past centuries: Native Americans in the Western Hemisphere, Armenians, Ukrainians, Cambodians, Rwandans, farmers of southern Darfur, the Yazidis of Iraq, the Rohingya of Myanmar. Those victims, their survivors and descendants maintain that they, too, have a valid claim to the designation of genocide — a term coined in 1944 by Raphael Lemkin to describe the Nazi murder of the Jews — and at least to the lower-case designation of “holocaust.”

Yet some Jews — many, perhaps most — believe the Shoah is a singular event that cannot and should not be compared to any others at the risk of diluting its significance.

“We are facing a very serious problem of universalization when dealing with the Shoah, and this is something that’s very, very important that we fight against,” Efraim Zuroff, famed Nazi hunter and director of the Israeli office of the Simon Wiesenthal Center, told World Israel News.

For these critics, the only acceptable contemporary relevance for Holocaust memorials and research centers around the country and the world is the rise in violent anti-Semitism, largely by neo-Nazis, the alt-right, Islamist terrorists and Holocaust deniers.

“The focus of Holocaust centers must be on anti-Semitism if we are going to learn anything,” said Alex Grobman, senior resident scholar at the John C. Danforth Society and co-author of “Denying History: Who Says the Holocaust Never Happened and Why Do They Say It?”

This issue becomes especially acute when more expansive comparisons and lessons are taken from the Shoah. That is, to such historical phenomena as the burning of medieval European witches and African slavery, or, in the modern context, to racism, ethnic cleansing, homophobia and even bullying.

“To equate the Holocaust with other acts of racism in this country is a disgrace,” said Grobman. “To do so distorts this history of this unprecedented event, demeans those who died and deprives us from learning how to fight this insidious tendency of man to annihilate their fellow man.” 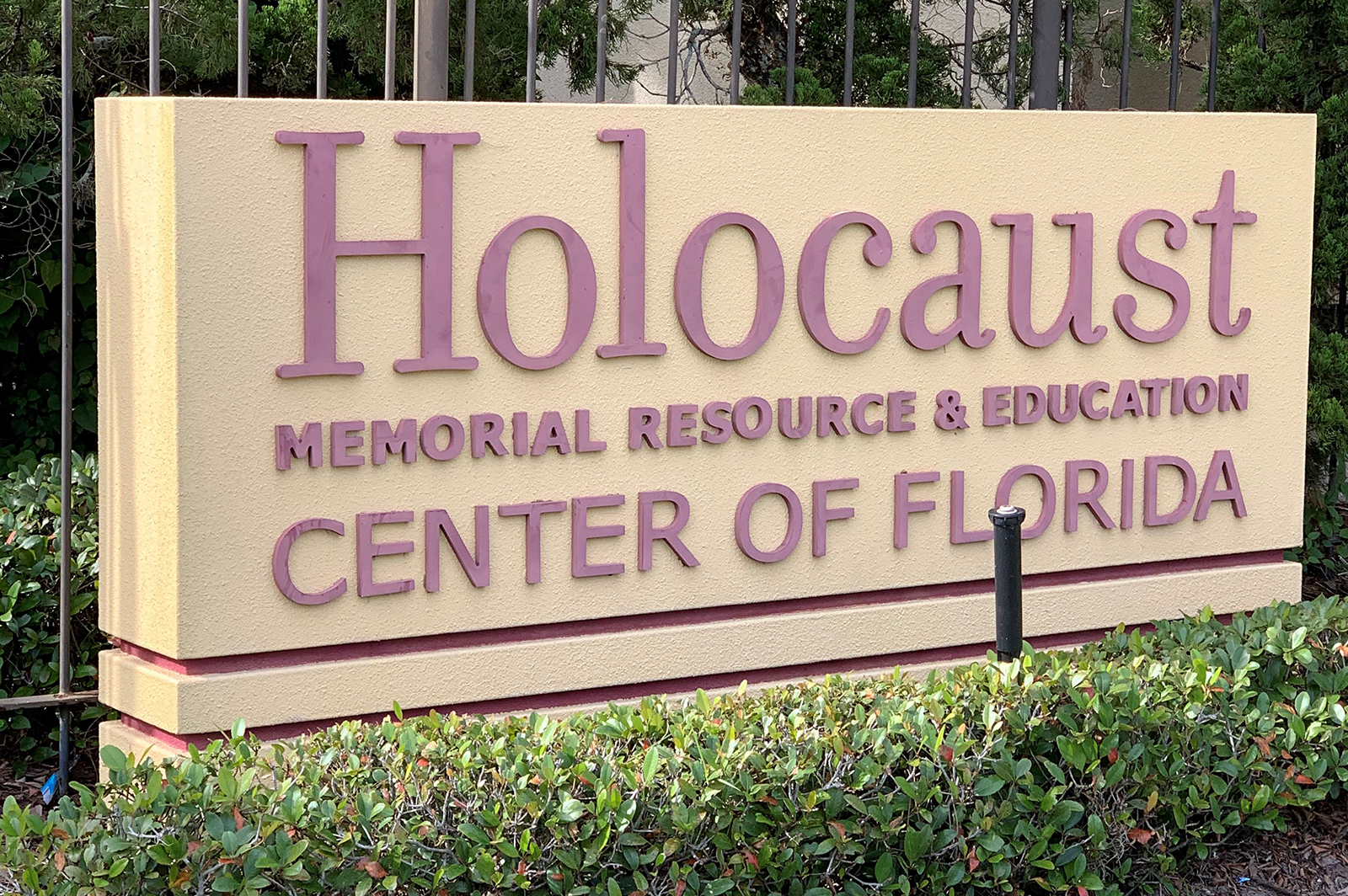 This issue flared again in late November at the Holocaust Memorial Resource & Education Center of Florida, in the suburb of Maitland, just outside Orlando.

In this case, the controversy was sparked by the opening of the center’s current bilingual exhibition, “Uprooting Prejudice: Faces of Change,” which runs through Jan. 31.

Shot by Minneapolis photographer John Noltner in the aftermath of the May 25 killing of George Floyd by police, the exhibit consists of 45 large-format black-and-white photo portraits of racially diverse subjects, with a single moving quotation from the speaker.

However, neither Floyd himself nor the circumstances of his death appear in the exhibit, facts that eluded critics who neither visited the center nor contacted the staff for comment.

Mixing such careless internet “journalism” with right-wing ideological mischief-making is an all-too-familiar recipe for trouble. In this case, the resulting toxic brew is giving the center a worldwide headache.

National and international headline writers on the web called the center’s new offering a “George Floyd Exhibit,” which inflamed all the usual twitter suspects, some still smarting from the Black Lives Matter movement that was galvanized by the killing:

“George Floyd is added to a Holocaust museum?” tweeted Ezra Levant (@ezralevant), of the site Rebel News, on Nov. 22. “That trivializes and distorts the Holocaust and its six million Jewish victims. And it grotesquely implies that American police are Nazis.”

The right-wing website Breitbart called it “a tribute to Floyd” that attempts “a shocking parallel.” The Daily Caller said the exhibit was “dedicated” to Floyd. American Renaissance described the purpose of the exhibit as “to honor George Floyd.”

Linda Olmert, a former board member at Yad Vashem, told World Israel News the Orlando exhibit “is in fact nothing less than a false quest for universalism that criminally diminishes the intransigent uncompromising racism towards the Jewish people.”

In a column for the Jewish Journal, Stephen Smith, director of the University of Southern California’s Shoah Foundation, came to the center’s defense.

The main question, he wrote, is “whether a museum established to remember Jewish victims of the Holocaust should explore issues of contemporary social justice.”

Smith, who established both the first Holocaust center in England and the Kigali Genocide Museum in Rwanda, argued: “The Holocaust was a singular evil, and likening other events to it — no matter how horrible — diminishes its truth. But that is not what the Orlando museum has done. There is no suggestion in it that the museum, the photographer or his subjects are comparing anything to the Holocaust.” 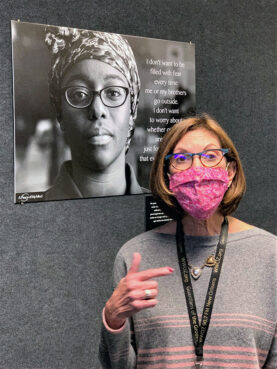 Still, when Smith recalled his involvement in establishing the Cape Town Holocaust Museum in South Africa in 1999, he said, “We recognized there that the Holocaust is all about racism taken to its extreme. A Holocaust museum is the very place to talk about racism.”

And recently, Smith took this position into the present, penning an opinion piece for the Jewish Daily Forward entitled, “China is committing a genocide,” about the persecution of the Uighurs in Xinjiang Province.

The current controversy comes at precisely the wrong time for the Florida center.

With the backing of the city of Orlando, the 7,000-square-foot center (where I volunteer to help judge annual student essay contests) is in the midst of a $60 million expansion to downtown. And it has recently entered into a partnership with the USC’s Shoah Foundation, established by Steven Spielberg.

Despite this blowback, the center’s director, Pam Kancher, defended the exhibit, saying it was central to the vision of Tess Wise, a Holocaust survivor and the center’s founder.

“Our mission has always been to use the history and the lessons of the Holocaust to build a just and caring community, free of anti-Semitism and all forms of prejudice and bigotry,” Kancher said in an interview at the center.

As if to emphasize the point for universality, immediately following the George Floyd killing, the Museum of Jewish Heritage and Holocaust in New York published this quote from Elie Wiesel: “Wherever men and women are persecuted because of their race, religion, or political views, that place must — at that moment — become the center of the universe.”

(Orlando-based religion writer Mark I. Pinsky is author of “A Jew Among the Evangelicals: A Guide for the Perplexed.” The views expressed in this commentary do not necessarily reflect those of Religion News Service.)

News
‘Silence is golden’: Vatican archivist defends Pope Pius XII’s response to the Holocaust
Follow us on Facebook!
Submit your photos to RNS