(RNS) — I know I speak for people everywhere when I say that 2020 has been the longest year in history. The pandemic. The U.S. presidential election. The recounts.

And yet, there are many comforts to consider. Health, for those of us who have survived or avoided the virus. Loved ones. Hope for the future.

One of the real pleasures of this year for me was enjoying three ground-breaking books of Sikh history written by Sikh women. The subject itself is consistently underrepresented and traditionally dominated by the voices of men. Each of the books published this year is distinctive in style and scope, and yet any religion or history nerd can enjoy all three.

The Wheat Fields Still Whisper: Faith, Gender, and Activism in the Punjab Conflict
By Mallika Kaur

As I write, Indian farmers are leading a historic protest on the streets of New Delhi, opposing new agricultural laws that benefit large corporations and harm small farmers. Most analyses of the situation remain limited to the immediate issues, but, as with most uprisings, there is far more to it than meets the eye.

Kaur’s “The Wheat Fields Still Whisper” unlocks the complexities behind the current crisis. She explains why much of the movement is being led and driven by Punjabi Sikhs, guiding us through the neglect, abuses, resistance and resilience that the Punjab’s Sikh population has withstood in the immediate past decades to deliver an understanding of what’s going on in India right now.

Kaur’s vehicles are three of Punjab’s inspirational human rights defenders: Baljit Kaur, Justice Ajit Singh Bains, and Inderjit Singh Jaijee. Their relative privilege has allowed them to support their community in violent conflict, and their life stories pull in dozens of other everyday heroes who haven’t been written about thus far, or in this detail.

She tells the story beautifully as well, mixing incisive analysis with prose that makes it easy for the reader to not only understand what is happening, but to empathize with those who are going through it. It’s a masterful work of contemporary history and a joy for anyone interested in discovering the Punjabi Sikh community and their psyche.

Royals and Rebels: The Rise and Fall of the Sikh Empire
By Priya Atwal

Perhaps my favorite period in Sikh history is the time from the late 1400s to the early 1700s, when the 10 Gurus lived. But a close second is the period of autonomous rule known as the time of the Sikh Empire. The glorious reign began when Maharaja Ranjit Singh wrested control of Punjab from the Mughal overlords in the late 18th century. Sikh rule expanded rapidly, stretching from Tibet to Afghanistan before eventually being felled by the British just before the 20th century dawned.

Despite its storied past, the Sikh Empire is little mentioned today. Priya Atwal’s Royals and Rebels not only restores this period to historical memory but also gives it dignity.

Atwal’s splendid historical scholarship brings forward voices and stories that have been marginalized in previous tellings, delivering a fascinating story full of women and even children whose contributions are as essential as any male ruler. But it’s no slow crawl through sociological data: Atwal’s is a chronicle of politics, royalty, family and intrigue with all the makings of a series for Masterpiece Theater.

The First Sikh: The Life and Legacy of Guru Nanak
Nikky-Guninder Kaur Singh

For decades, Kaur Singh has been the preeminent feminist writer in Sikh studies — stress on writer: Though an academic historian, she leans into her poetic sense, an ability that makes her latest book, “The First Sikh,” an enchanting account of the life and legacy of Guru Nanak, the founder and first guru of the Sikh tradition and songster-poet himself.

Instead of the typically dry prose of academic historical writing, Singh fuses translations of first-hand testimony, oral histories and Guru Nanak’s own writings to produce the best and most accessible modern account of Guru Nanak’s worldview and teachings. 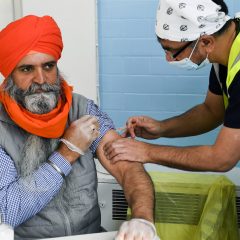