(RNS) — It’s 11:11 on a recent Sunday morning and The Proverbial Experience is just getting underway. “Greetings my loves!” proclaims the Rev. Lyvonne Proverbs Briggs, the founder of this weekly spiritual gathering on Instagram. “Anybody got a hallelujah in your spirit?”

As the congregation comes online, Briggs, from her home in New Orleans, greets each person by name as prerecorded gospel music plays. She frames herself in front of a makeshift altar with an assortment of crystals and a sign that reads, “God is love.”

The worship service, with music and Bible readings, initially feels similar to the Black Episcopal church of Briggs’ youth, but within a few minutes it takes a turn.

Briggs burns Palo Santo — literally, “holy wood” — and sage. She pours libations, a West African ritual used to honor ancestors — not only her congregation’s, but freedom fighters, cultural and spiritual figures, victims of police violence. As each name is called, water is poured and sealed with an exclamatory ashe, an amen from the Yoruba of Nigeria that means “and so it is.”

Briggs, who has degrees from Yale Divinity School and Columbia Theological Seminary, calls her African-centered form of spirituality “Christian adjacent.” It is drawn freely from divination practices such as astrology and tarot, while in her sermons she makes references to the African deities Oshun, Obatala and Orisha. “I am not your mama’s preacher. I honor the great rituals of my childhood faith,” she said. “But now that I have decolonized my religion, I have a duty and an obligation to present our ancestral wisdom and Indigenous spiritual practices in a way that is fully integrated with who I am.”

Most of those logging on to The Proverbial Experience on Sundays are Black women who share Briggs’ sense of authentic tradition. Many were raised in Baptist, Pentecostal or AME traditions but have since left the church and are on an African spiritual walkabout of sorts.

Briggs pushes them to embrace themselves fully while interrogating their faith and culture. “The fabric that binds us together is a quest, a revolution and a rebellion for liberty, justice, restoration and wholeness,” she told her flock, whom she calls “The Proverbial Kin,” in a sermon just after the presidential election.

“When you adopt an African-centered practice, you realize how deeply embedded it is in your being,” she said. “In this moment, African descended people have had enough of trying to contort to a system that was built to annihilate us. If we are going to be truly free and liberated, it has to include our religion and spirituality (of our ancestors).”

One of those who tunes in to The Proverbial Experience is Alicia Hudson, 37, who grew up attending Baptist and Pentecostal churches where people spoke in tongues and Jesus had blond hair and blue eyes. Now a resident of Brooklyn, New York, she no longer attends church but retains a love for the Book of Psalms and said she can find inspiration in a T.D. Jakes sermon.

But in recent years she’s integrated African spiritual and cultural traditions into her life. She’s studied Yoruba and Hoodoo, a form of folk magic that evolved in the pre-Civil War American South as a form of protection and resistance for the enslaved.

Hudson has assembled an ancestral altar in her home with photos of her grandparents and the names of her great-grandparents. Her new traditions say that these ancestors act as guides, protectors and healers, providing physical, mental and emotional support. Hudson makes regular offerings of fresh flowers, water and coffee.

“It helps me feel more connected to them,” she said. “I’ve learned that our ancestors are close to us in the spirit realm.”

Hudson sees ancestral veneration, a common theme in Eastern religion as well, as a way to reclaim a practice that was subverted during slavery. “It’s been a beautiful process and a part of our healing,” she said.

This blending of Christianity with African religious traditions is not new. Indeed, scholars would point out that African religious ideas and practices, brought with the enslaved people from the 1600s on, are inextricable from American Protestant Christian practice, white and Black. Briggs’ gradual evolution toward The Proverbial Experience began when she attended an African Presbyterian Church in Georgia that was blending African religious traditions and Christianity. She counts as influences the Rev. Maisha Handy at the Interdenominational Theological Center in Atlanta and the work of the Rev. Melva Sampson, a theologian at Wake Forest University.

What’s different, says Darnise Martin, associate professor of African American studies at Loyola Marymount University in Los Angeles, is where it is happening: in public forums and innovative churches such as Briggs’.

During slavery, any deviation from the Christianity of the slaveholder was forbidden and considered illegal. The establishment of hush harbors, a secluded area in the woods where slaves would meet in private, provided opportunity for them to worship as they wished, but always under potential threat of punishment.

Breaking with traditional Christian practice can take courage. Hudson said she can’t share her new way of worship with her family. Spells and rituals associated with candle magick “is scary for them,” said Hudson. “They don’t understand that it goes beyond religion. What I’ve been doing on my own is reconnecting with my culture and learning the different ways that we celebrate God.”

Dee Blair, 41, has found similar freedom in experimenting with spiritual forms such as oracle cards, similar to tarot, which were prohibited in the mostly Caribbean Pentecostal church in the Bronx that she attended with her mother and siblings. “The biggest thing now is releasing whatever negativity has been attached to that,” she said. 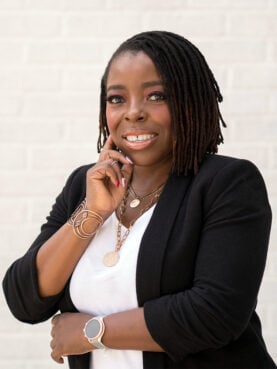 The Proverbial Experience is centered on people who look more like her. “I grew up with Black ministers that are men,” said Blair. “I don’t usually see myself represented in this arena. Here’s a woman who is talking bodily love, playing hip-hop and working with divination practices and melding them with Christianity.”

As free as they feel, some in the congregation are still struggling for the right words for their new spiritual life. “A lot of us still have churchy vernacular,” said Fulei Ngangmuta, who emigrated from Cameroon with her Christian parents as a baby. “Most of us probably won’t call ourselves Christians. But we do understand the traditions that we’re walking out of and we tap back into our spiritual origins of where we come from.”

Through relatives in Africa and online research, Ngangmuta, 40, traced her ancestry to the Kom people, in northwestern Cameroon. “The idea of all of this was to claim all these pieces of myself that had been suppressed or not spoken about because they were taboo,” she said. “I wanted to be free to be my full self.”

This story is one in a series by Religion News Service about New Religious Movements in American religion, produced in partnership with Sacred Writes, a Henry Luce Foundation-funded project hosted by Northeastern University that promotes public scholarship on religion.