WASHINGTON (RNS) — Hours before he takes the oath of office Wednesday (Jan. 20) as president, Joe Biden is reportedly slated to attend a worship service at the Cathedral of St. Matthew the Apostle, commonly known as St. Matthew’s, with a bipartisan group of members of Congress and other politicians in attendance.

The decision is something of a break from tradition: While it’s hardly unprecedented for incoming presidents to attend a service the day of their inauguration, many have chosen to cross Lafayette Square to St. John’s Episcopal Church, often called the “Church of the Presidents” (and now famous as the place where President Donald Trump held up a Bible for a photo).

It’s hardly surprising, however, that Biden, who will be the second Catholic U.S. president, has chosen to prepare for his presidency at the seat of the archbishop of Washington, Cardinal Wilton Gregory, the first African American cardinal. Here are a few other highlights of St. Matthew’s august history.

Pope Francis visited there in 2015

During Pope Francis’ trip to the United States in 2015, he visited St. Matthew’s to deliver a homily in which he implored U.S. bishops to reject “harsh and divisive language.”

Instead, he said, they should adopt an approach “which attracts men and women through the attractive light and warmth of love.”

St. Matthew’s was the site of John F. Kennedy’s funeral 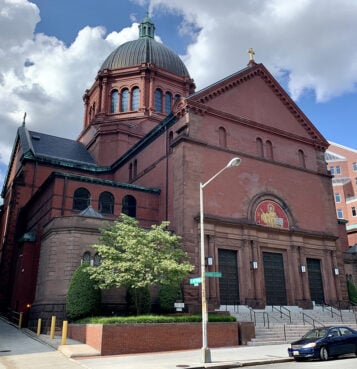 The Cathedral of St. Matthew the Apostle in Washington on Aug. 19, 2020. Photo by APK/Creative Commons

The church was part of the funeral proceedings for President John F. Kennedy, the first Catholic president, after his assassination in 1963. After Kennedy lay in state at the U.S. Capitol, his body returned to the White House and then was brought to St. Matthew’s, where various world dignitaries sat in attendance.

In 2005, the cathedral hosted a service for the late Chief Justice William Rehnquist. The legal giant was Lutheran, not Catholic, but the service was allowed due to a provision that allows Catholic sites to be used for non-Catholic rites.

It hosts a prestigious ‘Red Mass’ every year

Each year St. Matthew’s hosts the “Red Mass,” a service held the first Sunday in October for lawyers and judges. While Red Masses are celebrated throughout the Catholic world, the Washington iteration is known for attracting prominent dignitaries such as Supreme Court justices — including Rehnquist, who only missed the Red Mass twice during his 33 years on the court.

It has a crypt for archbishops

The cathedral is also home to an archbishops’ crypt, which is exactly what it sounds like: a place where prominent Catholic clerics are put to rest. According to its website, it includes the remains of at least two former archbishops of Washington: Cardinal Patrick O’Boyle and Cardinal James Hickey, who was interred there in 2004.

Another archbishop of Washington, William Wakefield Baum, was also reportedly interred there.