(RNS) — Each week Religion News Service presents a gallery of photos of religious expression around the world. This week’s photo gallery includes a voodoo fashion show in Haiti, preparations for Candlemas Day in Mexico and more. 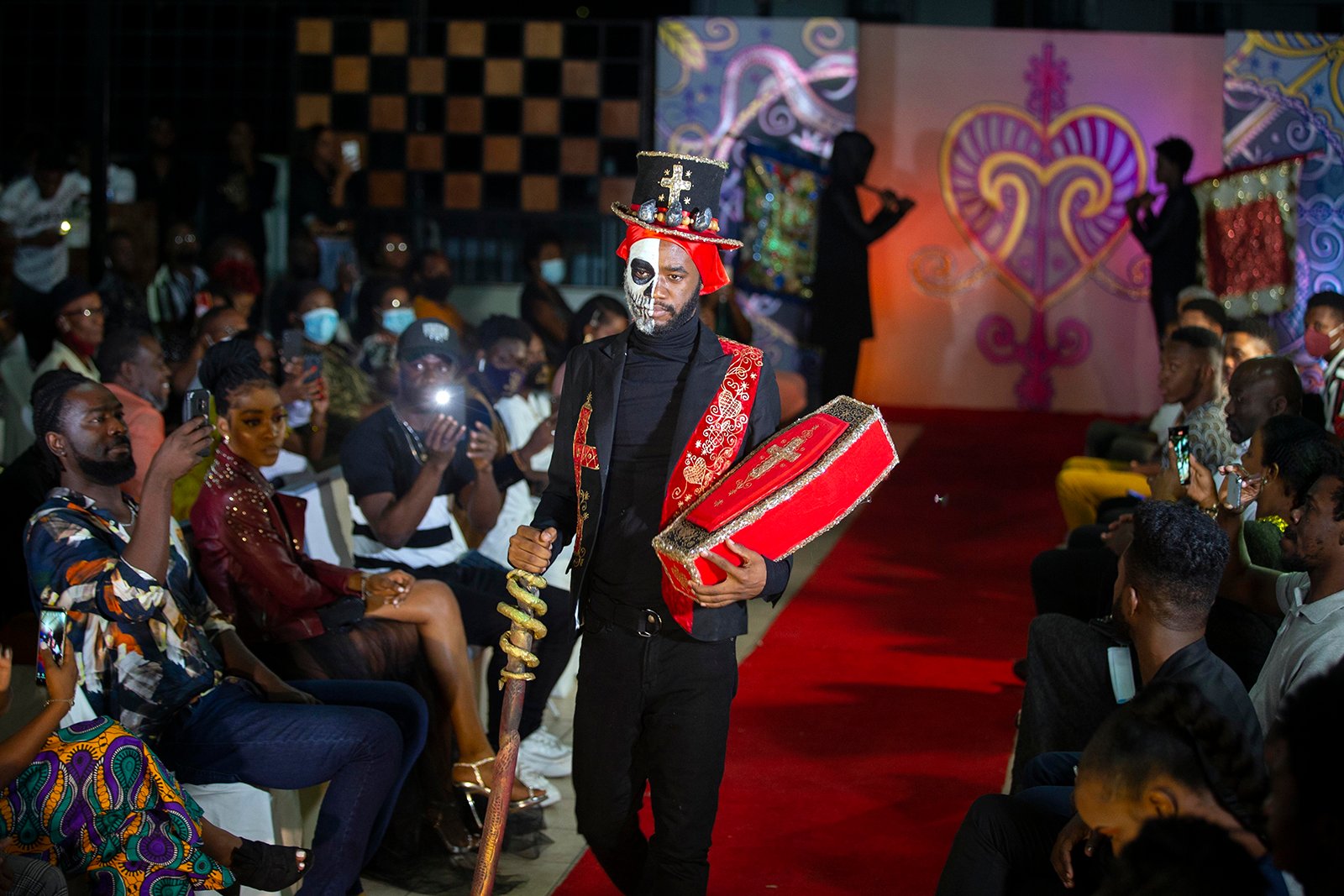 A model wears a creation by Haitian designer Mackenley Darius during a voodoo fashion show in Port-au-Prince, Haiti, Thursday, Jan. 21, 2021. Mackenley, a former student of the National School of the Arts, is working to promote his country’s culture, most especially voodoo, a religion that he feels is misunderstood. (AP Photo/Dieu Nalio Chery) 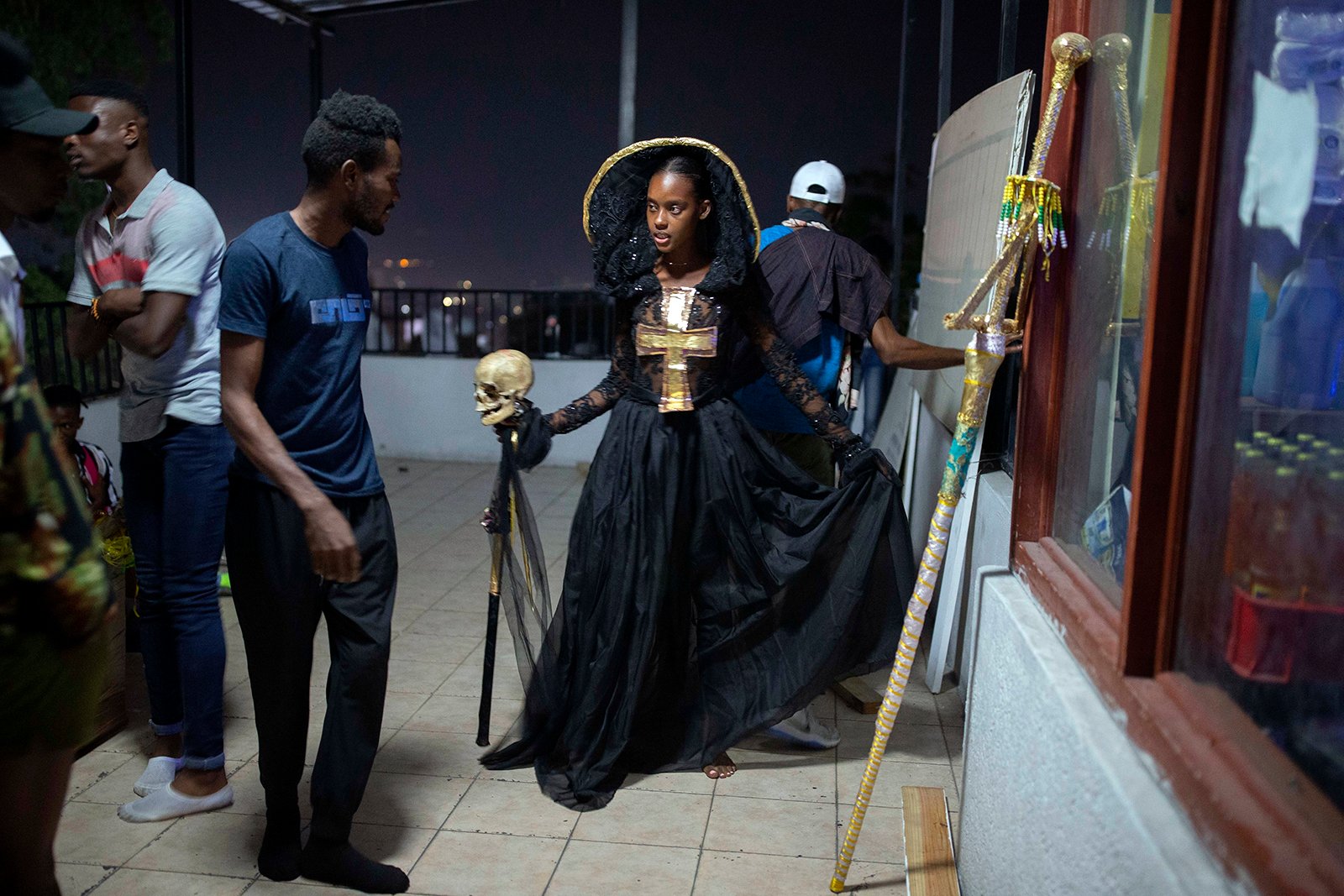 Haitian designer Mackenley Darius, left, talks with a model wearing one of his creations during a voodoo fashion show in Port-au-Prince, Haiti, Thursday, Jan. 21, 2021. Mackenley, a former student of the National School of the Arts, is working to promote with the help of friends, artists and designers, his country’s culture, most especially voodoo, a religion that he feels is misunderstood. (AP Photo/Dieu Nalio Chery) A Shariah law official uses a rattan cane to whip one of two men convicted of homosexual sex in Banda Aceh, Aceh province, Indonesia, Thursday, Jan. 28, 2021. Two men in the conservative Muslim province were caned 77 times each after neighbors reported them to the Shariah religious police for having sex. (AP Photo/Riska Munawarah) Nepalese Hindu devotees offer prayers during Madhav Narayan Festival along the banks of the Hanumante river in Bhaktapur, Nepal, Thursday, Jan. 28, 2021. During the festival, devotees recite holy Scripture dedicated to Hindu goddess Swasthani and Lord Shiva. Unmarried women pray to get a good husband while those who are married pray for the longevity of their husbands and observe a month-long fast. (AP Photo/Niranjan Shrestha) A Nepalese Hindu devotee offers prayers during the Madhav Narayan Festival in Bhaktapur, Nepal, Thursday, Jan. 28, 2021. During the festival, devotees recite holy scriptures dedicated to Hindu goddess Swasthani and Lord Shiva. Unmarried women pray to get a good husband while those married pray for the longevity of their husbands by observing a month-long fast. (AP Photo/Niranjan Shrestha) 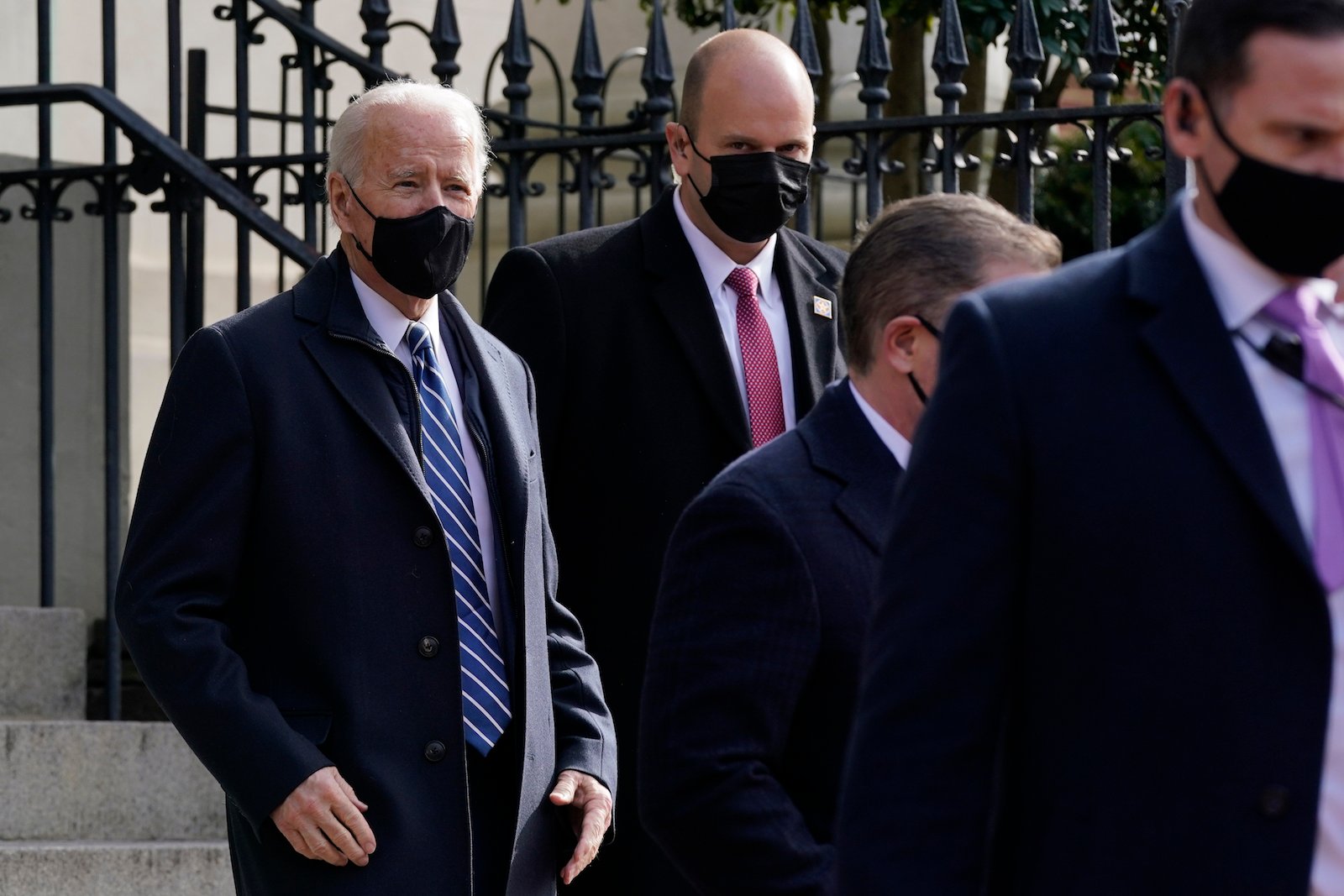 People line up next to the pews at a pop-up COVID-19 vaccination site at St. Luke’s Episcopal Church, Jan. 26, 2021, in the Bronx borough of New York. (AP Photo/Mary Altaffer) 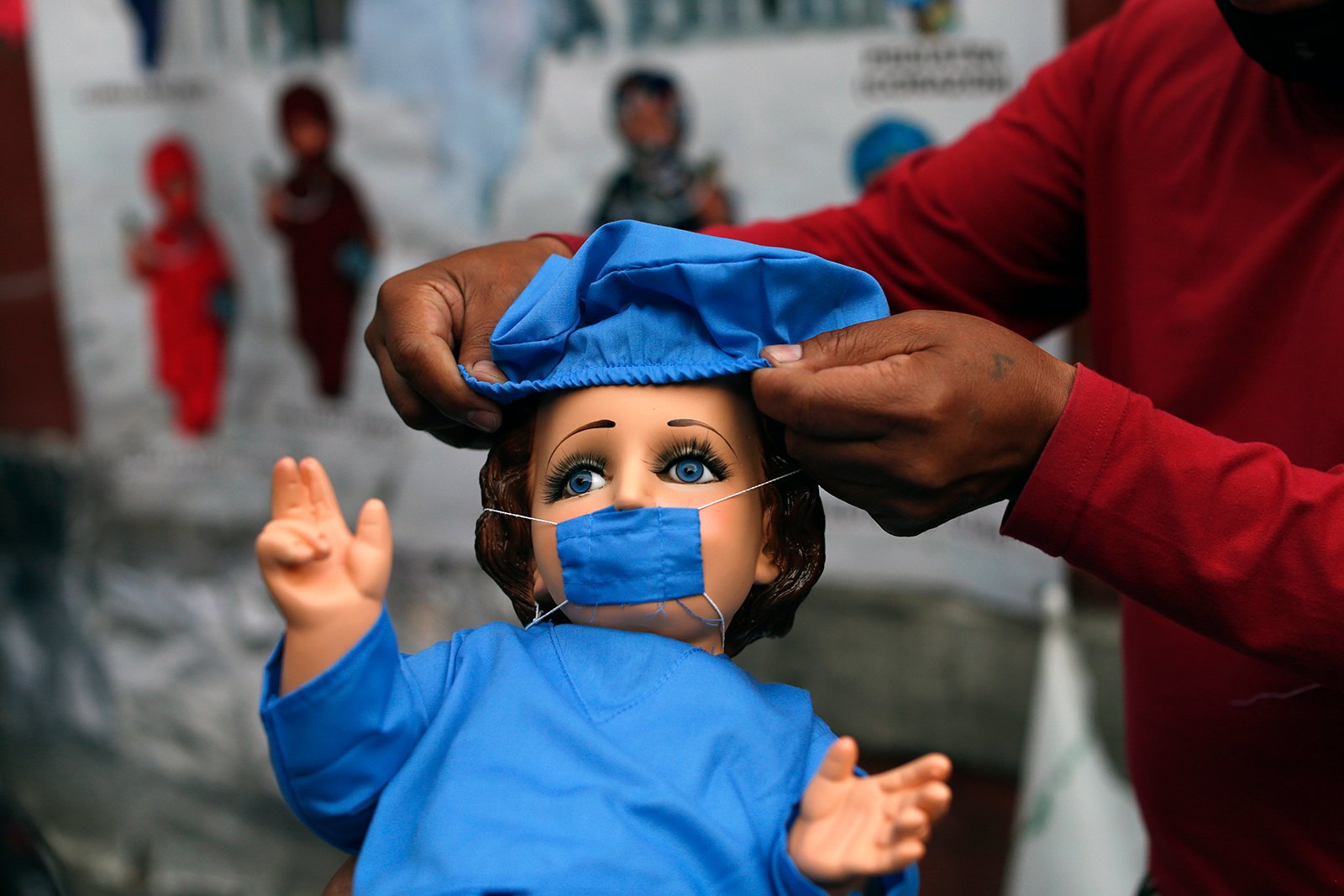 A street vendor dresses a baby Jesus figurine as a doctor to advertise coronavirus-related Baby Jesus outfits available for sale in Mexico City, Wednesday, Jan. 27, 2021, ahead of the Feb. 2 celebrations of “Dia de la Candelaria,” or Candlemas Day. Vendors said that while some customers find references to the ongoing COVID-19 pandemic morbid, others want a way to give thanks for family members having overcome the virus. (AP Photo/Rebecca Blackwell) Fernando Guadalupe Mondragon Cortes, right, retouches the paint on a baby Jesus figure after its broken arm was reattached by restorer Alejandro Capetillo, left, at “Hospitalito de Ninos Dios Gaby,” Spanish for the Gaby Little Baby Jesus hospital, in the center of Mexico City, Thursday, Jan. 28, 2021. As Mexicans prepare to celebrate “Dia de la Candelaria” or Candlemas Day amid a surge in the COVID-19 pandemic, baby Jesus restorers say their work is more in demand than ever, with a weeks-long waiting list for major repairs. (AP Photo/Rebecca Blackwell) 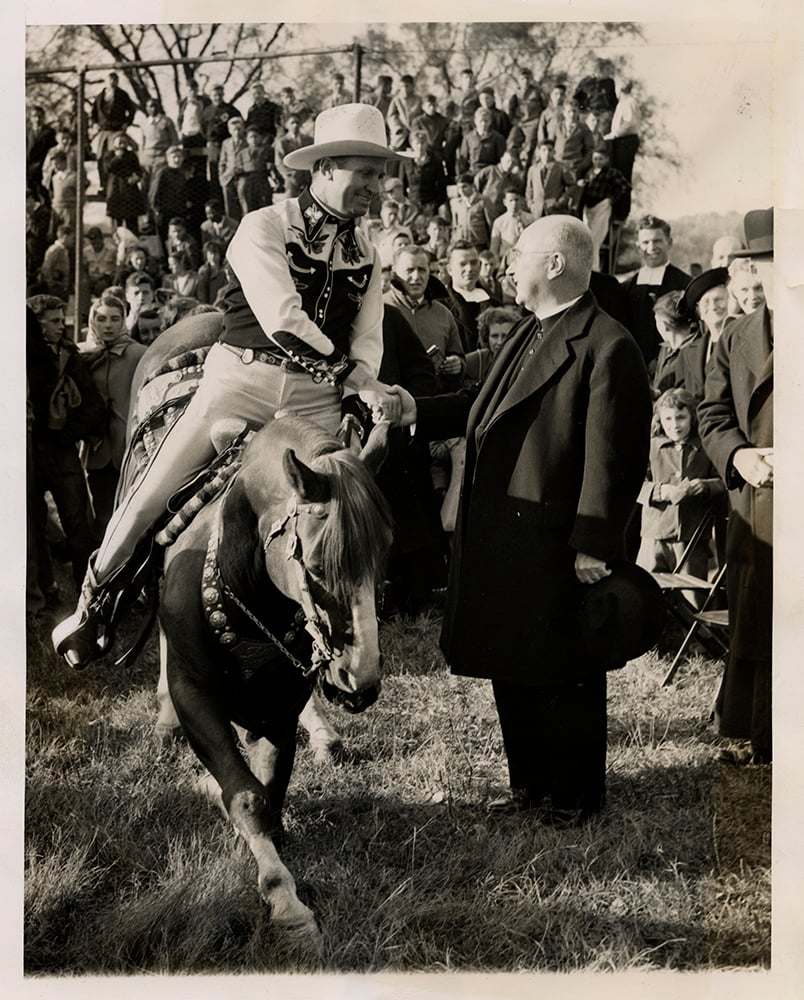 Gene Autry and his famous mount, Champion, salute Francis Cardinal Spellman, Archbishop of New York, during a visit at Lincoln Hall, a Catholic home and farm school for boys, in Lincolndale, New York, in 1948. The cowboy and a few other members of a rodeo in New York City performed for the boys at the camp. RNS archive photo. Photo courtesy of the Presbyterian Historical Society 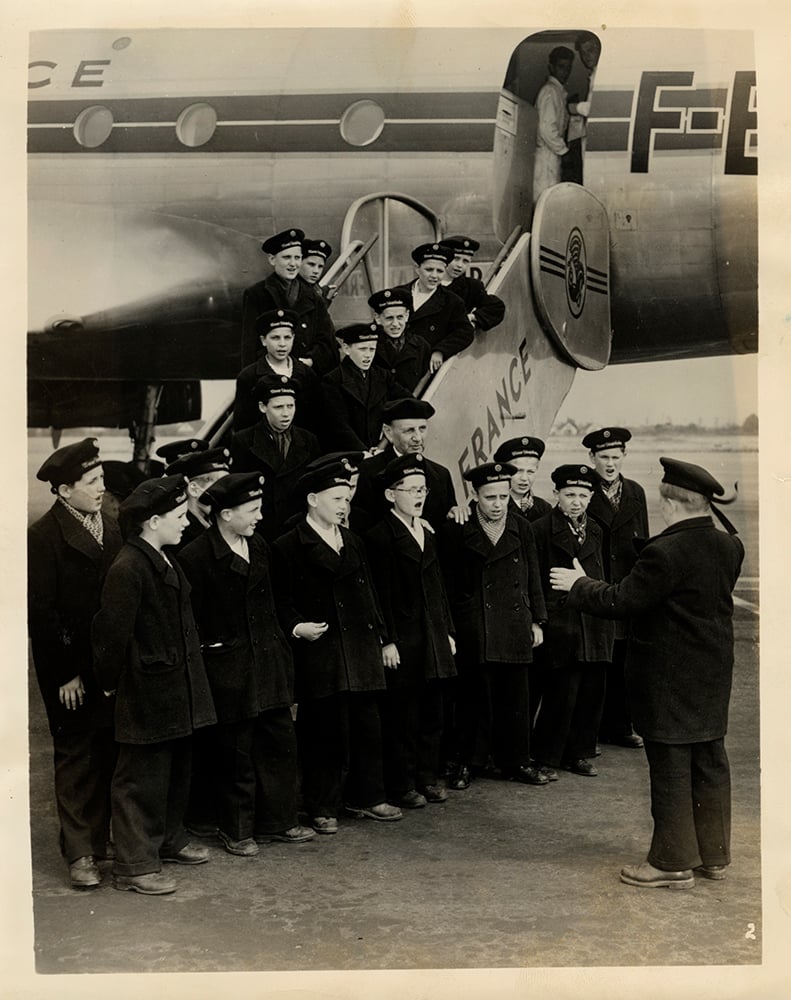 The Vienna Boys Choir performs on the tarmac in New York City after arriving there in 1948 on a 22 week concert tour of United States and Canada. RNS archive photo by Sol Hurok. Photo courtesy of the Presbyterian Historical Society