The campus of Belmont University in Nashville, Tennessee. Photo by Lahti213/Creative Commons

Jones will succeed Belmont President Bob Fisher, who is retiring in May after two decades at the helm of the fast-growing university.

Jones was tapped for a second stint as dean of Duke’s divinity school two years ago, after first serving as dean from 1997 to 2010. During that time he set records for gifts to the school and oversaw a major building expansion. He is widely recognized for his entrepreneurial leadership and fundraising ability.

He will take over a university that has tripled its enrollment to 8,200 students over the past two decades and has risen to national prominence since Fisher became its president.

Fisher’s legacy includes a recently announced College of Medicine and multiple construction projects, including the new performing arts center, two athletics facilities and the construction of 11 residence halls. In October, the university hosted a presidential debate between then-President Donald Trump and his Democratic challenger, Joe Biden. 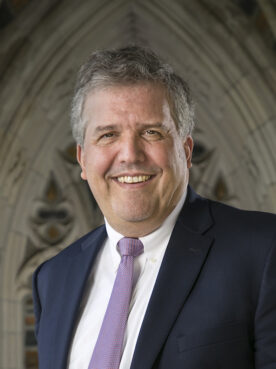 Jones said the growth and trajectory of Belmont enticed him to consider the move.

Belmont College was acquired by the Tennessee Baptist Convention in 1951 and for three decades was led by a local Baptist pastor. But following a 2007 lawsuit, the university broke away from the convention to become independent. It is now considered the country’s largest ecumenical Christian university, attracting. both Protestants and Catholics.

“When the school separated from the Tennessee Baptist Convention they didn’t want to become post-Christian or secular,” Jones said. “They wanted to remain a faith-based university, but doing so in ways that embrace the broad range of Christian traditions. I, as a United Methodist, will represent that as president. ”

Unlike Fisher, who holds a Ph.D. in economics and management, Jones has expertise in theology and is a widely respected scholar. He has written or edited 19 books, including the recently released, “Navigating the Future: Traditioned Innovation for Wilder Seas” (with Andrew P. Hogue).

At the divinity school, Jones is known for coining the phrase “traditioned innovation,” which he has described as “a habit of being and living that cultivates a certain kind of moral imagination shaped by storytelling and expressed in creative, transformational action.”

Jones said that concept was a good fit for Belmont, which he said has an entrepreneurial spirit.

Jones has served in other leadership roles. Between 2010 and 2018, he was vice president and vice provost for global strategy at Duke University. For a year, he served as provost and executive vice president of Baylor University in Texas.

The appointment was announced by Belmont on Monday (Feb. 1).

Jones’ interim successor at Duke Divinity will be Edgardo Colón-Emeric, now the associate dean for academic formation and director of the divinity school’s Center for Reconciliation. A native of Puerto Rico, Colón-Emeric has participated in ecumenical dialogue between Roman Catholics and United Methodists. He has also written about St. Oscar Romero and his theological vision.

READ: For many schools, the Master of Divinity degree is moving online for good

News
In a new documentary, Will Willimon puts his preaching toolbox to the test
Follow us on Facebook!
Submit your photos to RNS