The former representative from Massachusetts will serve as a “special senior adviser” to the campaign, which is co-chaired by the Rev. William Barber II and the Rev. Liz Theoharis.

Barber announced Kennedy’s role in a livestream on Monday, saying it developed after the politician called up the campaign to ask how he could help. Barber said Kennedy was brought on board “specifically to make sure” activists secure a “White House-level” meeting on issues related to poverty with President Joe Biden, Vice President Kamala Harris and administration officials.

“I’ve been an admirer of the Poor People’s Campaign for years,” Kennedy told Religion News Service on Monday, adding that working with the group is an “incredible honor.”

“I think what is unique about the Poor People’s Campaign and our leadership is … it’s the framing of morality. It’s the fact that it is done in a nonpartisan way, an organization led by people of faith that is fighting for justice,” he said.

Kennedy, whose term ended in Congress in January after he lost his Democratic primary in 2020 for U.S. Senate, has since announced a new Democratic political action committee and inked a commentator contract with CNN.

He said he intends to help Barber and others influence lawmakers in Congress, explaining he will offer an insider’s understanding “of not just the legislative process, but of the individuals within the chambers of the House and the Senate — my belief as to who they are, not just professionally, but personally. Not just the issues they care about, but why.”

Leaders from the Poor People’s Campaign met with incoming Biden administration officials in December during the transition and outlined a liberal-leaning 14-point policy platform that ranged from protecting voting rights to expanding health care access to a broad-based plan to help low-income people impacted by the ongoing coronavirus pandemic.

Kennedy said the platform resonates with him in general, but he is especially interested in helping pass a $15 an hour federal minimum wage to help counteract “economic challenges … and economic exploitation” in the U.S.

Like many participants in the Poor People’s Campaign, he cited his faith as informing his activism.

“My faith is important to me,” Kennedy said. “I was brought up and raised Catholic. And at the heart of that teaching — at least my interpretation of that teaching — is this foundational respect for the dignity of our fellow human beings. That we’re all made in the image of God.”

Affiliation with the Poor People’s Campaign is something of a tradition in the Kennedy family. Joe Kennedy’s grandfather, former Attorney General and U.S. senator from New York Robert Kennedy, was reportedly part of early conversations for what would become the original Poor People’s Campaign, which was launched by Martin Luther King Jr. in 1968. When King was assassinated that year, anti-poverty activists marched on Washington anyway and set up a tent encampment they dubbed “Resurrection City.” And when the elder Kennedy was also assassinated shortly after they arrived, his funeral procession passed through the sea of tents on the way to Arlington Cemetery so the activists could pay their respects.

A mural erected at Resurrection City, now on display at the Smithsonian, reads: “John (F. Kennedy) the Catholic/ Martin the King/ Robert the Samaritan/ They bled so we may live and LOVE.”

“The issues the (Poor People’s) Campaign has always fought for have been important and motivating ones for other members of my family — and myself,” Joe Kennedy told RNS. 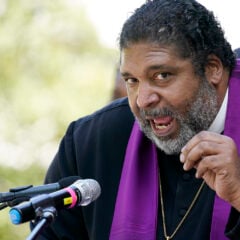 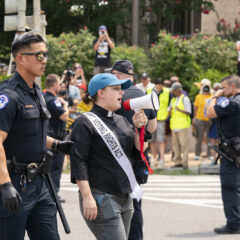 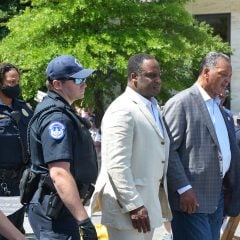