(RNS) — David French, the conservative evangelical writer and “Never Trumper,” admitted he was shocked by the Jan. 6 Capitol insurrection.

“I could see the violence forming,” he said. “But the actual takeover of the Capitol? Holy smokes!”

In the days afterward, he penned a series of commentaries for The Dispatch, the conservative outlet where he is senior editor, reflecting on Christian nationalism, patriotism and the roots of Christian rage.

French, who lives south of Nashville, Tennessee, holds a law degree from Harvard and used to work for two of the largest Christian legal firms, the American Center for Law and Justice and the Alliance Defending Freedom. In 2007, he enlisted in the U.S. Army, serving as a judge advocate during Operation Iraqi Freedom. Last year, he wrote a book, “Divided We Fall: America’s Secession Threat and How to Restore Our Nation.”

Religion News Service caught up with French to ask his unblinking perspective on the dangers of Christian nationalism, so prominent in the Capitol attack, and how the nation might begin to heal. The Q&A was edited for length and clarity.

You’re an evangelical Christian. When did you begin to depart from the mainstream in your perspective? 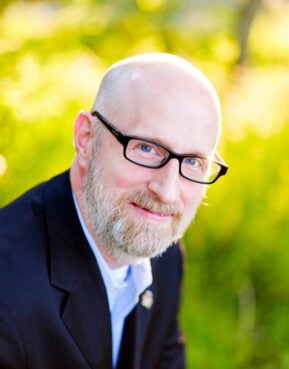 I haven’t changed my perspective on things like being pro-life or believing in strong religious freedom protections. But I stopped being a Republican after (Donald) Trump’s victory in the 2016 primary.

In 2007, much to my embarrassment today, I was speaking to a very conservative convention and someone asked why I was volunteering to go to Iraq and I said the two greatest threats to America were far-left radicals at home and jihadists abroad.

Then I went to Iraq and I saw the difference between an opponent and an enemy. I had lived in deep blue places in Cambridge, Massachusetts, and in Ithaca, New York, with people on the far left of the political aisle, and I had a good life in both of those places. I could not have had a good life in Iraq under the control of the Islamic State. And I thought, “We are superheating our political rhetoric at home out of proportion to the stakes of our political controversies. And that’s dangerous.”

What do you see as the country’s greatest threats today?

Today, the greatest threat we have is polarization itself —this commitment we have to view fellow citizens as enemies and the incredible animosity existing across American communities that would lead people to feel so desperate about the state of the Union they would literally storm the Capitol to stop the democratic process.

This feeling of desperation is not limited to the few thousand that were there. The sense that Joe Biden would destroy America, that sense of existential crisis that is above and beyond any realistic policy stakes of any election, is a real danger to the body politic.

One thing we have to do is introduce a sense of proportion and perspective and dial back on the increasing hyperbole and hysterical and inflammatory language in American politics.

RNS recently ran a story about Southern Baptist pastors calling Kamala Harris a Jezebel. Is that inflammatory rhetoric being stoked in churches?

I think it’s stoked less by pastors but much more by conservative media. One of the misnomers about white evangelicals is that their churches are deeply political. That is by and large not true. The median evangelical pastor doesn’t talk a lot about politics from the pulpit. The politicization of evangelicals is occurring through conservative media and conservative religious activists. An awful lot of American Christians are not receiving a comprehensive theological instruction in political engagement. They are being catechized into religious political engagement through Fox, Mark Levin, Rush Limbaugh, OAN, Breitbart, viral Facebook videos. Yeah, there are pastors who stoke it, but that’s not who’s reaching the millions.

What about Christian nationalism? Is that also being driven by conservative media, or are churches contributing to it?

I think it’s both/and. It’s very rare to find an outright Christian nationalist church. There’s not a huge wave of Christian nationalist churches. I agree with Baylor historian Thomas Kidd, who says much of (Christian nationalism) is a sense of emotional attachment, rather than a theological construct. There’s a big church near where I live, and during the month of July the church is surrounded with American flags. But you get that pastor in a room and say, “Following Jesus is more important than serving America, right?” And he’ll say, “Of course, absolutely.”

Even Christians deeply enmeshed in Christian nationalism wouldn’t recognize the academic theology of it. But what they do have is a deep set of emotional convictions, and those convictions place the United States in a special, virtuous, godly position in world history. There will be a fierce defense of the history of the country. Any revisionism that says America’s history is more checkered than you might think will be met with a fear, a pushback.

I like the way C.S. Lewis characterized a more toxic version of nationalism; one that’s committed to a certain vision of history that may be at odds with the reality of the nation and a particular commitment to the superiority of the nation over other nations. There’s a version of patriotism that is quite healthy and can see the virtues of the country but also see its faults.

Do evangelicals need to be reminded of the prophetic tradition of denouncing the powerful for disobeying God?

Part of the negative partisanship of the time is that if you’re turning your gaze inward toward the church, you’re seen as giving aid and comfort to the enemy — you’re enabling, or empowering, the critics of the church. When all of this gets connected to partisan politics, to the tribe of red versus blue, it’s seen as a zero sum game — if you make any critique against red, you’re enhancing blue. It creates a sense of betrayal when there’s a serious or critical critique from within.

Do you fear Christian nationalism will become our civil religion?

The forms we’ve seen erupt in the last year are not our civil religion. It’s a dissenting faction from mainstream American life. When I think of civil religion, I think of a long bipartisan tradition of presidents who refer to Scripture in State of the Union addresses and in prayers at inaugurals. That’s a nod to the fact that America is a nation full of people of faith. It’s an acknowledgment of the spiritual reality of the country.

Christian nationalism is a subset of that. It is a more extreme version that says, “We’re not just a nation that’s composed of millions of believers, but a nation conceived by a particular religious idea that’s designed to be advanced by people with a particular kind of religious faith. Any departure from that threatens America’s greatness and maybe even America’s existence.”

How does America lower the temperature?

There are people who believe they are losing everywhere and the last wall, the last line of protection they see is the Oval Office or that hard-fought Supreme Court majority. The committed activist class is in a sense of existential angst. To the extent you can relieve that, it will rely on an appeal to faith in a powerful and personal way that starts to remind Christian believers of the toxic effects of fear and the reassuring reality of God’s sovereignty — that God preserves and protects his people, not the Republican Party, not Donald Trump, not the Democratic Party. God admonishes believers against fear and commands them to react to people who hate them with love and kindness. It will come not from a secular critique but from a religious reawakening that says, “We need to rediscover many of the basic biblical doctrines that have provided God’s peace in far more challenging circumstances throughout history.”

How does that happen in a time when many say religious leaders don’t have much influence over their flocks?

There is a human tendency to follow people who tell you what you already believe. At the same time, it’s just not true there isn’t leadership. There is absolutely leadership. Where leaders can step in and be very effective is to provide clarity. There are an awful lot of Christians who are younger. The evangelical church has grown much more diverse. There’s a lot of questioning, a lot of concern that Jesus isn’t being glorified in the way we see evangelicals in politics. When there’s discontent, there is an opportunity for leadership. There’s an opportunity for people to say, “There’s a better way.” When people have not been catechized into a particular theology of political engagement, there’s a real opportunity for teaching in the principles of the faith in this arena of life. Getting people who are firmly and angrily ensconced in their position, that will be hard. But there’s also a large number of people who know something is wrong and not quite sure they know what’s right.

READ: Some Southern Baptist pastors are calling Kamala Harris ‘Jezebel.’ What do they mean?