(RNS) — He was not a household name, but in the sometimes arcane world of biblical archaeology, Hershel Shanks was a star, and often a rabble-rouser.

Shanks, the founder and longtime editor of Biblical Archaeology Review, died Feb. 5 at the age of 90.

After spending a yearlong sabbatical in Israel in 1972, Shanks, who was Jewish, fell in love with archaeology. Having discovered archaeology late in life, however, he subsequently devoted all his considerable energy to making the field accessible to nonscholars.

In 1975, he founded the Biblical Archaeology Review as a way to bridge academic scholarship with the lay public’s appetite for answers to questions about key archaeological and historical events from the Bible: Was the Jews’ exodus from Egypt a historic event? Which parts of Jesus’ life as recounted in the Gospels are historical and which parts apocryphal?

His biggest contribution may have been a decades-long advocacy for public access to the Dead Sea Scrolls, considered among the 20th century’s greatest archaeological finds. The scrolls, which were unearthed in 1947, became the purview of a key group of experts who controlled access to them. But research into the scrolls held the promise of better understanding of Judaism in the decades before the birth of Jesus. Shanks, a journeyman journalist, understood this. In 1991, he announced the publication of 1,787 photographs of Dead Sea Scroll fragments never before seen outside of research libraries. He was sued for breach of copyright, a battle he lost.

He would go on to publish other archaeological scoops, often drawing the ire of professional archaeologists and academics who considered his tactics sensationalist.

Born in 1930 in Sharon, Pennsylvania, Shanks earned degrees from Haverford College, Columbia University and Harvard Law School. He then joined the U.S. Justice Department, where he handled cases in the United States Courts of Appeal and the Supreme Court. He practiced law privately in Washington for more than 25 years, writing widely in legal journals. He even argued an occasional case before the U.S. Supreme Court.

Then he made his trip to Israel. While there, he wrote a book, “The City of David: A Guide to Biblical Jerusalem.”

From 1987 to 2004, Shanks edited and published Moment, a magazine that bills itself a Jewish take on news, ideas and culture.

Moment editor-in-chief and CEO Nadine Epstein called Shanks “a towering presence, a true force of nature” and said, “His legacy of opening up the field of Biblical archeology was a testament to his sense of justice and transformed not just Biblical archeology but the trajectory of both the Jewish and Christian worlds. He will be greatly missed.” 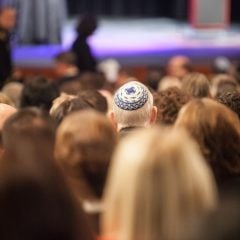 Arts & Culture
Anti-Semitism in US spikes after nearly a decade of decline
Follow us on Facebook!
Submit your photos to RNS