(RNS) — In the first piece of positive news on nuclear disarmament from the Biden administration, the United States and the Russian Federation have officially committed to extending the New START, the expiring 2011 nuclear arms agreement between the two nations, until 2026.

As Quakers, we have consistently called for the elimination of nuclear weapons and instruments of war. But this early diplomatic success for the Biden administration should be urgent for all people of faith and anyone who supports reducing and eliminating nuclear weapons. The New START is the only remaining agreement limiting Russia’s and the United States’ nuclear arsenals, which account for more than 90% of the world’s 13,500 nuclear warheads.

Without the New START, which would have ended this month, the U.S. would have lost valuable data about Russia’s nuclear weapons systems as well as the ability to conduct short-notice inspections of Russian bases. Each nation would have then faced unrelenting pressure to expand their nuclear arsenals, costing untold billions and driving unnecessary global risk.

Even with New START, we have a long road to achieve the total elimination of nuclear weapons. For arms control to succeed, it is imperative to stem the proliferation of weapons-grade nuclear material in countries that don’t currently have nuclear capability and to curb the production of new weapons by established nuclear powers.

This is why the administration’s next step should be to rejoin the Joint Comprehensive Plan of Action (JCPOA), the international nuclear arms agreement with Iran that was adopted in 2015. The previous administration shortsightedly renounced the agreement, replacing it with sanctions that have returned us to a standoff reminiscent of the Cold War. Diplomacy and negotiations are the only safe and effective way to reduce the threat posed by nuclear weapons. 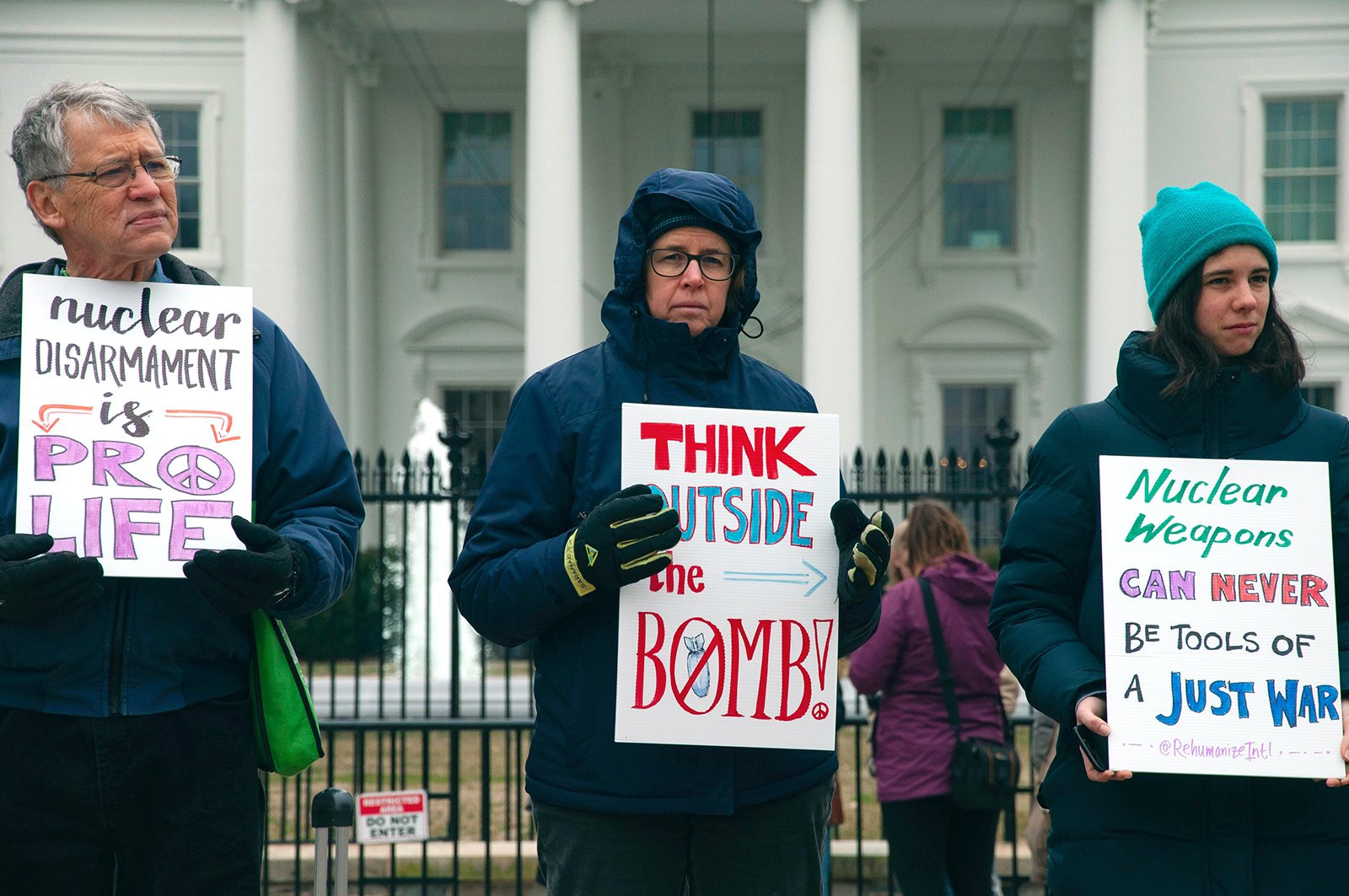 People demonstrate against nuclear weapons in front of the White House in Washington. Photo by Maria Oswalt/Unsplash/Creative Commons

Some may say we have bigger problems to deal with than nuclear weapons, such as the threat of climate change or the COVID-19 pandemic. But the lessons of the bombings of Nagasaki and Hiroshima showed the world the damage nuclear weapons can do — killing more people, destroying more land, destroying more cities, and the effects long-lasting — than other weapons of war, bar none.

But we can promote a course of nuclear disarmament and nonproliferation and still contend with other global imperatives that threaten humanity. On Jan. 22, the Treaty on the Prohibition of Nuclear Weapons, the first international treaty to comprehensively ban nuclear weapons, entered into force. The treaty, which has been signed by 86 countries but no nuclear powers, offers an aspiration for the complete elimination of these weapons.

Quakers worldwide support the TPNW, and we are no exception. U.S. accession to the treaty will not happen overnight — in fact we expect a long, hard slog — but we expect the United States to eventually sign. We will play a leading role in that process. I believe that just as assuredly as I believe that one day the world will be free of nuclear weapons.

Extending New START is a step in that direction — to have this negotiated agreement is essential. Quakers and other people of faith lobbied for its extension, and we celebrate this — even as we know we must do more.

But we need a truly new start — to think about the diplomacy that will recognize the need to shed these nuclear weapons of mass destruction altogether and create a world in which all people can live without the threat nuclear weapons pose to humanity.