(RNS) — Last year at this time, Beth Meyer Synagogue was thrown into a quandary.

The 475-family synagogue in Raleigh, North Carolina, had planned a Purim parade with face-painting and costumes and plenty of noisemakers called “groggers.”

But a strange new virus was spreading and public health officials were beginning to caution against large events..

“We had major public health experts in our synagogue who were already raising flags,” said Rabbi Eric Solomon. “But they didn’t say, ‘Don’t do it.’ It was unclear. There was a lot of confusion.”

The synagogue went ahead with the Purim celebration — and fortunately no one got sick.

Three days later, Orthodox Jewish rabbis in Bergen County, New Jersey, ordered the cancellation of all communal events; their synagogues were some of the first in the U.S. to ban indoor gatherings.

This year as they mark Purim, a one-day holiday that begins Thursday evening (Feb. 25) , American Jews are viewing the raucous, rollicking feast with a touch of grief.

“It’s a very painful yahrzeit,” Solomon said, referring to the Jewish tradition of commemorating the anniversary of the death of a loved one. The word comes from the Yiddish, meaning “year-time.”

Some 500,000 Americans have died of COVID-19. At Beth Meyer, many contracted the coronavirus. Some were hospitalized for days. Relatives of at least 10 synagogue members have died. 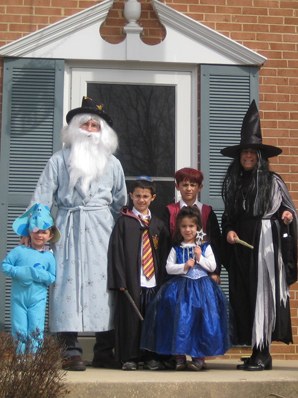 Purim recalls the biblical story of Esther and the Jewish people’s survival after the grand vizier of the Persian king plotted for their annihilation. To many, Purim is the Jewish Halloween, where kids dress up as Queen Esther or her guardian Mordecai, though really, anything goes — Marvel superheroes, T-Rex, politicians, famous celebrities are all game.

This year, Beth Meyer is planning a drive-through parade in the synagogue parking lot, an online play recounting the Book of Esther and a study session for adults.

Many synagogues are leaning in to the Purim tradition of giving gifts to friends and the poor— a custom known as “mishloach manot.” Synagogues and other Jewish organizations are baking hamantaschen, triangular filled pastries, for every member of the congregation and mailing them or delivering them in person.

Tikvat Israel Congregation in Rockville, Maryland, will continue its Purim puppet show tradition this year — except it will be on Zoom.

The Maryland synagogue went ahead with its puppet show in person last year — along with a carnival. It was Rabbi Marc Israel’s first Purim with the congregation, and the 250-member family synagogue was trying to attract new members.

But people were already nervous. Israel remembers congregants pulling out sanitizing gels and taking care not to shake hands.

No one fell sick after the Purim carnival, but over the course of 2020, the synagogue lost two members to COVID-19 — both older people living in communal care settings.

Israel noted that not only did Purim 2020 mark the end of in-person gatherings, the Shabbat after Purim marks a full cycle of online-only Torah readings. Many synagogues divide the Torah, or first five books of the Bible, into 54 weekly portions, which are read aloud Saturday mornings.

A complete cycle of Torah readings outside the synagogue is historic by any sense.

“I very much miss our people in person,” Zerwekh said. “It’s another holiday we’re not together.”

But like the story of Purim, he reasoned: “We’re resilient and strong and we’re going to make it though this. This is just some short-term pain in the meantime.”