(RNS) — Leaders of the General Baptist Council of Associations have recommended an investigation of a minister who preached that “weight control” by wives is the solution for marital problems.

Stewart-Allen Clark, pastor of the First General Baptist Church in Malden, Missouri, is seen in video clips of a Feb. 21 sermon questioning the appearance of women after they marry their husbands.

“Why is it so many times that women after they get married let themselves go?” he asks, standing on a stage with what appears to be a large open Bible in his left hand. “Why do they do that?”

Links to sermons from the church’s website are no longer available, but the Friendly Atheist blog featured a series of clips from the mid-February sermon.

RELATED: Some Southern Baptist pastors are calling Kamala Harris ‘Jezebel.’ What do they mean

The General Baptist officials stated in a Monday (March 1) Facebook post that Clark had been scheduled to be the moderator of the General Association of General Baptists meeting in July 2022.

“He has resigned from that position,” the post reads.

Clark’s church could not immediately be reached for comment. Its website’s contact form is “currently not available.”

The church later posted a one-sentence statement about its pastor’s status: “As of March 2, 2021, Pastor Stewart-Allen Clark has taken a leave of absence and is seeking professional counseling.”

At one point during his sermon, Clark makes a comparison to the former first lady, showing a picture of her in a long, sleeveless blue dress.

“Now look, I’m not saying every woman can be the epic, the epic trophy wife of all time like Melania Trump,” he said. “All I can say is not everybody looks like that, amen? … But you don’t need to look like a butch either.”

Clark, who noted he no longer does marriage counseling, cited a friend who had “a divorce weight on his wife. That’s how important this is.” He also referenced a joke about a boy’s discussion on why females wear makeup and perfume before saying, “You don’t want to be ugly and stink.”

He added another joke that prompted his laughter and others’: “Scientists have discovered, by the way, a food that diminishes a woman’s sex drive. It’s called wedding cake.”

General Baptist Ministries said in its Facebook post it has recommended its Council of Associations and a local presbytery “take appropriate action” about the statements in the sermon.

“The sermon included comments that are not consistent with the positions and values of General Baptists,” it said. “General Baptists believe that every woman was created in the image of God, and they should be valued for that reason. Furthermore, we believe that all individuals regardless of any other factors are so loved by God that Christ died for them.” 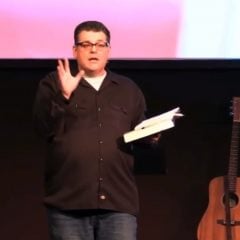 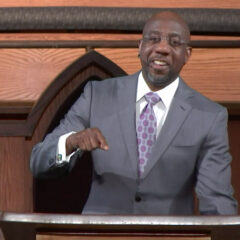 News
In Sunday sermon, Warnock, now senator and pastor, said he heard ‘echoes of the spirit’ in swearings-in
Follow us on Facebook!
Submit your photos to RNS