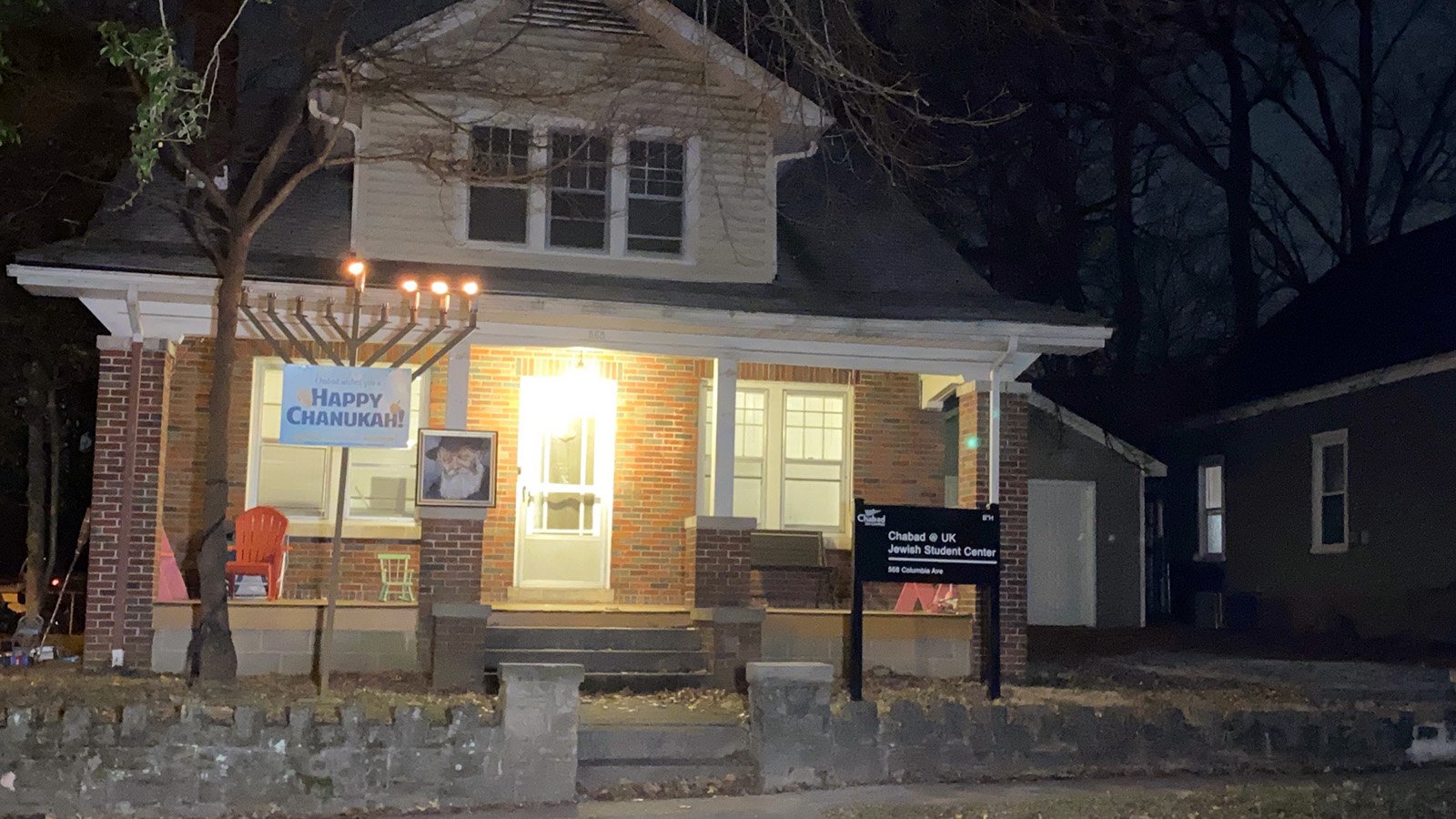 This photo was taken on Dec. 12, 2020, shortly after a man shouting anti-Semitic epithets attacked a participant in a menorah-lighting event outside the Jewish Student Center at the University of Kentucky at Lexington. Photo courtesy of Rabbi Shlomo Litvin

(RNS) — Rabbi Shlomo Litvin was hosting a menorah lighting outside the University of Kentucky’s Jewish Student Center on the third night of Hanukkah last year when a driver shouting anti-Semitic slurs pulled up, grabbed one of the participants, dragged him down the block and ran over his leg.

The attack was just the latest anti-Semitic incident that Litvin, who heads Chabad of the Bluegrass, a regional ministry of the Chabad-Lubavitch movement of Judaism, has seen in recent years.

Vandals have repeatedly struck the Chabad at UK Jewish Student Center on the Lexington campus, where he is the rabbi, and white supremacists have posted threatening notes in people’s mailboxes that included the 2017 Charlottesville marchers’ cry, “Jews will not replace us.”

But the December attack — still under investigation — propelled Litvin to help draft a resolution passed last week by the Kentucky Legislature and signed by the governor that condemns anti-Semitism.

The resolution condemns anti-Semitic acts and statements as “hateful expressions of intolerance that are contradictory to the values that define the people of the Commonwealth of Kentucky.” It also encourages all of Kentucky’s public officials to live up to the ideals of tolerance and religious freedom spelled out in the Declaration of Independence and the Constitution. 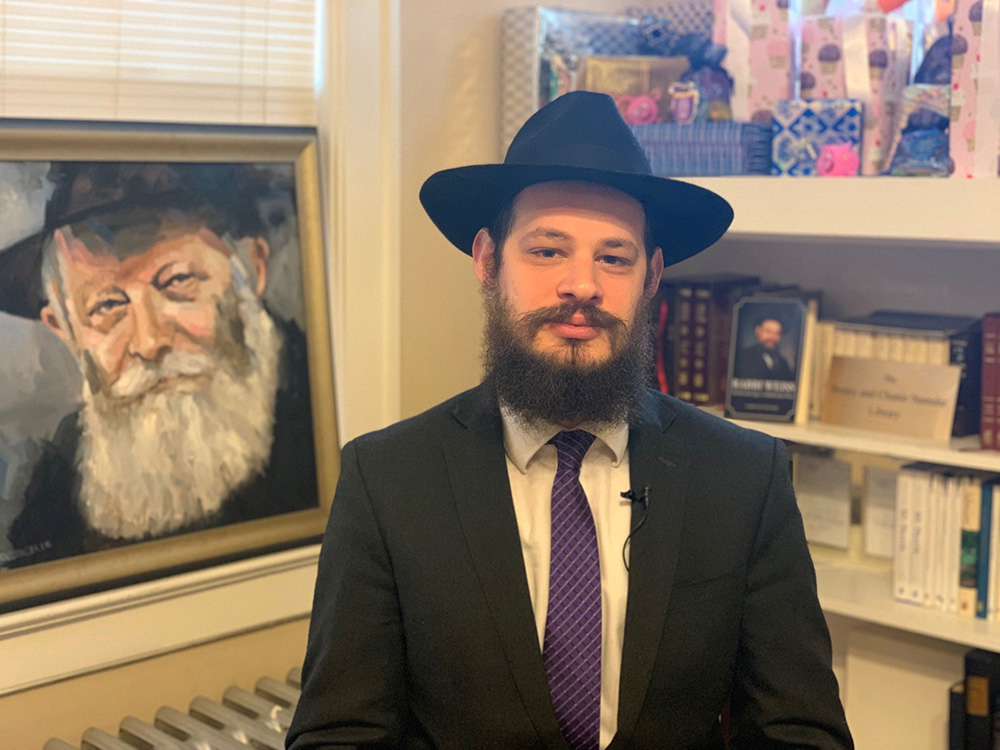 “I’m extremely proud of my commonwealth, but I can say, I’ve never been prouder that it passed unanimously,” said Litvin, a 31-year-old native of Kentucky.

Not everyone is as certain of Litvin’s victory. The resolution is based on a controversial definition of anti-Semitism that has divided the American Jewish community.

The International Holocaust Remembrance Alliance’s working definition of anti-Semitism was recently in the news after Jewish organizations, including the Conference of Presidents of Major American Jewish Organizations, the Jewish Federations of North America and the American Jewish Committee, called on the Biden administration to use the definition domestically, including to combat anti-Semitism on college campuses.

Every administration since George W. Bush has relied on the so-called IHRA definition in its approach to foreign policy. The Trump administration went even further, codifying the definition as part of a 2019 executive order that added anti-Semitism to the list of types of discrimination prohibited by federal law.

RELATED: Trump’s anti-Semitism order is much ado about not much

But some Jewish groups on the left insist the IHRA definition should not be used in a legally binding way. They say the definition can be deployed as a tool to silence or ban critics of Israel, and particularly of its policies in the Palestinian territories.

That is not a view shared by all Jews.

“It’s not good for Jews and for Israel if we’re perceived as silencing criticism,” said Rabbi Jill Jacobs, executive director of T’ruah: The Rabbinic Call for Human Rights. 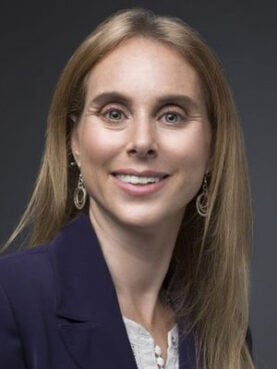 T’ruah is one of several Jewish groups calling themselves the Progressive Israel Network that opposes the legal codification of the anti-Semitism definition because it could undermine free speech by critics of Israeli policy.

“If you’re having a historical argument on whether Israel should have been created or if you’re arguing for a single Democratic state” comprising Israelis and Palestinians, “that’s not anti-Semitism,” said Jacobs. “It effectively silences criticism from the pro-Palestinian movement.”

The Reform movement, representing the largest of the U.S. Jewish denominations, took a more nuanced position, saying it endorsed the IHRA definition, but adding, “The definition should not be codified into policy that would trigger potentially problematic punitive action to circumscribe speech, efforts which have been particularly aimed at college students and human rights activists.”

The IHRA anti-Semitism definition began as an effort by a European commission to document attacks on Western European Jews after the Second Intifada, a Palestinian uprising against Israel that took place from 2000 to 2005.

Kenneth Stern, then an anti-Semitism expert for the American Jewish Committee, was asked to help draft the definition. The idea, Stern said, was to help European data collectors know when to spot anti-Semitism so it could be better monitored over time and across borders.

In 2016, the definition was adopted by the International Holocaust Remembrance Alliance, an intergovernmental organization based in Berlin. Since then, at least 28 countries, including the United States, have adopted it, according to the IHRA website.

But Stern freely admits the definition wasn’t intended to be enshrined in  law, as South Carolina has done, or as resolutions that guide state policy such as Kentucky’s. Similar efforts are afoot in other states.

The problem, said Dov Waxman, chair in Israel studies at UCLA, is that adopting the IHRA definition isn’t likely to slow the spread of anti-Semitism around the country, which has been surging.

In the Jan. 6 assault on the U.S. Capitol, a man wearing a black “Camp Auschwitz” T-shirt emblazoned with a skull and crossbones was just one of many rioters driven by anti-Semitism. A few weeks later, first-term Georgia Rep. Marjorie Taylor Greene claimed that the 2018 California wildfires were ignited by a space laser controlled by a corporate cabal, including the Rothschild banking firm, a Jewish banker.

A definition, Waxman said, is not likely to curb this kind of violence or anti-Jewish rhetoric. It may only be used to cancel pro-Palestinian events and chill the free speech of those who criticize Israel, especially on college campuses and classrooms.

“If it’s accepted that calling Israel a racist or apartheid state is anti-Semitic, then that might mean students, academics could be punished by the university for engaging in hate,” said Waxman. “The danger is certain political opinions could be defined as hate speech.”

Litvin, the University of Kentucky rabbi, isn’t worried the definition adopted by his state will be abused.

“The Jewish community has published a well-researched, logical and understandable explanation of what anti-Semitism is,” Litvin said. “It’s been recognized by the last three administrations. It’s recognized by half a dozen countries. To suggest that Jews don’t have a right to identify what hatred toward their people looks like is offensive itself.”