Meacham will join the cathedral in the new role this month, leading a discussion regarding the legacy of late Georgia congressman and civil rights icon John Lewis.

It’s one of several annual public conversations Meacham plans to lead, each focused on issues of faith, spirituality and civic life.

“Remembrance lies at the heart of our tradition, and I believe, deeply, that a contemplation of the past can shed light on the present and the future,” Meacham, an Episcopalian, told Religion News Service in an email.

Meacham, who will continue to serve in various roles at Vanderbilt University in Nashville, Tennessee, is the first leader appointed to the cathedral’s planned College of Faith & Culture. Cathedral officials said the initiative is designed to be a hub for programming around public engagement, culture and leadership.

Scholars have a special task in a time when division is a constant in American life, Meacham said. 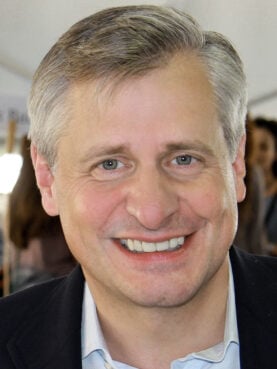 “In a climate of ferocious, often reflexive conflict, scholars — and really reflective folks in any walk of life — have a special opportunity, it seems to me, to encourage the country to look up from their phones and beyond their partisan boundaries to see how the United States has conducted itself, for good and for ill, during other inflection points,” he told RNS.

Meacham, known for his biographies of Presidents Andrew Jackson and George H.W. Bush, reportedly helped craft several speeches for Biden, including his campaign victory speech in November, which included both Scripture references and a recitation from the hymn “On Eagle’s Wings.”

It was one of several religious references Biden has slid into his addresses in recent months. While Meacham made clear that he is “not a partisan,” he framed the period surrounding Donald Trump’s presidency as a “threat to the democratic values and institutions” and noted he has been “honored to help President Biden” when asked.

Meacham himself spoke during the 2020 Democratic National Convention, where he mentioned the biblical “golden rule,” saying, “We’ve been taught to love our neighbors as ourselves.”

Asked about his relationship with the president, Meacham said, “we are friends, and we share a view of the country and of faith where the principles of the Declaration of Independence are paramount and must be protected, perpetuated, and extended.”

Despite the polarization of American politics, a pluralistic vision of the United States, Meacham argued, is as relevant today as it was when trumpeted by politicians and preachers of years past — including at the cathedral.

“History tells us that the advancement of that kind of argument requires both concrete action and a devotion to shaping what Lincoln thought of as ‘public sentiment’ — which means telling the story of the best of America while never overlooking or minimizing its worst,” he said.

“That’s an important way to seek, as Dr. King said from the cathedral pulpit a few days before his death, to bend the arc of the moral universe toward justice.”