(RNS) — Soon after Donald Trump took office, Maya Zinshtein, an Israeli filmmaker, noticed the growing prominence of evangelicals, not only in the president’s Cabinet and among his advisers, but also in Israel, where she was always told these believers were among Israel’s biggest donors and staunchest of allies.

As Zinshtein began to explore the phenomenon, she met up with many of these evangelicals, including members of a fundamentalist Baptist church from Kentucky that made annual pilgrimages to Israel and donated large sums of money to the Jewish state through the International Fellowship of Christians and Jews.

The IFCJ, Israel’s largest humanitarian relief organization, gets a big part in Zinshtein’s new documentary, “‘Til Kingdom Come,” which focuses on the complex alliance among evangelicals, Israel’s political establishment, its largest charity and the religious Jewish settlers in the West Bank.

READ: Bible teacher Beth Moore, splitting with Lifeway, says, ‘I am no longer a Southern Baptist’

The film, shown in Israel in the fall and now available for streaming in the U.S., shows how the evangelicals’ end-times theology, which sees Israel as playing a major role in Jesus’ final return, has caused them to adopt the settlers’ cause, and how the settlers have encouraged and nurtured the relationship.

Evangelicals see world events — from Israel’s creation in 1948 to Trump’s move of the U.S. Embassy from Tel Aviv to Jerusalem — as signs of God’s unfolding plan. As Trump’s informal adviser Johnnie Moore says in the film, “We are taught to translate geopolitical reality through the lens of prophecy.”

For some evangelicals, support for Israel, whether financial or moral or ideological, is a deeply felt religious obligation. For many in Binghamtown Baptist Church in Middlesboro, Kentucky, where part of Zinshtein’s film is shot, it is also a sacrificial one. The church, in the forested mountains of Appalachia, lies in coal-mining country, but that industry has dried up. The poverty rate in Bell County now tops 38%, with an average household income of less than $25,000. 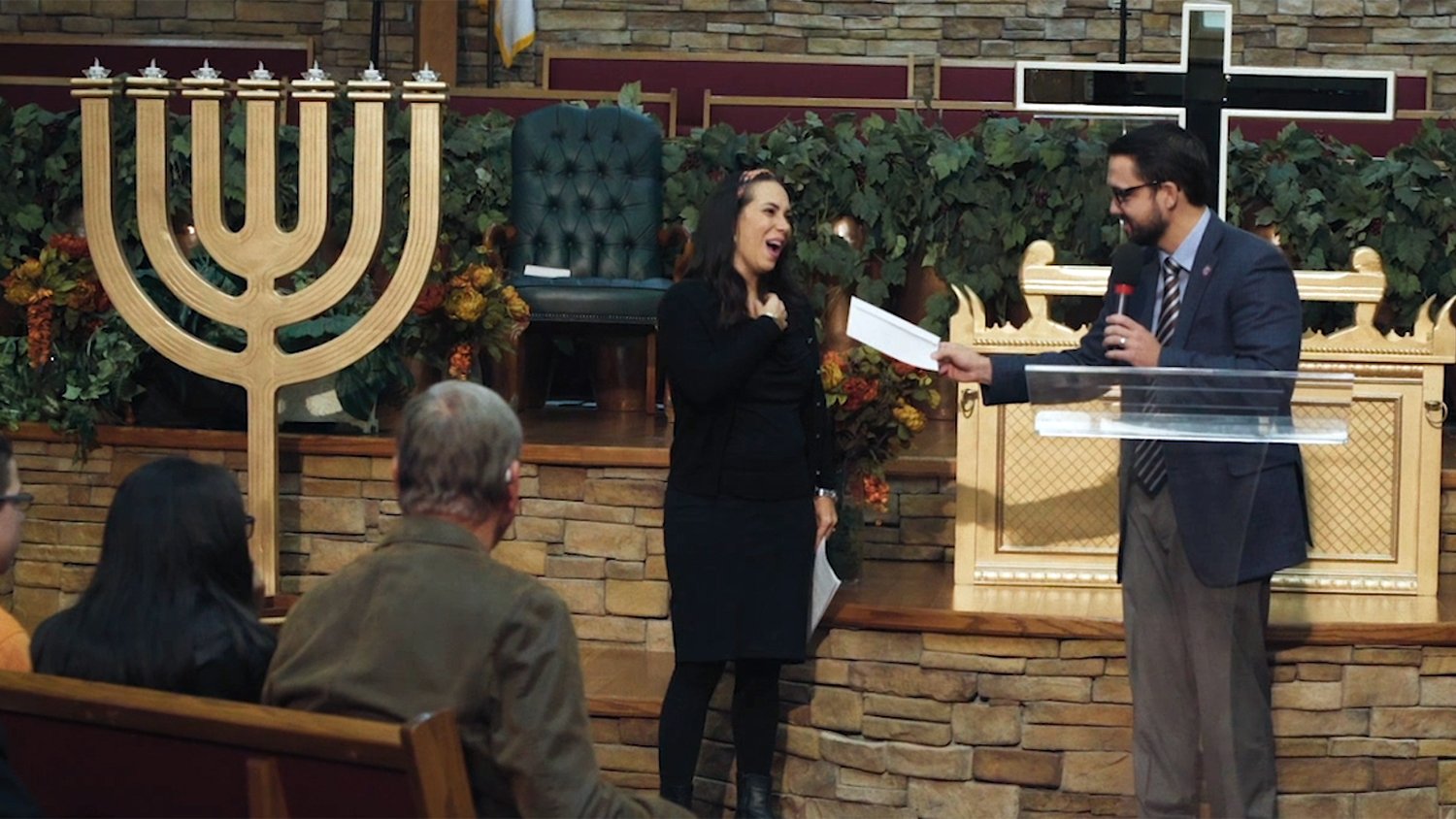 Still, Yael Eckstein, president and CEO of the International Fellowship of Christians and Jews, comes knocking. In the documentary, she is driven through a half-abandoned neighborhood but gratefully accepts a $25,000 check from the church to help various charity efforts in Israel.

“In the story they tell themselves, this is a key to salvation,” said Abie Troen, the film’s producer and director of photography, reflecting on the church’s generosity.

But there are other moral complications. The end-times theology subscribed to by evangelicals will culminate in the seven-year Tribulation and the Battle of Armageddon, during which two-thirds of Jews will be condemned to die for not accepting Jesus, with a remnant converting to Christianity.

That, Eckstein acknowledges, is the “elephant in the room,” but it is rarely broached.

Evangelicals also support an expansive Israel that refuses to acknowledge the existence of 2.5 million Palestinians in the Israeli-occupied West Bank or their aspirations to statehood — driving a wedge through any effort to resolve the conflict between Israelis and Palestinians.

“There’s no such thing as a Palestinian,” W. Boyd Bingham IV, the church’s associate pastor, says in the film, right after meeting a Palestinian Christian pastor who points out how damaging his beliefs have been to the Christian minority living in the occupied territories.

Religion News Service spoke to Zinshtein about her film and its reception. The following interview was edited for length and clarity.

The initial interest was about the involvement of Christian evangelicals. Most Israelis know nothing about Christian evangelicals. If anything, it’s “these Christians who love us.” It doesn’t go beyond that. I started looking into it in 2017. It was very clear the new American president was heavily backed by this community. My background is in journalism and I tried to find out where the wind was blowing. 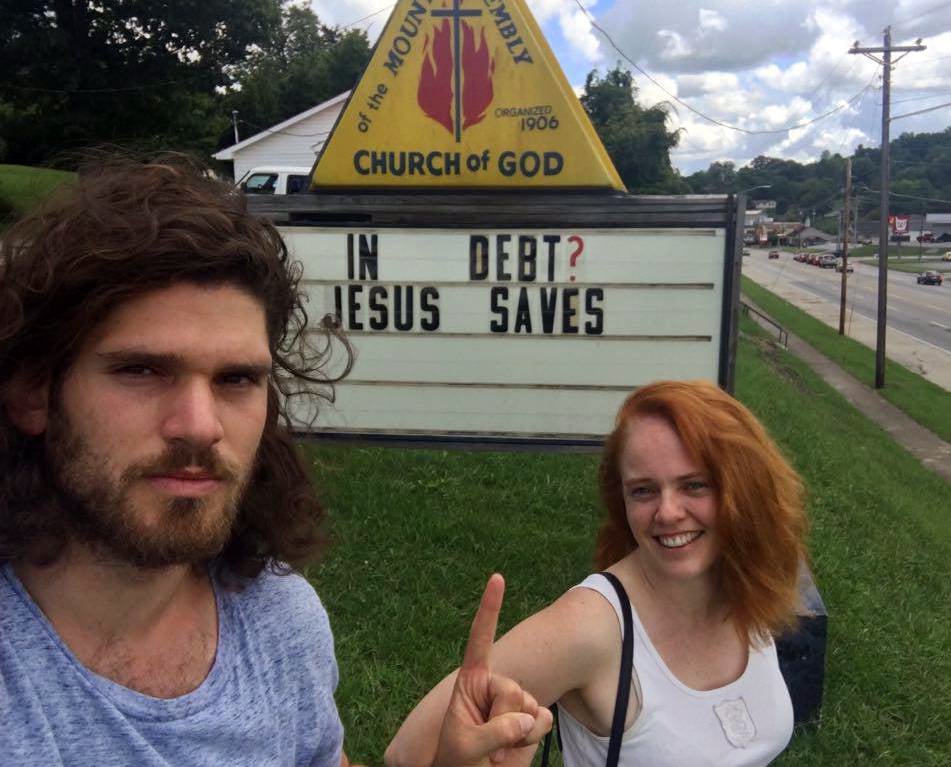 Producer and director of photography Abie Troen, left, and director Maya Zinshtein stand outside a Kentucky church. Their documentary, “’Til Kingdom Come,” is about the relationships between evangelical Christians and Israelis. Photo courtesy of Troen and Zinshtien

After I started looking into it, I understood that (evangelicals are) a huge power that acts beneath the surface and most Israelis aren’t aware of it. And a big documentary has never been made on the subject. I wanted to look at the bond between Christians and Jews. It’s not only them reaching out to us. There are allies here on the Jewish side willing to work with them. Rabbi Yechiel Eckstein (the late founder of the International Fellowship of Christians and Jews) was one of the pioneers of that. But today it goes all the way up to the prime minister, who says evangelicals are our best friends in the world.

One of the first filming days we had was at Mar-a-Lago, where the IFCJ had their annual gala. You could see the power and connections there. We started to understand all these ties.

How did you find the Kentucky church?

It was through the fellowship. We asked them, who are your major supporters? The fellowship receives money mostly from individual donations. This church donated as a community and that made them one of the biggest donors. The church was here on their annual trip to Israel. We asked to join them for one day and we stayed during their whole trip. Two months later we landed in Kentucky.

One of the things the movie shows is how incredibly poor this region of Kentucky is, and yet they raise so much money for Israel. Did that bother anyone?

It raised additional questions about the role of faith. In Middlesboro, Kentucky, you’re in the hands of God or in the hands of the devil. There’s no middle. The church plays a crucial role in the community. When you’re there on the ground, you see the kids the church helps. When I left, I felt like I wouldn’t want to take one penny from these kids. 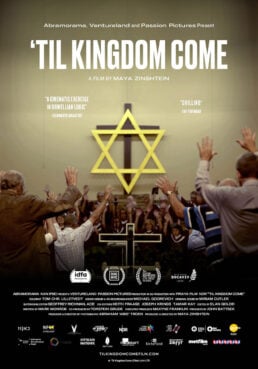 To what extent does the money raised by the IFJC and other nonprofits contribute to the expansion of settlements in the West Bank?

Most of the money comes from the state of Israel. The Christian money in the settlements is the cherry on top. The much greater support (Israel) receives is the political support — all the things that happened over the past four years by President Trump. The fact that (former Secretary of State) Mike Pompeo visited Israel and went to the settlements and said, “The settlements are not illegal per se” — that changed the whole policy of the United States toward the settlement project. That’s much bigger than any money evangelicals spend here. That’s huge. That legitimized them on the international arena.

One of the more moving parts of the film is when Boyd Bingham, the young evangelical pastor from Kentucky, visits a Palestinian Christian pastor in the West Bank who tries to tell him about the plight of the Palestinians. Did you arrange that meeting? How did that come about?

The church was on another trip to Israel. They were visiting Bethlehem and I asked (Bingham) to go (meet him). The reality is that the church travels in a bubble, without meeting actual Israelis and Palestinians. I was curious about a face-to-face meeting. I like Boyd (Bingham) a lot. It was interesting for me to see what would happen there.

What do you hope to convey about the movie and what kind of reception has it received?

In Israel, it was exactly what we hoped. It was broadcast on public TV here and received wide press coverage. The response of most people was, “Oh my God, we had no clue about it.” I think this bond shouldn’t happen behind the scenes. I wanted to bring this operation to light and to have a healthy conversation about it.