(RNS) — Chris Estus doesn’t seem like the typical thru-hiker on the Appalachian Trail.

Estus is 60 years old, has been married for 35 years and runs his own business in San Antonio, Texas, where he also leads a ministry for those recovering from addictions, called the Pioneer Group, and is director of recovery ministries at Alamo Heights United Methodist Church. He only began his “outdoors career” 10 years ago, he said.

But after he finished hiking the 500-mile Colorado Trail last year, his own recovery sponsor suggested he take on the Appalachian Trail next and “share the good news” of Jesus along the way, he said.

When Estus learned the United Methodist Church was searching for a chaplain to do just that, he took it as a sign.

He said, “Well, I guess I have my marching orders.”

The denomination announced Estus, whose trail name is “Bone Spur,” as its ninth Appalachian Trail chaplain this week.

It grew out of the Appalachian Trail Outreach Ministry started about two decades ago by a trio of churches pastored by the Rev. Alan Ashworth in Tennessee and Georgia. The ministry places coolers of drinks, weather reports and copies of the New Testament along the trail and serves a hot breakfast to hikers, according to the North Georgia Conference of the United Methodist Church.

Then, Hall said, ministry leaders raised the question: “What would it look like to have somebody out amongst them?” 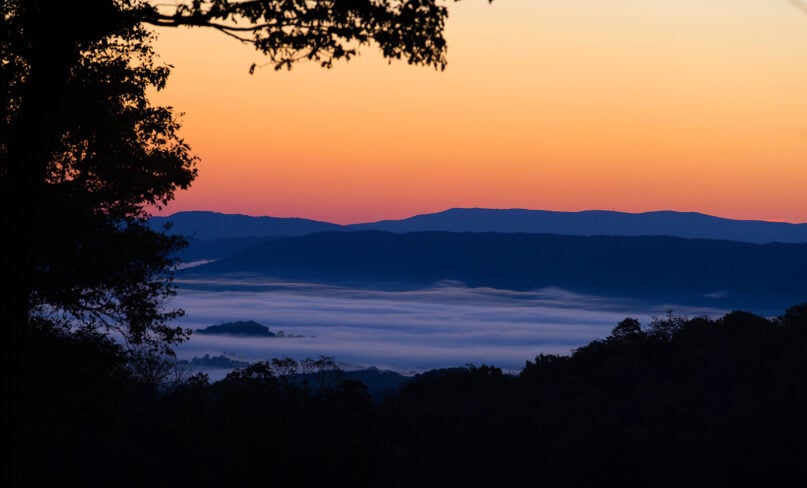 The sun rises over the fog-shrouded Shenandoah Valley just off the Appalachian Trail near Pearisburg, Va. Photo by Mike DuBose/UMNS

Hall filled the one-year chaplaincy in 2018, what he called a “ministry of immersion” along the trail. Sometimes that looked like getting to campsites early to have water waiting for other hikers. Sometimes it was simply listening to the people he walked alongside.

“My day-to-day ministry was walking with people and talking with people, hearing their stories, hearing what brought them to this place, and then that would allow a conversation to start about life out in the trail,” he said.

Mostly, the chairman said, ministry on the trail involves serving the hiking community, bridging the gap between the community and the church and inspiring others to find innovative ways to serve those around them.

But, he added, “We’re definitely not a ministry that has anything set in stone. I fully believe that every chaplain brings their own special gifts, so it looks a little different with each one of them.” 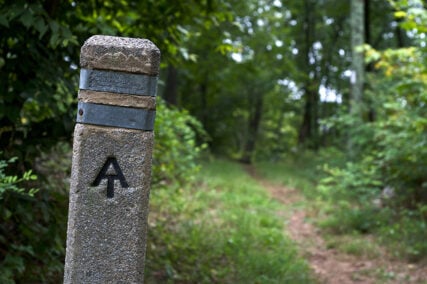 A trail marker along the Appalachian Trail. Photo by Chiot’s Run/Creative Commons

The new chaplain discovered a love for hiking and experiencing the outdoors while on a study tour of Israel about a decade ago, he said. He was sitting on a rock overlooking the Sea of Galilee when he burst into tears. He realized, he said, “I was designed for this. Who knew?”

“It seemed like a whole new world of spirituality opened up for me right there sitting on that rock, where I was learning to understand the Bible in a completely new way. It was now in color rather than black and white, for one thing. … And I’m physically engaged as well,” he said.

“So my head, my heart and my physicality were all working together at the same time.”

Estus plans to start a “flip flop” thru-hike — or a hike all the way through the Appalachian Trail — from Harpers Ferry, West Virginia, in late May after he becomes a licensed local pastor with the United Methodist Church. After reaching Katahdin in Maine, he’ll return to Harpers Ferry to complete the second leg of the trail, completing the 2,190-mile trek this fall.

He envisions his ministry as a “loving, listening non-reactive presence” to hikers and plans to post daily video blogs and reflections for others following along on the Appalachian Trail Chaplaincy’s social media channels.

The trail is open for day use during the COVID-19 pandemic, with some restrictions varying by state.

The Appalachian Trail Conservancy has advised long-distance hikers to postpone their hikes. However, it also has shared guidance and recommendations on its website to minimize risk, noting that “it is evident that hikers will be embarking on journeys on the Trail, and planning and preparation will be key to their safe and successful journeys on the A.T.”