VATICAN CITY (RNS) — After the Vatican emphatically banned blessings on same-sex couples’ relationships Monday (March 15), Catholic groups, priests and laypeople around the world are emphasizing the need for the Catholic Church to take real steps in including and promoting LGBTQ individuals.

In Germany, Catholic bishops and laity have been debating the possibility of blessing same-sex couples for almost six years, according to Birgit Mock, vice president of the Association of German Catholic Women and co-chair of the forum on sexuality and partnership of the German Synodal Path.

Lay and clergy members of her group, which is part of a larger discussion of German Catholics on the challenges faced by the local church, were “perplexed” by the Vatican note, she said.

“What really strikes me is that the Vatican gave us the sense that they are closed on the process. They led us to believe that the questions on God’s will and God’s plan are already answered,” Mock told Religion News Service Friday (March 19).

“But not for us in Germany. In our opinion the question is still open. We are therefore still in the process. We want to find God’s will and we want to find it in the lives of these couples,” she added.

Many in the church suspect that the Vatican’s note, issued by the Congregation for the Doctrine of the Faith, was prompted by the resumption of the Synodal Path discussions, which had been interrupted during the pandemic. 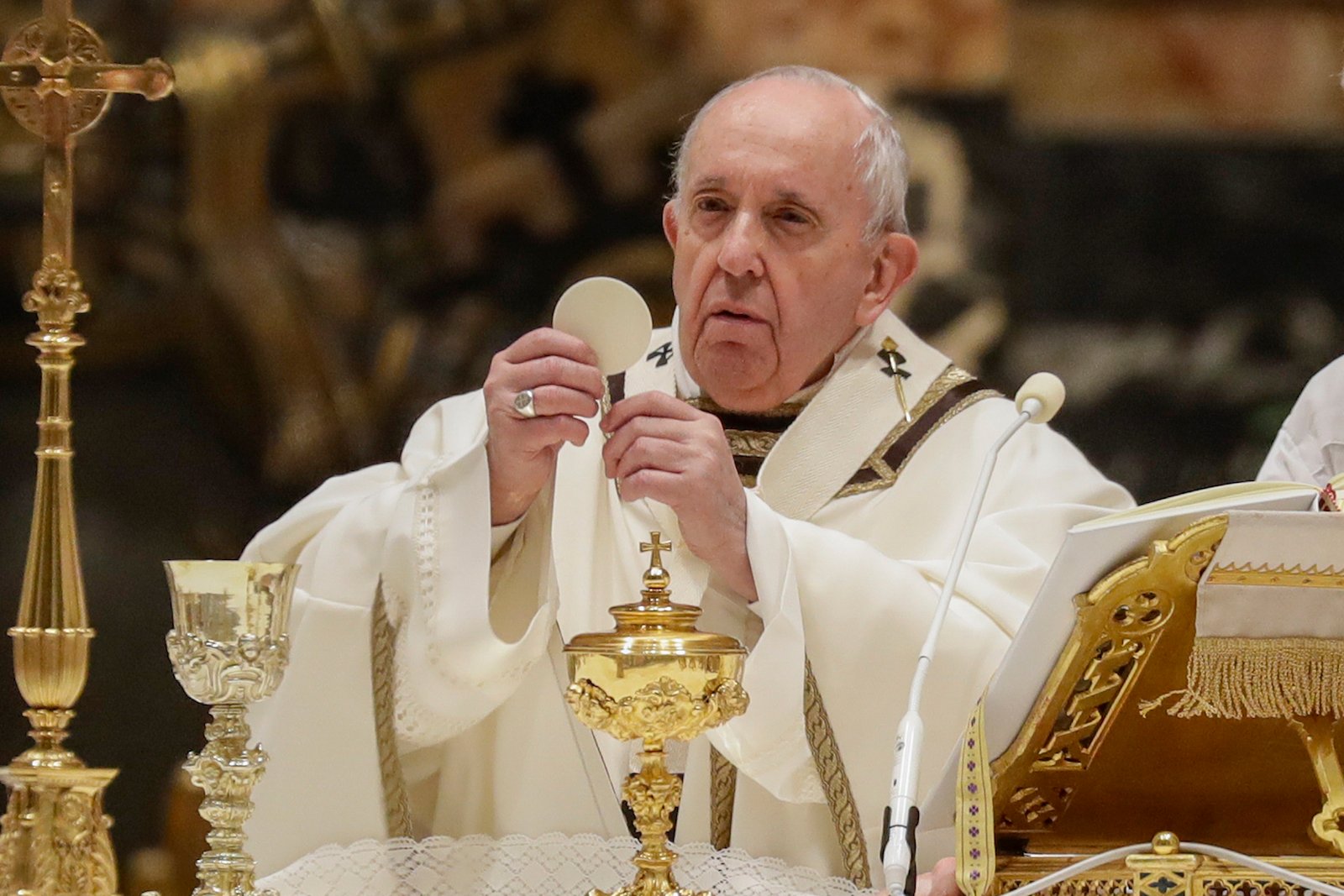 Pope Francis celebrates a Mass with members of religious institutions on the occasion of the celebration of the World Day of Consecrated Life, in St. Peter’s Basilica at the Vatican, Feb. 2, 2021. The Vatican decreed on March 15, 2021, that the Catholic Church cannot bless same-sex unions since God “cannot bless sin.” The Vatican’s orthodoxy office, the Congregation for the Doctrine of the Faith, issued a formal response to a question about whether Catholic clergy can bless gay unions. (AP Photo/Andrew Medichini, pool)

The Vatican’s note, which said that blessings for such couples are prohibited and that God “cannot bless sin,” specified twice that Francis approved its message, surprising those who thought that the Argentine pontiff had ushered in a new openness, if not support, for LGBTQ individuals. Catholic teaching views homosexuality as “intrinsically disordered,” even though the latest Vatican document avoids the use of that language.

According to a 2015 Pew Research Center Study, 76% of Catholics in the U.S. believe the church should allow the use of birth control, 62% believe that divorced and remarried Catholics should have access to the Eucharist and 46% recognize same-sex marriages.

Mock said, “Of course, we will discuss the note from Rome here and we will consider it, but we are committed to the question of how we can be a church that is near to the people and fulfilling the plan of god to be with people who are in love.”

The Synodal Path is composed of German Catholic clergy and lay representatives, coming together to address topics, from female ordination to financial management, that may be driving a massive disaffiliation with the church.

Many dioceses in Germany, Mock said, already perform blessings for same-sex couples. A Synodal Path forum on sexual morality, led by Bishop Helmut Dieser of the Diocese of Aachen, has invited LGBTQ Catholics to take part in the discussions openly. The group also caters to the needs of divorced and remarried Catholics who don’t have official sanction to receive the sacraments of marriage or Communion.

Many same-sex couples asking for priestly blessings live in loving and caring relationships, Mock said, and “there are so many good things that in the end we see that the blessing of God is already in the partnership.”

Among the group’s proposals is a course of discussions and lectures to prepare same-sex couples to receive the blessing, “a symbol,” Mock said, that could encourage many same-sex couples in the Catholic Church.

Mock said she is “hopeful that in the end we will find the path and process for a church that is really near to the people.” They will focus on the words the pope has spoken in the past, she added, particularly his 2016 apostolic exhortation on family and relationships, Amoris Laetitia.

The doctrinal correctness of the statement aside, some Catholic leaders have reacted to both the emphasis and the timing of the statement. “If their genuine concern is to teach, they blew it,” said the Rev. Bruce Morrill, a Jesuit and a professor of Roman Catholic studies at Vanderbilt Divinity School in Tennessee, noting that doctrine “means teaching.”

According to Morrill, the CDF “made a big mistake in that sentence about ‘God doesn’t bless sin,’” calling the sentence “symptomatic of the problem of Catholic moral teaching and its understanding by the clergy and laity, which collapses everything into the category of sin and pushes aside the real pastoral and personal levels of moral teaching and practice.”

Quashing investigations like Germany’s Synodal Path, he said, showed that the decentralization of the church, imagined in the Second Vatican Council of the mid-1960s, has instead resulted in a top-down approach that “treats the rest of the world, and especially bishops, as branch managers of a central modern corporation.”

Francis’ more pastoral, one-on-one approach to Catholic doctrine and moral teaching, Morrill said, has encouraged the church to adapt to the lives of Catholics today, many of whom ignore teachings about divorce, birth control and sexuality. “Welcome to the real world,” he said. “New issues come up, humanity changes, social, personal, traditional characteristics of being human continue to evolve.”