(RNS) — Spike Lee’s film “Do the Right Thing,” released in 1989, chronicled a long, hot summer of Black/white racial tensions in a Brooklyn neighborhood. The climactic scene depicts a riot that breaks out in the aftermath of a Black man (Radio Raheem) being choked to death by the police. The riot begins at the white-owned Sal’s Pizza Parlor. After the crowd sets a fire there, it turns to the Korean grocery store next door.

As the crowd of people approaches the owner, you hear him shouting over and over with his wife and kid in the background, “I’m no white! I’m no white! I’m Black, I’m Black!” To which the crowd responds, “We Black!” The Korean owner, pleading now, says, “You, me same!” The scene closes with an older Black man telling the shop owner to open his eyes.

That line, “You, me same!” returned to me as I heard news of the murders of six Asian women and two others during the attack on three spas in Atlanta. We are waiting for more details to be made known about the killer’s motivations and whether the murders were a hate crime. I claim no special insight in that regard, but people of Asian descent have every right to fear the worst.

For many African Americans, this summer was the season of protest for Black lives. Ahmaud Arbery, George Floyd and Breonna Taylor were persons robbed of the most precious of gifts, life itself. These injustices and the protests they sparked stirred a nation.

But alongside the ever-present reality of anti-Black racism, another sickness that stalks this republic returned. Due in part to the racist rhetoric surrounding the COVID-19 virus, anti-Asian racism surged during the pandemic. Let us speak plainly here: This rhetoric was embraced by the previous administration, and its use spread to others in his party despite warnings about the dangers it posed to those of Asian descent.

Now, Asian communities and those who love them are waiting to hear the confirmation of their worst fears. They are waiting to see if what they know to be true is actually true. Words and the atmosphere created by those in positions of power matter. Hate flows downstream.

If the playbook remains the same, there will be attempts to isolate this event. Some will try to separate these deaths from the history of anti-Asian sentiment in the country. We will be told words do not kill people, guns do. We will hear claims that the only people responsible for the rise in anti-Asian racism are the individuals who committed those crimes. But either culture matters, or it does not. One cannot warn of the dangers of a decaying moral fabric and not see the danger in the scapegoating of Asians.

Some have latched on to the claim by the perpetrator that the cause of this spree was in fact “sexual addiction,” and for that reason no racist motive should be assumed. There are a number of problems with this. 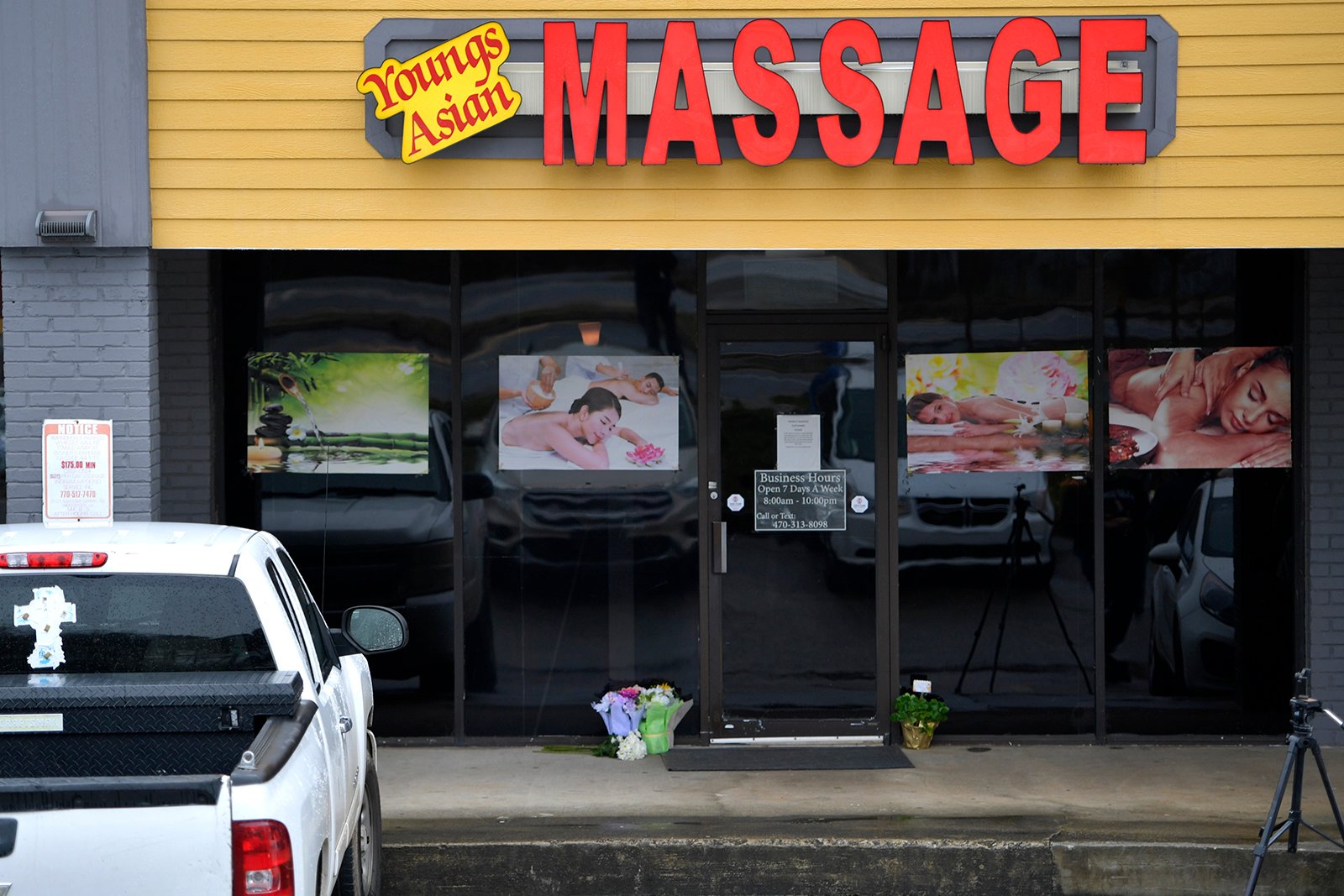 A makeshift memorial is seen outside a business where a multiple fatal shooting occurred on Tuesday, March 16, 2021, in Acworth, Ga. Robert Aaron Long, a white man, is accused of killing several people, most of whom were of Asian descent, at massage parlors in the Atlanta area. (AP Photo/Mike Stewart)

First, it ignores the racist tropes that have often attached themselves to Asian women, especially regarding sexuality. Second, it neglects the basic Christian idea of the possibility of self deception. The Christian believes we can be guilty of all kinds of sins of which we are consciously unaware. The possibility, then, that a murderer might not be fully aware of the varying distorted impulses driving certain actions is almost certain. Finally, we have the basic fact that it is common for racists (including segregationists during Jim Crow) to behave in racist ways while denying they are racist. Racism does not arise merely from internal awareness. Sometimes the racism is in the act itself.

The burden of proof here is not in proving this act was racially motivated. In the context of present and historic anti-Asian sentiment and sexualized tropes related to Asian women, the burden of proof involves proving why this particular act was not racialized. Let’s not re-traumatize a community by forcing them to defend a very reasonable inference.

If Faulkner was right that the past is never dead, it is not even past, then we can’t simply close the book on anti-Asian racism. We must own our past, deal with our present and from the rubble build something better.

As a child, I learned well the history of Jim Crow laws and informal customs that marred and deformed Black life in the South. I knew well the long-term strategy for the deconstruction of segregation laws that climaxed with Brown vs. the Board of Education and later the Civil Rights Act of 1965.

I am sure I was taught about the Chinese Exclusion Act of 1882 and the variety of anti-Asian immigrant laws that grew alongside Jim Crow laws from 1900 to the 1940s. But these realities seemed far from the Black/white binary of Alabama in the 1990s.

But anti-Black racism and anti-Asian racism are different fruits of the same poisonous tree of white supremacy. Both are rooted in a hierarchy of persons based on the color of their skin.

This hierarchy was designed to keep one group in power at the expense of everyone else.

From a Christian perspective, both forms of racism are rooted in a false understanding of what a person is and who determines their value. Christianity remains the largest religious group in African American and Asian American contexts. For many Blacks and Asians, our faith has been a place of refuge and affirmation when the wider culture treated us with suspicion. We have been reminded time and again that God values us as those made in his image.

But we know these things. What can we do? If Black people knew the answer to that question, Ahmaud Arbery might still be alive. There are no easy solutions. There are no books we can buy to solve the problem quickly. It took a long time to build this broken culture; it will take a long time to tear it down and dig out the roots.

When death stalks the Black community, I do not need someone to solve the problem for me. I need someone to fight the problem with me. I do not want to weep or pray alone. So, to the Asian community, the best we can offer is to see and hear you. We can commit to mourning with you. We will march beside you and do what is in our power to support laws that protect you from discrimination and punish those who target you. We are your allies. We are your neighbors. 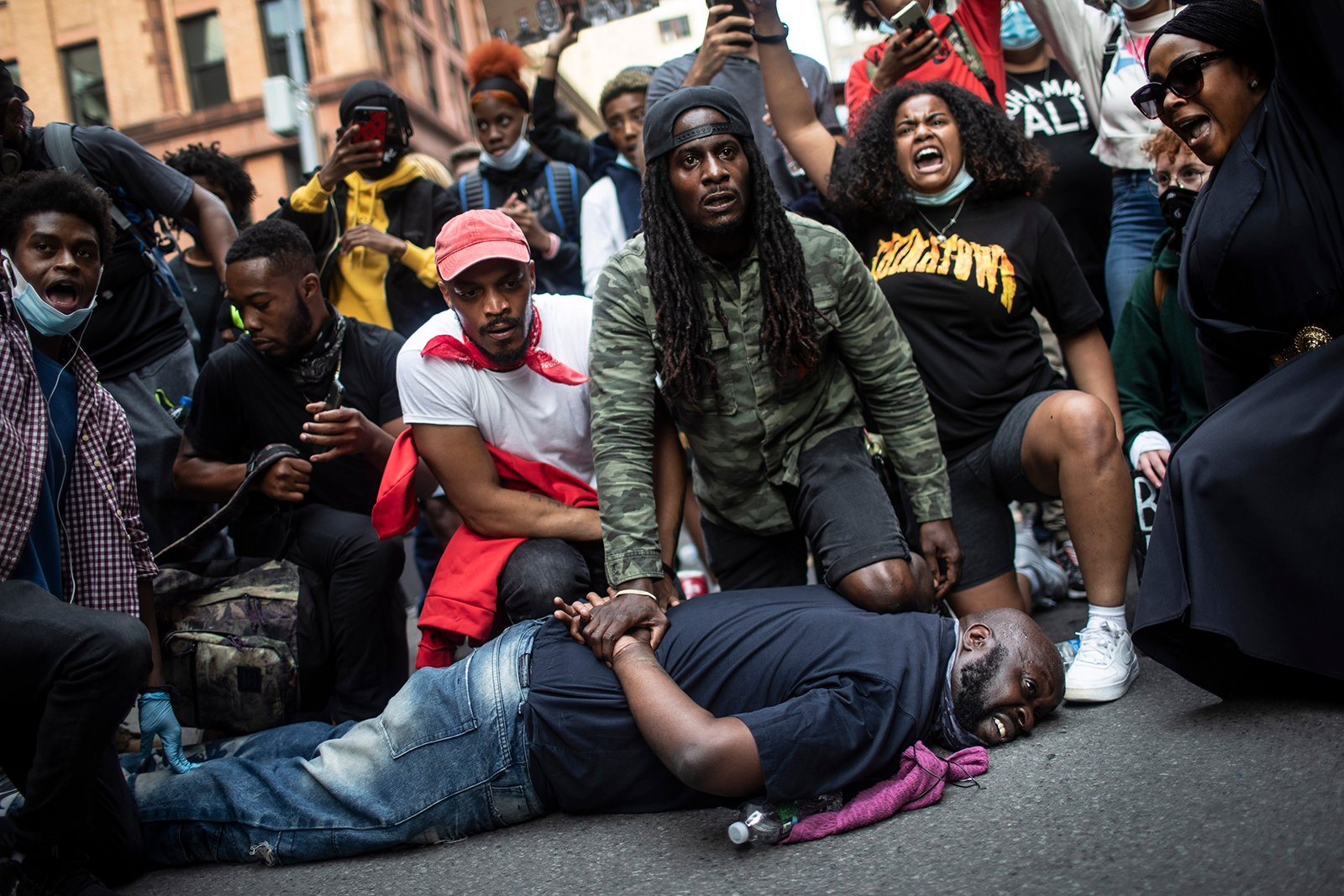 Protesters reenact the scene where George Floyd was restrained by police while marching in a solidarity rally June 2, 2020, in New York calling for justice over his death. Floyd died after being restrained by Minneapolis police officers on May 25. (AP Photo/Wong Maye-E)

A few weeks ago, a Filipino professor in my department sent me the story of Angelo Quinto, a Filipino man who died after a police officer knelt on his neck for five minutes during a mental health episode. He spoke about the pain his community was experiencing as a result of that and the clear parallels to the grief of the Black community in the wake of George Floyd. I failed him in that moment. I didn’t write a story. I made the excuse in my head that I had just sent in an article and someone better qualified than I could address the issue. I was wrong. I could have done more.

The Korean store owner was also wrong. He was not Black. Blacks and Asians are not identical.

Both Black women and Asian women must deal with sexualized and racist tropes, but those tropes are not the same.

Asian Americans, not African Americans, are saddled with “the model minority” myth that hides the complex and divergent economic outcomes of different ethnic groups that fall under the category Asian. Nonetheless, that model minority myth is often weaponed against Black people. Our fates are intertwined. I am not treated like a perpetual foreigner nor locked into permanent middle management. But I am likely to lose out on job opportunities if I am too recognizably Black.

Our particular problems and struggles are different. Both communities fight in different ways for dignity, respect and the freedom to flourish, despite the strictures society wants to place on us.

To be a good friend to my Asian brothers and sisters involves celebrating the gifts the varied Asian cultures offer to this country that make us more, not less. Being a co-belligerent in the struggle for justice does not mean collapsing all Asian problems into Black ones or ignoring the tensions that exist between Black and Asian communities; it is to try to understand the unique stories of Asian Americans and support them in the best ways we know how.

This is rooted in the idea that God did not create a limited supply of justice such that I need to hoard it only for the benefit of my community. God’s justice exists in abundance and is available for all.

We can stand in solidarity. Asian lives matter.

(Esau McCaulley is the author of “Reading While Black” and an assistant professor of New Testament at Wheaton College. The views expressed in this commentary do not necessarily reflect those of Religion News Service.)