(RNS) — Americans are becoming more confident they can attend in-person religious services but church attendance at Easter services will still be far lower than usual this year, a new Pew Research poll finds.

The poll, conducted in early March among 12,055 Americans, finds the percentage of regular attenders who say they actually have attended religious services — in person — in the past month is slightly higher than it was in June, about 17%.

Among Christians, only 39% said they planned to go in person to church services this Easter Sunday (April 4), with white evangelicals the most likely to say they planned to — 52%. That’s far lower than the 62% of Christians of all kinds who typically attend services at Easter, the holiest day of the Christian year. 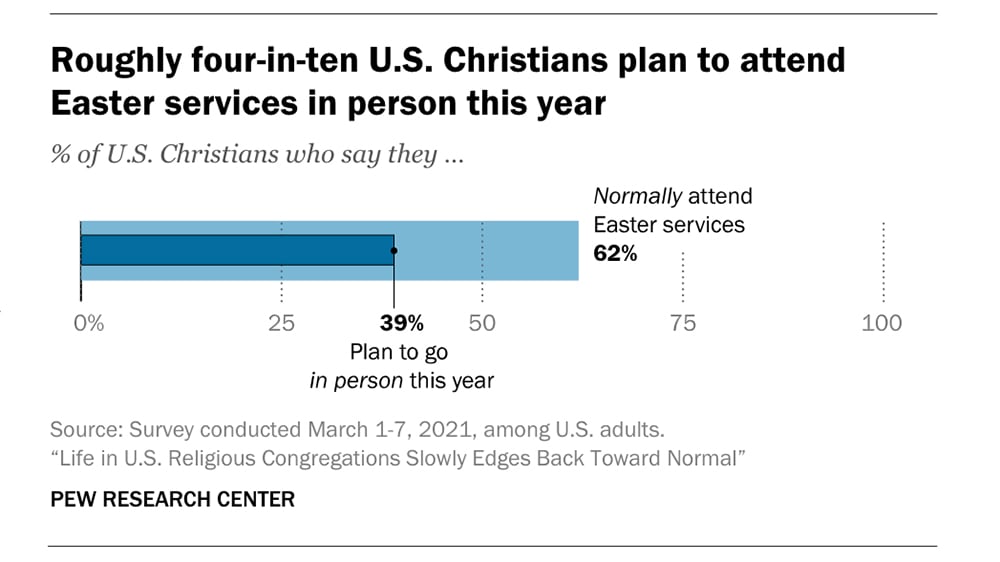 The poll also found that people who attend religious services favor keeping a lot of the COVID-19 restrictions, such as social distancing and mask-wearing, in place.

Catholics, more than any other group, say their churches are open but operating with virus-related precautions in place: 79% are open but require social distancing, masking and attendance limits.

Overall, half of Christians say their congregations are open to in-person services while enforcing social distancing and mask-wearing.

The return to pre-pandemic levels of in-person religious attendance is much slower among Black Protestants. Only 21% said they are attending in-person services now and only 31% plan to attend at Easter — far lower than the 68% who typically attend. The pandemic has hit Black Americans especially hard, and that may be one reason.

About 80% of all religious attenders said their place of worship offers online services.