(RNS) — The vast majority of African Americans who are religiously unaffiliated say they believe in God or some other kind of higher power, the Pew Research Center reports.

About half of Black “nones” say they pray at least monthly, but far fewer attend religious services.

The findings, released March 17, are part of continuing analysis of Pew’s “Faith Among Black Americans” survey conducted from late 2019 through mid-2020.

Researchers found that 9 in 10 Black nones — people who describe themselves religiously as “nothing in particular,” agnostic or atheist — believe in God or another higher power. This is higher than among the general population; 7 in 10 American nones overall believe in God or a higher power, including 86% of adults who say they have a “nothing in particular” religion and 46% of agnostics and atheists.

“The widespread belief in God among Black ‘nones’ is driven primarily by those who say their religion is nothing in particular, rather than those who identify as atheist or agnostic,” wrote Kiana Cox, a research associate.

“Among those who say their religion is nothing in particular, 94% believe in God or some other higher power.”

There are fewer nones among the Black population than the general population. The percentage of nones in America has reached 27% overall, whereas just about about one-fifth — 21% — of Black adults in the U.S. qualify as nones. Eighteen percent say their religion is “nothing in particular,” while 2% say they are agnostic and 1% say they are atheist. 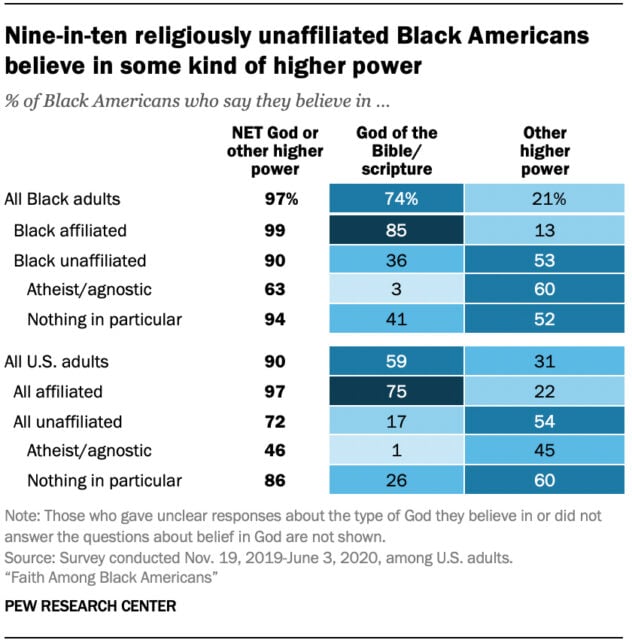 The Pew analysis found some variations in the way Black nones express their beliefs or are involved in spiritual practices compared with their more religiously active counterparts.

For example, a bit more than a third of Black nones — 36% — believe in the God of the Bible or other scripture while 85% of religiously affiliated Black Americans hold such beliefs.

Among Black nones themselves, there also are divergent beliefs. Of those who have a “nothing in particular” religion, 41% believe in the God of the Bible but more — 52% — believe in some other kind of a spiritual force or higher power.

While 81% of Black nones never or seldom attend religious services, they are still more than likely to pray. Sixty percent of Black people who describe themselves as “nothing in particular” say they pray at least once a month, while 17% of Black atheists and agnostics say the same.

Three in 10 Black atheists and agnostics say they meditate at least once a month, compared with 4 in 10 Black people who are “nothing in particular.”

The Pew study included a focus group exclusively composed of Black American nones, many of whom spoke of spiritual practices that did not necessitate attendance at a house of worship. 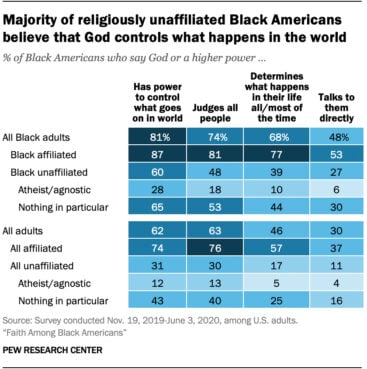 “We don’t always have to run to a place because I always believe that you are a temple,” one woman said. “Your body is a temple.”

A man in the focus group added: “I just feel like I have a relationship with God. … I don’t need to wear an article of clothing or sit in a quiet place, because my world isn’t quiet.”

The Pew study on Black Americans’ faith, which was first released in February, had an overall margin of error of plus or minus 1.5 percentage points for its sample of 8,660 Black adults.