VATICAN CITY (RNS) — Pope Francis’ apostolic visit to Iraq in early March was received as a symbol of hope by the neighboring population in Syria, which just entered its 10th year of war exacerbated by the COVID-19 pandemic, according to Catholic envoys and charity workers.

“Pope Francis’ trip to Iraq was of great hope for Syrians,” said Cardinal Mario Zenari, the Vatican envoy to Syria, during an online news conference on Tuesday (March 23).

Zenari said that struggles in Syria have “completely disappeared from the radars of the media” and been largely overlooked by the outside world in recent months. But Pope Francis remembers them, he said.

“Syria is far from being forgotten by the pope,” he said.

A visit by Pope Francis is not to be excluded, he added, “as soon as circumstances allow.”

Francis was the first pope ever to visit Iraq; during the trip March 5-8, he made an appeal for peace and interreligious dialogue while encouraging the local Christian population to rebuild their homes and communities.

RELATED: At the ancient city of Ur, Pope Francis makes heartfelt appeal for fraternity of faiths

Zenari’s remarks came during a news conference organized by Caritas Internationalis, a Vatican-led global network of Catholic relief and charity organizations, to address the ongoing humanitarian crisis in Syria. Caritas has been active in Syria for 50 years and reinforced its efforts to help migrants and refugees at the start of the Syrian civil war.

After the political uprisings across the Middle East in 2011, known as the Arab Spring, Syrians rose in opposition against President Bashar Assad. That set in motion a bloody civil war that included the involvement of countries such as the United States, Russia, Turkey and Israel.

According to the Syrian Observatory for Human Rights, over 380,000 people have died because of the war as of January 2020.

After his Angelus prayer on March 14, Pope Francis made a “heartfelt appeal” to all parties involved in the Syrian conflict to come together in goodwill, “so that a glimmer of hope may open up for the exhausted population.”

Millions of Syrians have left their home country as migrants and refugees, while 6 million are internally displaced because of the conflict.

“Syrians, and especially Syria’s youngest generation, cannot afford any more the trials and violence of this war. They deserve a better future,” the secretary-general of Caritas Internationalis, Aloysius John, said at the same news conference.

John asked for the “immediate removal of all unilateral sanctions” and the distribution of COVID-19 vaccines and basic necessities to help the struggling Syrian population. He also appealed to the international community to support the numerous nongovernmental organizations in the country and called for the interruption of all military action, which “will only build hatred and will not bring an end to this protracted war.”

According to the Syrian Ministry of Health, there are over 17,000 Syrians infected with COVID-19 and the virus had killed 1,163 people as of Sunday. Hospitals are full of coronavirus patients and many Syrians don’t go to the hospital since medicines and vaccines are lacking, according to Ryad Sargi, the director of Caritas Syria. 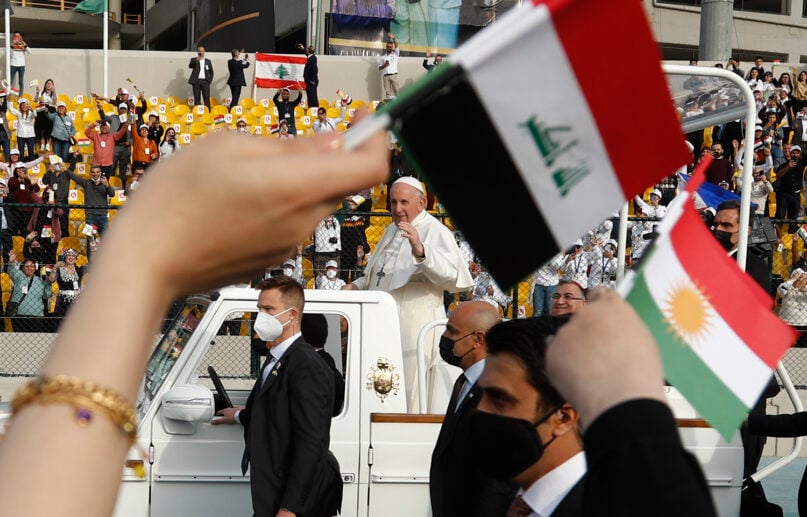 Pope Francis waves as he arrives for an open air Mass at a stadium in Irbil, Iraq, Sunday, March 7, 2021. Thousands of people filled the sports stadium in the northern city of Irbil for Pope Francis’ final event in his visit to Iraq: an open-air Mass featuring a statue of the Virgin Mary that was restored after Islamic militants chopped of the head and hands. (AP Photo/Hadi Mizban)

“In fact, the numbers of real infected patients are many times higher than the announced number,” Sargi said during the online conference. He added that the Syrian government has not enforced any safety precautions to avoid the spread of the pandemic.

Weighing on the shoulders of many Syrians are the economic sanctions imposed by the United States and European countries that have led to skyrocketing prices for food and fuel.

“The garbage containers in the streets became a source of food for the poorest,” Sargi said, also mentioning the lack of electricity and heating in the country.

In the grim reality of Syria today, Pope Francis’ support for the Syrian people has been a source of solace and comfort.

“Because of the crisis in the Middle East, Syria was forgotten,” said Melchite Archbishop Jean-Abdo Arbach of Homs, Hama and Yabroud, who is also the president of Caritas Syria.

“His Holiness Pope Francis’ visit to Iraq was very important,” Arbach said, adding that the pope’s presence encouraged many Muslims as well. “It was a message of peace and hope for all the region.”