BOULDER, Colorado (RNS) — The Table Mesa Shopping Center is ordinarily a hub of activity as locals swing in to do their errands. But since Monday’s (March 22) shooting at the King Soopers grocery store that killed a police officer and nine others, the small strip of stores has been fenced off as a crime scene, its chain-link barrier turned into a memorial for the victims.

Crosses, flowers, stuffed animals and signs calling for gun control line the fence, along with messages of love to the departed and invocations for prayer. Since Monday’s attack, reeling Boulderites, many representing the city’s diverse faith communities, have congregated along the road to pay their respects in such numbers that the city blocked off a lane of traffic to accommodate them.

On Tuesday, Rev. Deborah Hill, a priest at St. Elizabeth’s Episcopal Church, drove from her home in Gunbarrel to the memorial to pray with visitors not far from a sign reading “Pray 4 Boulder!”, adjacent to a row of Buddhist prayer flags.

OPINION: God did not give Americans guns. To say otherwise is heresy.

“The Lord is near to the brokenhearted and saves the crushed in spirit,” another sign read, quoting Psalm 34. A small pile of stones sits atop each of the 10 wooden crosses erected for the victims, a Jewish tradition.

On Thursday evening (March 25), a memorial vigil at nearby Fairview High School organized by the Colorado chapter of gun control advocacy group Moms Demand Action and attended by more than 1,000 people, was led by clergy from around Boulder.

Rabbi Fred Greene of Boulder’s Congregation Har HaShem opened the vigil, saying that since the attack, he had been thinking about a phrase from the book of Deuteronomy, usually translated from Hebrew as “You must not be indifferent,” Greene said. However, he offered a new translation: “You cannot hide.” 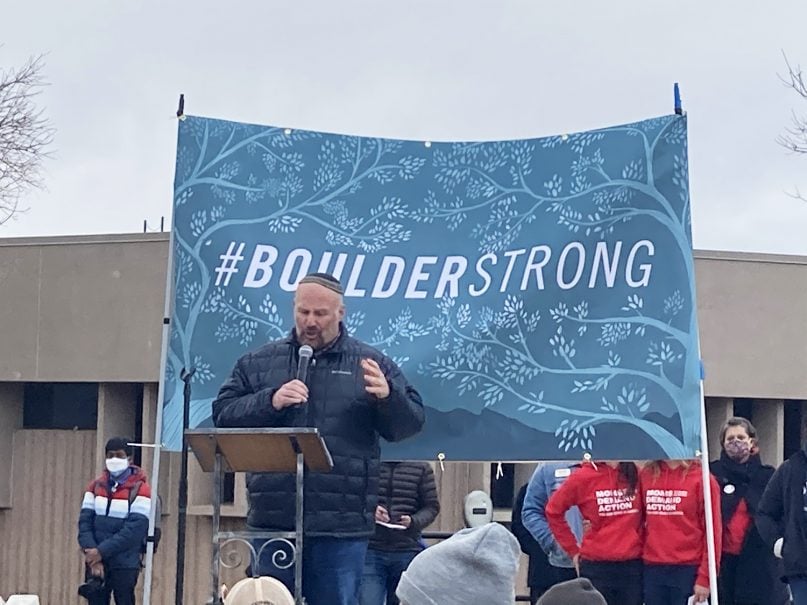 Rabbi Fred Greene speaks during a vigil on Tuesday for the people killed in the Boulder King Soopers shooting the day before. In addition to Greene, Pastor Randy Spaulding spoke during a second vigil Thursday night. Photo by Carina Louise Julig for RNS

“Tonight you cannot hide from the shock, from the grief and from the hurt,” Greene said. “I’m begging you — don’t hide, be real.

“Help us to not hide from the world, to face the chaos. Help us to be incapable of indifference, help us to be impatient with injustice,” said Greene.

The rabbi had also addressed an emergency city council meeting Wednesday along with the Rev. Mary Kate Rejouis, rector at St. Aidan’s Episcopal Church. The two offered a prayer and read the names of the 10 victims, who ranged in age from 20 to 65.

At least two of the victims were members of local faith communities. On Tuesday, Denver Archbishop Samuel J. Aquila released a statement saying that Eric Talley, the police officer who was killed responding to the scene, regularly attended St. Martin de Porres Catholic Church, just across the street from King Soopers. Aquila asked for the saint’s intercession in this difficult time so “that God would bring good out of this great evil.”

In the 1990s, Neven Stanisic’s parents immigrated to the U.S. from Bosnia to escape the violence engulfing the region. On Monday, the 23-year-old repairman fell victim to another form of violence when he was killed at King Soopers. 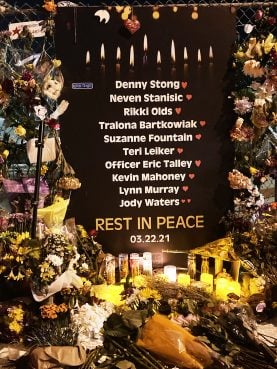 Signs reading #Boulderstrong hung from the fence with others naming the 10 victims killed in Monday’s shooting. Flowers and candles decorated the fence and signs as community members build a memorial. Photo by Carina Louise Julig for RNS

Stanisic was a member of St. John the Baptist Serbian Orthodox Church in Lakewood, Colorado, whose head priest, the Rev. Radovan Petrovic, told the Denver Post that Stanisic’s family was devastated to have sacrificed so much only for Stanisic to die in this way.

“To have this happen to him, that’s something neighbors and much of our community cannot comprehend,” Petrovic said to the Post.

The suspect in the shooting is 21-year-old Ahmad Al Aliwi Alissa of Arvada. He has been charged with 10 counts of first-degree murder and one count of attempted murder and was denied bond at a preliminary hearing on Thursday.

Law enforcement has yet to give a motive for the killings, but at the vigil at the high school, Islamic Center of Boulder representative Tracy Smith said that the suspect’s name has caused Muslims in Boulder to fear a backlash. Women with hijabs and men with beards have expressed fear about going outside, she said.

Smith said that the suspect does not represent Islam and that Muslims “want to live in harmony with their community.” She urged anyone who has questions about Islam to reach out to the ICB.

“We stand shoulder to shoulder with our Boulder neighbors in grief and solidarity,” she said, tearing up.

RELATED: Colorado shooting suspect had worried about being targeted for his Muslim faith, acquaintances say

The Muslim nonprofit CelebrateMercy launched a crowdfunding campaign for the Boulder victims that has raised $21,000 in the past several days. It joins campaigns on GoFundMe and the Colorado Healing Fund in raising thousands for survivors of the shooting and families of the victims.

The vigil ended with a prayer from Randy Spaulding, pastor at Boulder Mennonite Church.

“Spirit of justice, as we leave this place help us find our voice,” Spaulding said. “May we turn from the worship of power, may we have the courage to confront our false gods and to protest the needless deaths caused by gun violence. May we rise above our dread that nothing can be done and have the conviction to advocate for real, lasting change.”

Opinion
Overturn Dylann Roof’s death sentence — for me, not for him 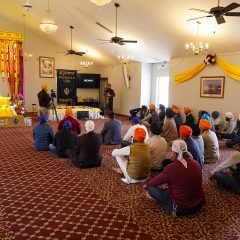 Articles of Faith
Treating the Indianapolis attack as a hate crime will keep us all safer
Follow us on Facebook!
Submit your photos to RNS