(RNS) — Muslim organizations are mourning and raising money for the 10 people killed in the mass shooting on Monday (March 22) at a King Soopers grocery store in Boulder, Colorado.

The Colorado Muslim Leadership Council on Tuesday released a statement in solidarity with the survivors and victims.

“Our hearts are heavy as we stand with the survivors of violence. We will continue to remember and grieve for the innocent victims of this horrific and senseless crime,” the statement read.

Boulder police Officer Eric Talley, one of the victims, “was personally known to many of us, and we are devastated by his death,” the statement noted.

RELATED: Colorado shooting suspect had worried about being targeted for his Muslim faith, acquaintances say

“We thank law enforcement for their bravery and commitment in apprehending the shooter. We call for the prosecution of the shooter to the fullest extent of the law,” the statement read.

Ahmad Al Aliwi Alissa, from the Denver suburb of Arvada, was booked into jail Tuesday on murder charges a day after the attack and is scheduled to make his first court appearance Thursday.

In news reports, Alissa has been described as a “very anti-social” man who appeared paranoid “about perceived slights against him.” Alissa worried about being targeted due to his Muslim faith, and his family said he suffered from mental health issues, according to interviews with his siblings and former classmates.

As further details about Alissa began to emerge, many expressed concern and fear over ramped-up Islamophobia.

Phrases and words like “He’s Muslim,” “Islamic” and “Middle Eastern” were trending Tuesday on Twitter. With Ramadan just a few weeks away, some also worried about potential hate crimes as Muslims are more likely to gather in congregational settings.

Please extend the energy you have for BLM and Stop Asian Hate to Muslims too. We’re about to go through the ringer, again, because the shooter in Colorado was “Muslim.” (Using quotes because no Muslim would ever do that).

Our holy month of Ramadan is a couple of weeks away –

The Islamic Center of Boulder, on its Facebook page, said its members were praying for those affected by the shooting.

“Our hearts are broken for lives lost and for the grief suffered by an entire community. For those who have lost loved ones, for those who witnessed the horrific events today, for those who feel helpless and fearful — may Allah bring you comfort and peace and healing. There are many, many members of ICB who are praying for each person affected by this violence,” the Islamic Center of Boulder said on Facebook.

The Islamic Society of North America in Plainfield, Indiana, issued a statement condemning the violence in Boulder as well as last week’s shootings in the Atlanta area that killed eight people, including six women of Asian descent.

The shooting in Boulder, the Islamic Society of North America said, “adds to the tragedies our nation is going through, including an increasing culture of hate.”

“As citizens, and members of the human family, we have the right to live in peace and safety. We must stand together and speak out against hate and racism.” 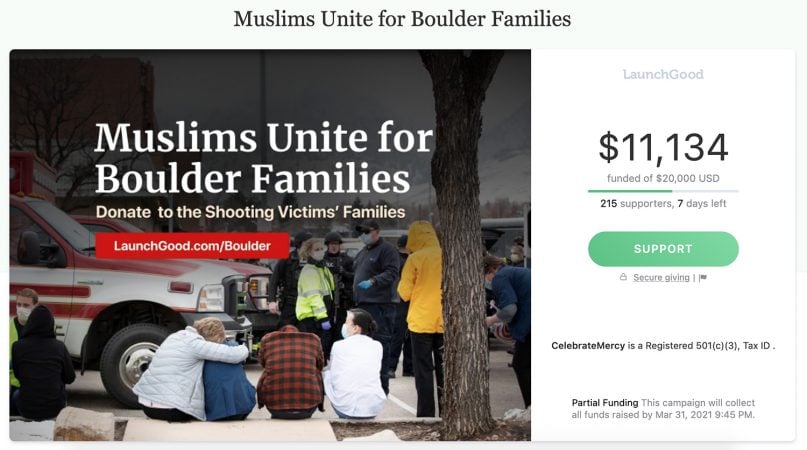 CelebrateMercy, a nonprofit that teaches about the Prophet Muhammad, started a crowdfunding campaign to raise money for the families of the victims killed in the Boulder shooting this week. More than $11,000 had been raised by midday Wednesday. Screenshot of crowdfunding website

CelebrateMercy, a nonprofit that teaches about the Prophet Muhammad to Muslims and the general public, launched the crowdfunding campaign “Muslims Unite for Boulder Families” on LaunchGood to raise funds for the victims’ families.

“We wish to respond to evil with good, as our faith instructs us, and send a powerful message of compassion through action,” CelebrateMercy said in the funding page.

“We ask for American Muslim mosques, Imams, leaders, and groups to endorse and promote this crowdfunding initiative for the victims’ families,” the group said.

CelebrateMercy said its initial goal is to raise $20,000 but plans are to continue raising more money if funds are raised quickly. As of early Wednesday afternoon, it had raised more than $11,000.

Though it’s a Muslim-led campaign, the group encouraged people of other faiths to contribute too.

In the funding page, CelebrateMercy shared a photo of a greeting card a non-Muslim Boulder resident left outside the Islamic Center of Boulder, offering to accompany anyone going to the grocery store or for a walk if they felt vulnerable.

“Please know that I and many others stand in solidarity with you,” the card read. 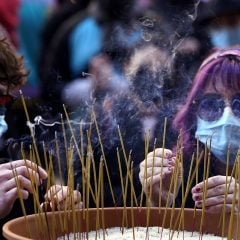 Opinion
Jesus wept over Jerusalem. Is he weeping over our gun problem? 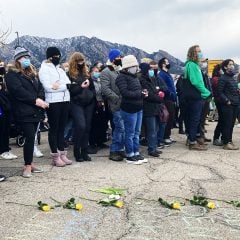 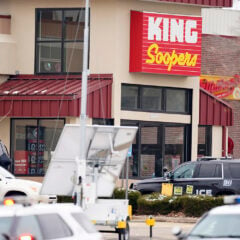 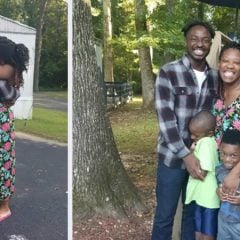