The U.N. special rapporteur on freedom of religion or belief, Ahmed Shaheed, announced the report’s release at a news conference last week. The report, officially titled “Countering Islamophobia/Anti-Muslim Hatred to Eliminate Discrimination and Intolerance Based on Religion or Belief,” notes an overall rise in Islamophobic incidents around the globe. The U.N. report used the terms “Islamophobia” and “anti-Muslim hate” interchangeably to avoid “condemning all critiques of Islam,” which it said could endanger academic freedom.

Opinion polling shows Muslims are increasingly seen in an unfavorable light. Citing data from other sources, the report notes that almost 4 in 10 Europeans held unfavorable views of Muslims in surveys conducted between 2018 and 2019. A survey of Americans conducted in 2017 found 30% held Muslims “in a negative light.” Yet, the report compiled at least one piece of potentially good news, according to a study conducted by the Organization for Security and Co-operation in Europe: Anti-Islamic attacks peaked in 2017 and have somewhat declined since then, though it was unclear if the sampling size was similar year to year.

RELATED: What to expect on the religious scene in 2021: Experts cast their sights on the year ahead

The rise of Islamophobia has been driven in part by local conditions in individual countries and regions in which underlying issues such as class and ethnicity often also played a role. The rise of far-right groups is another factor driving an increase in hate toward Muslims. “We welcome the recent report by the United Nations describing Islamophobia as reaching epidemic proportions,” said Erum Ikramullah, a research project manager at the Institute for Social Policy and Understanding. “These new U.N. findings are in line with ISPU data, which consistently find that American Muslims are the most likely faith group to report facing religious discrimination, at about 60% over the past five years.”

Around the globe, negative and one-sided portrayals of Muslims in the media have contributed to the rise of Islamophobia, according to the report. The U.N. report noted a European Commission against Racism and Intolerance study which found that of 600,000 Dutch news items in 2016 and 2017, the adjectives most used to describe Muslims were “radical,” “extremist” and “terrorist”; in contrast, Dutch people are often described as “known,” “average” and “beautiful.” 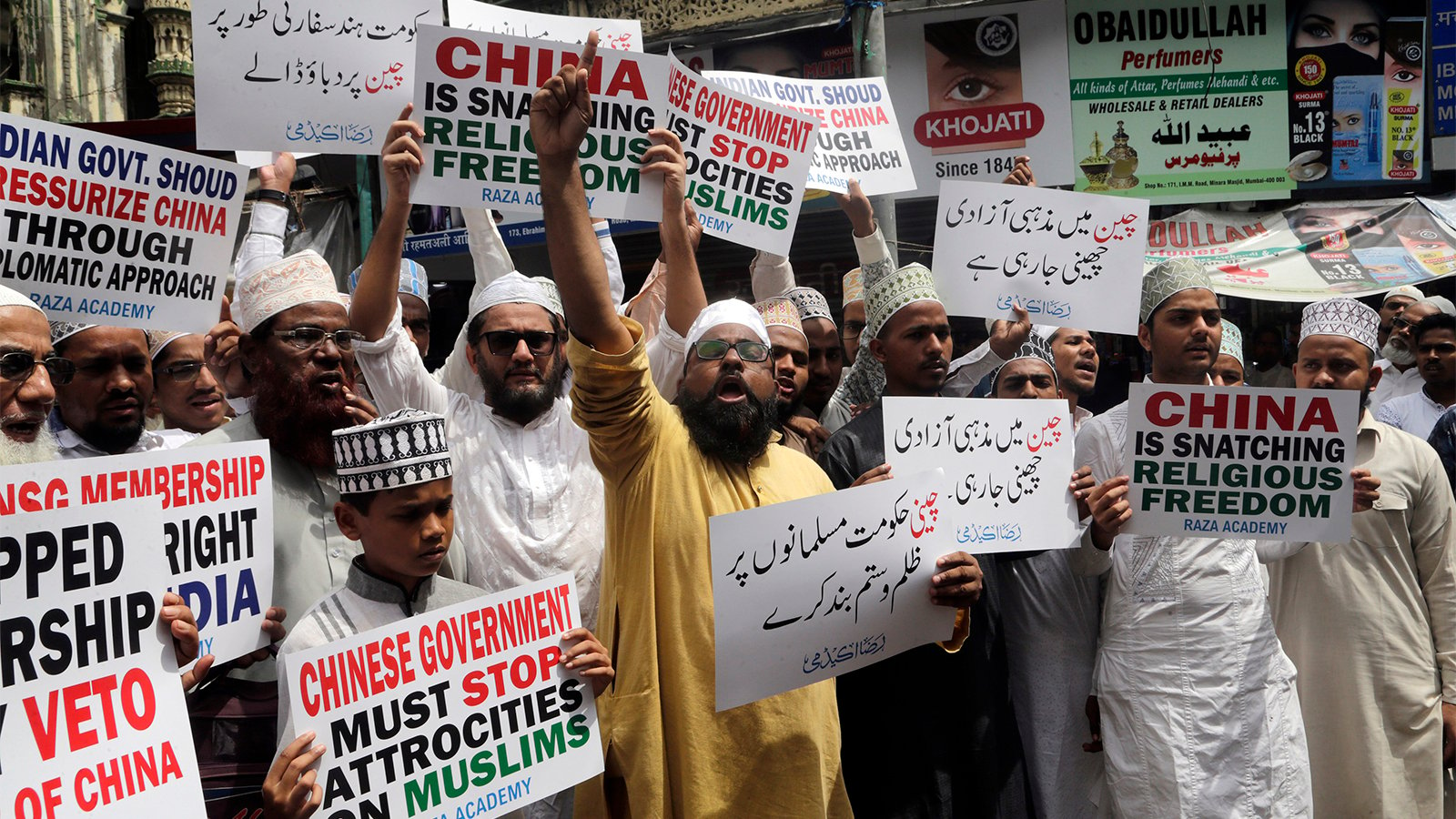 Indian Muslims shout slogans during a protest against the Chinese government, in Mumbai, India, on Sept. 14, 2018. Indian Muslims held a street protest in Mumbai, demanding that China stop detaining thousands of members of the minority Uyghur Muslim ethnic group in detention and political indoctrination centers in the Xinjiang region. (AP Photo/Rajanish Kakade)

The U.N. report’s sharpest critiques were for the policies of particular member states, including United Nations Security Council member states. The report noted that many states around the world sought to “restrict the right to freedom of religion or belief of Muslims; curtail the enjoyment of freedom of religion or belief by limiting Muslims’ other fundamental rights; and securitize Muslim communities and/or their organizations.”

Around the world, Muslim women are more likely to be victims of Islamophobic attacks than men. The report offered strong rebukes to the United Nations Security Council permanent members such as China and the United States. “In China, allegations have emerged that Uighur women are systematically raped, sexually abused, and tortured in so-called ‘re-education’ camps in Xinjiang Province.”

Nearly half a million children, most of them Uyghurs, have been forcibly placed in boarding schools and many Islamic scholars have been imprisoned, according to the report.

In the U.S., the government’s Controlled Application Review and Resolution Program was applied to immigrants from “Arab, Middle-Eastern and South-Asian countries” in a manner that discriminated against Muslims, said the report. It also criticized the program for allegedly using Muslim immigrants as de facto spies against their communities.

RELATED: As US refocuses anti-extremism programs on far right, many Muslims still oppose them

The document calls for governments around the world to fight discriminatory practices against Muslims across all settings — from police enforcement to the filtering of Islamophobic content on social media. Further interfaith dialogue between communities and outreach programs at various levels are strongly encouraged. The paper also calls for more intergovernmental efforts to combat Islamophobia through partnerships across various U.N. organizations.

Anti-Muslim hate “has inspired harmful policies like the Muslim ban and discriminatory surveillance on American Muslim communities,” said Madihha Ahussain, Muslim Advocates’ special counsel for anti-Muslim bigotry. “This hate has led to threats, violence and worse. That’s why it’s so important that everyone heed this report’s conclusion that all necessary steps must be taken to stamp out anti-Muslim discrimination and bigotry.”

The report was built off a number of roundtable consultations and bilateral meetings as well as engagements with civil society groups, human rights organizations, government institutions and intergovernmental organizations.

The United States withdrew its membership from the United Nations Human Rights Council under the administration of President Donald Trump. Last month, U.S. Secretary of State Antony Blinken vowed to return the United States to the organization as an observer later this year.