CHICAGO (RNS) — At events in 14 cities across the U.S., an estimated 5,000 people demonstrated in support of Asian Americans and Pacific Islanders Sunday (March 28) after attacks on people of Asian descent in the Atlanta area this month.

Among the eight people killed at three spas in the Atlanta area March 16, six were women of Asian descent.

Denise Peñacerrada Kruse, her husband and their three children traveled about 300 miles from the St. Louis area to Chicago to take part in the rally and march there, which began outside the Uplift Community High School in the city’s Uptown neighborhood.

“Healing happens in community,” Peñacerrada Kruse, an editor with the Asian American Christian Collaborative, told the crowd as her 3-year-old daughter gleefully shouted into the microphone. 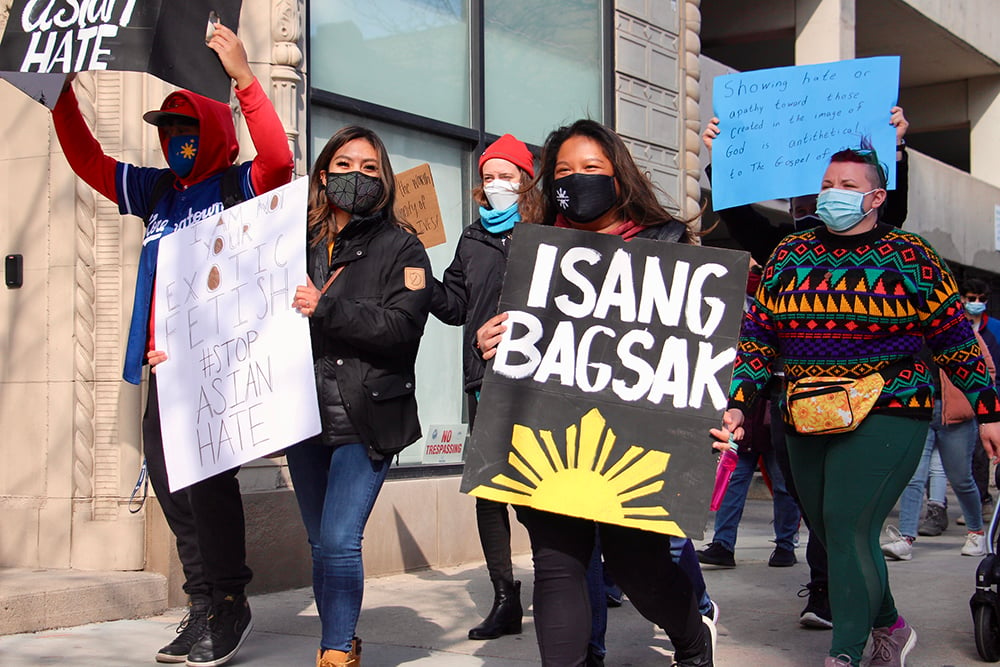 The Chicago rally and march, organized by the Asian American Christian Collaborative, was one of 14 events Sunday, March 28, 2021, held as part of the National Rally for AAPI Lives and Dignity. RNS photo by Emily McFarlan Miller

AACC formed a year ago in response to the uptick in anti-Asian racism that accompanied the COVID-19 pandemic, as some, including elected leaders, have blamed China for the virus’s spread.

The group hosted its first event in Chicago last year, in the aftermath of the deaths of Ahmaud Arbery, Breonna Taylor and George Floyd, gathering more than 1,000 people at its March for Black Lives and Dignity.

Justin Giboney, president of the AND Campaign, a Christian social justice coalition that was one of the rallies’ co-sponsors, told Religion News Service that it is important for the Black community to turn out now in support of the AAPI community, to say, “Hey, we’re with you, and when given the opportunity to stand up for you, we will.”

Many groups in America haven’t shown up for each other in that way up to this point, said Giboney, who spoke in Atlanta Sunday. But he believes they have an opportunity to take a new direction now — and the church can lead the way. 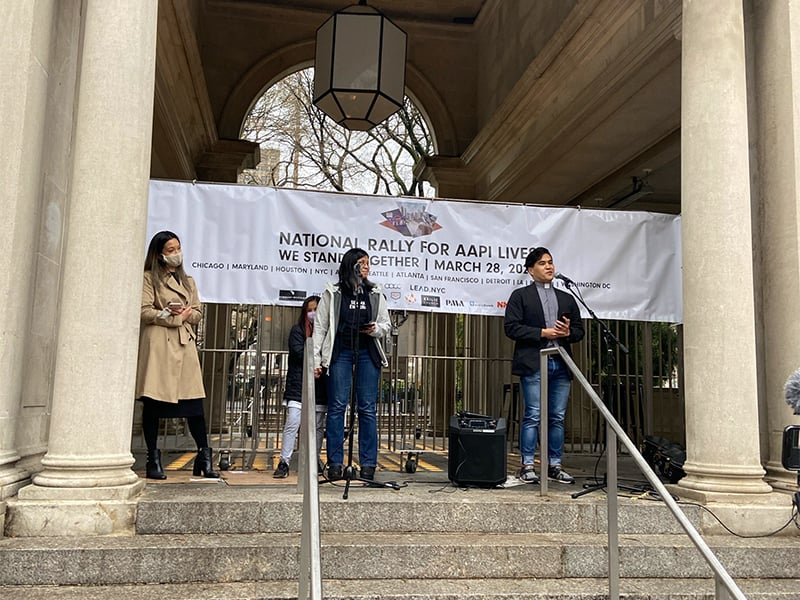 “Over the last year, we watched our Black friends. We absorbed some of their language and are learning some of their skills,” said Reyn Cabinte, a pastor in Washington Heights, who spoke at the New York event, held between downpours in Union Square.

“We don’t have a long history of self-advocacy,” Cabinte said about Asian Americans.

Cabinte, whose multiethnic church is located in a predominantly Dominican and Jewish neighborhood, has urged his congregation in the past year to speak up for Black lives. Watching the uptick in Asian American violence, however, he felt a growing tension with what he called “the binary nature of the American justice conversation, where Black and white dominate the vocabulary and the attention.”

Asian Americans, Cabinte said, need to learn to tell their own stories. “We’re fighting for room to expose white supremacy from our perspective. We are asking for permission to complicate the justice discussion, the race discussion,” Cabinte said.

“What’s been going on has been pretty burdensome on our hearts,” said Arah Cho, of Joy Manhattan Church, located in Koreatown, and the lead coordinator of the New York rally. She described a prayer meeting at her church the week before, after the Atlanta attacks: “It turned into a two-hour conversation. We weren’t sure how to process. We felt a lot of things, but we weren’t sure what we were feeling.”

Sunday’s rally included prayers of lament, healing and repentance, as several speakers apologized for staying silent too long in the face of anti-Black racism and acknowledged even the Asian American church had marginalized women.

Julie Won, who is running for city council in District 26 in Queens, which includes several predominantly Asian American neighborhoods, noted Asians are the fastest-growing immigrant population in New York City and are also, per capita, the largest group living under the poverty line. Speaking to RNS after the event, Won, a first-generation Korean immigrant, said the Asian American experience is often misunderstood or stereotyped. “We’re not all the same, and we have very different historical backgrounds. There is such a richness to our culture and our heritage and our immigrant experience that people don’t realize.”

At Seoul International Park in Los Angeles, where signs dotted the park lawn with messages such as “We belong here!” and “Jesus Restores,” the Rev. Janette Ok also addressed stereotypes of Asian Americans as a “model minority.”

“A challenge we face as Asian American Christians,” Ok, a professor at Fuller Seminary and pastor at Ekko Church, told the crowd, “is recognizing that our identity in Christ … our identity comes, not because we’re exceptional from certain things that we do from being the good minority, no. … It comes from how God calls us, from who we are in Christ.” 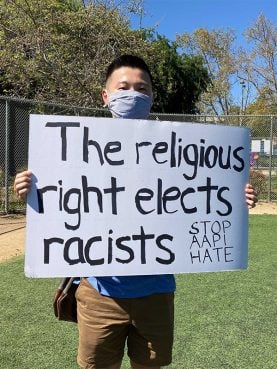 Justin Koh, 36, of Los Angeles, told RNS he has struggled with his own faith because he said the church has suppressed “minority voices in order to accept what white American churches have to say for them.”

Koh, who was raised by adoptive white parents in Washington state, said he wasn’t exposed to the Korean American church until college, which, he added, was “part of a broader process of finding my ethnic identity and Koreanizing myself.” He now attends Citizens in downtown L.A., a church he said lines up with his values.

In Chicago, AACC chose to march through the Uptown neighborhood after a 60-year-old Vietnamese American man reportedly was punched by one man in the head and was followed by another carrying a baseball bat days earlier there, explained Gabriel Catanus, lead pastor of Garden City Covenant Church.

Carrying a cardboard sign bearing the names of each person killed in the Atlanta shootings, Joseph Tam, 25, of Chicago, said it was important to grieve and lament their losses, “real people with lives and stories.”

It also felt important to Tam, who attends the multiethnic River City Community Church in the city’s Humboldt Park neighborhood, to be around other members of the Asian American faith community — especially at a time when it’s easy to feel isolated during the COVID-19 pandemic.

“Justice is God’s character in the Bible,” he said.

“I think we show love to other people by fighting against injustice, by not being afraid to look it in the eye, because evil and sin are present around us. I firmly believe that Christ is more powerful than all of those things. I know that in the midst of hurt, in the midst of loss and grief, he’s with us,” he said. This story has been corrected to add Chicago to the list of cities.