(RNS) — Gospel singer Donnie McClurkin says he expects to “probably be alone for the rest of my life as far as a mate is concerned.”

The Grammy-winning pastor is featured in an interview airing on Easter Sunday (April 4) on TV One’s “Uncensored.” The network posted clips of the interview on its website in advance of the airing.

The interview continues a series of revelations over the years in which the singer has discussed his sexuality. He has described himself as a victim of childhood sex abuse and was criticized by gay rights groups when he claimed he had overcome homosexuality.

He told Religion News Service in 2019: “I’ve never been a part of any ex-gay anything.”

In the new interview, McClurkin spoke to TV One about his interest in people of different genders over the years.

“I didn’t know, really, what a woman wanted. I’ve messed up more than I’ve had good,” he says. “My past relationships were a sprinkling of everything, men and women. I don’t know how to do this.”

McClurkin, 61, is pastor of Perfecting Faith Church in Freeport, New York, which he told RNS has heterosexual and LGBTQ attenders. “I believe in the love of God that reaches out to everybody,” he said.

He told TV One he considers his ministry and music to be his “safe place,” even though he grieves not having a marital relationship.

RELATED: Almost 60, Donnie McClurkin says ‘I’m at a time now I sing when I want to’

“I want to lay down next to somebody that’s going to be with me for the rest of my life, I really do,” he said. “I miss the fact that I did not have the family unit, that I could lay next to my spouse with my baby on my chest and be the quintessential dad that raises up a family like I saw in my dreams and I wanted in my heart.”

In 2016 MadameNoire reported McClurkin and Nicole C. Mullen, another gospel singer, were dating.

In the TV One interview, he describes times of uncertainty and success.

McClurkin recalls how he thought his career was over when news broke in 2000 he had fathered a child.

“Had to stop singing,” he said, noting he was a featured musician at televangelist Benny Hinn events at the time. “Couldn’t travel and sing anymore.”

McClurkin later wrote “We Fall Down,” a popular song whose lyrics continue, “but we get up.”

“I was singing it because it related to me,” he said.

Despite the challenges in his life, McClurkin told TV One he has found joy.

“Happiness is something that’s relative,” he said. “I’ve got joy. Joy is consistent. Happiness is based on what happens. But joy is a constant type of assurance that everything’s going to be OK.” 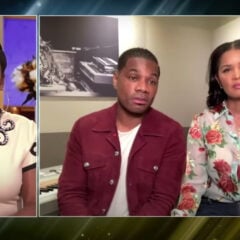 News
Kirk Franklin says of son in TV interview: ‘there hasn’t been any physical abuse’ 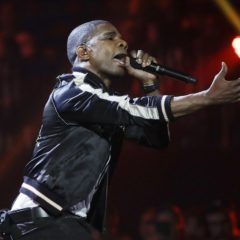