(RNS) — Hans Küng, the contentious Roman Catholic theologian who died at 93 on Tuesday (April 6), once explained his combative nature by pointing out that he was Swiss.

“I come from the land of William Tell and we weren’t brought up to be subservient,” he said. “Why should we always crawl? Standing tall suits a theologian too.”

Küng paid dearly for that independence, being stripped of his right to teach Catholic theology by St. John Paul II and repeatedly frustrated in his efforts to reform the tradition-bound Vatican.

But Küng’s theology books became bestsellers, his articles were printed around the world and his causes — such as abolishing priestly celibacy, challenging papal infallibility and championing interreligious dialogue — became markers for a more open and questioning Catholicism.

“Küng remained one of the spokesmen of an informal global liberal Catholicism that never found its organizational form,” said Bernhard Lang, a German theologian who studied under Küng at Tübingen University.

“The rebellious Swiss was jokingly called ‘Martin Luther Küng’ by his followers, but he didn’t see himself as a Martin Luther.” He never wanted to found a new church, just reform the Catholic one he belonged to, Lang noted in the Neue Zürcher Zeitung.

“Hans Küng loved the church. He even loved the pope,” Bishop Felix Gmür of Basel, head of the Swiss bishops’ conference, said on learning the theologian had died in his home in Tübingen in southwestern Germany.

“He wanted a renewed church that deals with people’s lives as they are and the world as it is.”

Bishop Georg Bätzing, head of the bishops’ conference in neighboring Germany, hailed his “concern to make the gospel message understandable and give it a place in believers’ lives.”

It’s often forgotten that Küng, who was born in Sursee in Lucerne canton in 1928, was a loyal priest in good standing, educated in Catholic universities in Rome and Paris and incardinated, or registered as a priest, in his home diocese of Basel. He also wore suits, drove sports cars and skied until late in his long life.

He was self-assured to the point of arrogance, unafraid to criticize popes and question church teachings. After the Vatican barred him from teaching Catholic theology in 1979, he continued as a professor of  ecumenical theology at Tübingen, whose theology department has deep tradition that included Joseph Ratzinger, later Pope Benedict XVI. In 1995 Küng launched the Global Ethic Foundation to find common ethical ground among the world’s faiths.

Küng crossed swords early on with the Vatican, which began investigating him in 1957 after he published a book questioning whether Catholics and Protestants were really so divided over issues that led to the Reformation.

He played an active role at the Second Vatican Council in the early 1960s, where as a theological adviser he argued for liberalizing reforms and dashed off speeches in Latin — the official council language — for bishops from several countries to read to the plenary. 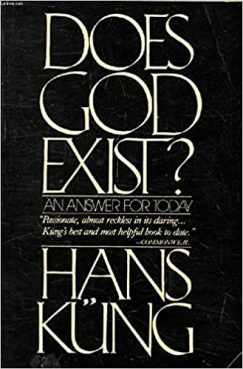 “Does God Exist?” by Hans Küng. Image courtesy of Amazon

In subsequent years, he repeatedly challenged church teaching with bestsellers such as “Infallible?” (1970), “On Being a Christian” (1974) and “Does God Exist?” (1978). After he wrote a stinging criticism of St. John Paul II’s first year in office, the Vatican withdrew his permission to teach Catholic theology.

His growing interest in other religions prompted Küng, who spoke six languages fluently, to also write books about Judaism, Islam and Asian faiths. His works have been translated into about 30 different languages.

Küng had a famously complicated relationship with Pope Benedict XVI, whom he brought to Tübingen to teach in the 1960s when the then-Father Ratzinger was a liberal theologian. He later turned more conservative and headed the Vatican’s doctrinal watchdog agency, the Congregation for the Doctrine of the Faith, before becoming pope in 2005.

Shortly after that, the two former colleagues held a private meeting to discuss world ethical questions. Benedict did not lift Küng’s teaching ban and the theologian soon went back to blasting the conservative pope.

He was enthusiastic at the election of Pope Francis in 2013, seeing in him a possible successor to the reforming Pope John XXIII, but gradually grew disillusioned with him too.

The Vatican daily L’Osservatore Romano carried an interview on Wednesday with Cardinal Walter Kasper, former head of the Pontifical Council for Promoting Christian Unity, who was Küng’s assistant in Tübingen as a graduate student in the early 1960s.

“He was a combative man, he loved a dialogue painted in strong colors,” the German cardinal recalled. “We had our differences, but that never caused any enmity. … In the depth of his heart, he was Catholic. He never thought of leaving the church.” Küng had given the church “reform ideas that have become current issues in Germany,” Kasper said, including ideas such as women’s ordination or optional celibacy with which Kasper did not agree.

“Küng spearheaded two major developments in Catholic theology after Vatican II,” Massimo Faggioli, professor of historical theology at Villanova University, told Religion News Service. “His books took theology out of the shadow of church control and he looked at religions with a global perspective. His work on global ethics made him unique in appeal and influence.”

Margot Kässmann, a prominent German Lutheran theologian, recalled Küng’s example for others. “As a student, I learned from him how to stand tall,” she said. “You have to stand up for your convictions, even if they are not always a majority in your church.”

German President Frank-Walter Steinmeier, also a Protestant, praised Küng as an exemplary public intellectual in a condolence message to his sister. “With his Swiss incorruptibility, he never evaded the necessary dispute about the right path to peace and understanding,” he wrote.

RELATED: A Catholic scholar weighs Biden’s future with Vatican and US bishops

The London Catholic weekly The Tablet, a regular outlet for Küng’s articles, called the late theologian “one of the most influential and prophetic voices of 20th century Christianity.”

It quoted the Rev. Yves Congar, a French theologian also active at the Second Vatican Council, as saying of his Swiss colleague: “Küng goes straight ahead like an arrow. He is a demanding, revolutionary type, rather impatient … We need such people.”