NEW YORK (RNS)  —  Umair Saad loved Ramadan, the Muslim holy month of fasting and prayer. The Long Island resident would wait for it all year long, excited to sit down with his family to iftar, the meal that breaks the day’s fast at sundown, and to join the crowd at the local mosque to pray the nightly prayers called tarawih, followed by breakfast before sunrise.

But last year, when Ramadan fell during the worst of the pandemic, mosques were closed, crowds were forbidden and restaurants were shuttered. Saad spent it mostly at home. He led the daily prayers while his son led tarawih. He waited for the next year to provide some normalcy, his niece Sara Mohamad told Religion News Service.

In December, Saad had a heart attack and died at age 57. Like other Muslims being mourned by families left behind, he wouldn’t get to share another Ramadan.

RELATED: Faith and the COVID-19 vaccine: ‘Muslims were among the first to believe in vaccines’

“He was always one of the first people at the masjid,” said Mohamad, using the Arabic word for mosque. “When the pandemic came and mosques were closed, he got very upset. But at the same time, he understood why. He would tell us this happened for a reason and was a test from Allah and that we should be patient.”

This year, Ramadan will begin on Monday or Tuesday (April 12 or 13), depending on when Muslims around the world sight the new moon that signals the beginning of the lunar month.

Before the pandemic, tarawih prayers inevitably drew Muslims who rarely attend the mosque. But in the first week of Ramadan 2020, with the number of cases rising every day in the city, people had little choice but to go virtual for Ramadan.

A year later, about 30% of adult New Yorkers and half of those 65 and older have received at least one dose of a vaccine, according to The New York Times. Indoor dining has returned, people are going back to work, and while some mosques remain hesitant, others are preparing to open for tarawih with strict precautions. Children react from inside their family’s car as a volunteer from the Muslim Community Center blows bubbles at them as part of an Eid al-Fitr celebration marking the end of the fasting month of Ramadan, in the Sunset Park neighborhood of Brooklyn, May 24, 2020, in New York. Due to the need for social distancing because of the coronavirus pandemic, the celebration was held as a drive-thru event in which sweets and toys were handout out. (AP Photo/Kathy Willens)

Majlis Ash-Shura-Islamic Leadership Council of New York, an umbrella organization for 90 mosques and other organizations that much of the Muslim community looks to for guidance, recently released COVID-19 tarawih guidelines.

“Many masjids have already opened for a while now and are following the 6-feet rule, masks, social distancing, the basic CDC guidelines,” said Lamiya Khandaker, the project manager at Majlis Ash-Shura. “But tarawih is one of those times where the membership in masjids increases. Many masjids are confused about what to do and don’t have the capacity to handle a large load of people.”

Khandaker believes the guidelines are a step toward the day when all mosques will fully reopen. “Islam tells us we need to remain optimistic and we need to remain steadfast through hardships. It’s something that’s obligatory upon us no matter how bad things get. Allah commands us as a Muslim community to never lose hope, never lose faith,” she said.

The Muslim American Society Youth Center in the Bath Beach section of Brooklyn is making final preparations to be open for tarawih this year, employing two security guards to enforce distancing rules. Sixty people will be allowed on each of the center’s three floors, entering and exiting from the different entrances to avoid gathering, with no children allowed. Take-away iftar will be offered on Fridays and Saturdays.

Though preregistration would add a further level of safety, “we’re not doing sign-up because unfortunately our community is not computer savvy with all the technology that is going on, and if we do that, that’s going to stop the older generation from coming to tarawih,” said the center’s operational manager, who calls herself Sister Fatima.

While celebrating the ability to gather this year, Sister Fatima maintains that last year’s Ramadan was the best one yet.

“We took our masjids for granted,” she explained. “Last year, there was more family bonding, the kids didn’t go out on the streets, the father and son led salah (Muslims’ daily prayers), families prayed tarawih together, they cooked together, they ate together.”

Mohamed Bahe, co-founder of Muslims Giving Back, a Brooklyn nonprofit, agrees. “It actually made us appreciate Ramadan more and not to take it for granted. It will definitely make Muslims a lot more observant this year during this holy month,” he said. At the same time, Bahe calls this Ramadan “more important than any other in a long time.”

Gazi Hafiz, a board member at the Baitush Sharaf Jame Masjid in Brooklyn’s Prospect Heights neighborhood, told RNS that the community has been devastated by COVID-19. But with pain comes understanding, he explained.

“One would think that when something happens every other week, you would at a point get used to it. But death and suffering is such a humbling factor that kept reminding us about the hereafter,” he said.

“With that, I believe our Muslim community has finally come to an understanding of the meaning of life and communion not just theoretically but practically. I feel people at the mosque are more in tuned with their beliefs now more than ever.”

With the positive experiences of online Ramadan, and still haunted by the toll of the pandemic, some mosque leaders are happy to exercise strict caution this year. 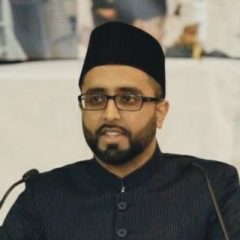 Mahmood Kauser, the regional imam for the Ahmadiyya Muslim Community, oversees four mosques across the New York metropolitan area, all of which have already reopened for the five daily prayers and jumah, or Friday prayer. But they will not be offering tarawih during Ramadan.

Kauser is content to take the gains of being able to meet for daily prayers in small groups. “That’s a huge game changer for a lot of people, especially those who are suffering from depression and loneliness,” he said.

RELATED: Muslim candidate for Manhattan DA runs to give victims of system a ‘seat at the table’

“What we are basically encouraging is that each home should function as a mosque, especially this Ramadan,” Kauser said. “We’re the one religion that does not need an altar, a chapel, a synagogue. In fact, the entire world has been made a place of worship for us. In that same way, we are encouraging our members to do their tarawih prayers in their home.”

At the four mosques he oversees, only people at a low risk for COVID-19 are permitted, and all  services are kept to a 20-minute time frame. But Kauser said the restrictions aren’t feasible for tarawih, which is why Ramadan services will go virtual again.

“Right now, we have a great number of people walk into our mosque with their masks on, with their prayer mats, excited. We do our prayers and there’s no mingling more than that. They see each other, say salaam, and proceed home. But even those few seconds of interaction have proven to be very useful. Down the line I am hopeful that things will get much better. You just have to have faith.”