VATICAN CITY (RNS) — In the Vatican’s Apostolic Library on March 27, Pope Francis had his first official meeting with Mario Draghi, the new prime minister of Italy. An ally across the Tiber River could prove beneficial for the Vatican, but it might require this pontificate to move its center of gravity away from the East and toward the Atlantic once again.

Good relations between the Italian leadership and the popes tend to have massive repercussions, not only in the peninsula but also within Vatican City and for the estimated 1.2 billion Catholics in the world. Francis and Draghi are both perceived as reformers, at a time when Italy and Catholicism face staggering challenges. They could become a powerful duo when it comes to the future of Europe, the environmental crisis and immigration.

The deep, historical ties between the Vatican and Italy have always had an impact on the Catholic Church. While Vatican City is an independent state, it is in the heart of Italy’s political and geographical center. From the birth of the Italian Republic to the dictatorship of Benito Mussolini to Silvio Berlusconi’s “bunga bunga,” popes have had to negotiate the interconnected nature of relations with Rome.

Francis and Draghi have a long history and have partnered together in the past. But as Draghi assumes his new role over the Italian government, the relationship faces obstacles. A series of mishaps concerning Vatican financial scandals risks hindering diplomatic ties with Italy, while Draghi’s outspoken criticism of China and Russia is at odds with Pope Francis’ continued efforts of appeasement with Beijing.

Common goals and a desire for reform

When Pope Francis was elected in 2013, he picked up a church in shambles. His predecessor, Pope Benedict XVI, shocked the world when he announced his retirement and chose to live as emeritus pope at the Vatican. Sexual abuse scandals emptied the pews and media reports uncovered decades of financial mismanagement. Francis was brought in as a reformer, with the hope he might restore the church’s structural and moral credibility worldwide.

Draghi comes into the picture in a similar way. Not only have years of political instability and corruption crippled the Italian economy, but the pandemic has dealt a devastating blow to the peninsula, with unemployment rates skyrocketing to over 10% in February, according to the latest data from the Italian statistical agency ISTAT.

During his first speech to members of the Italian Parliament on Feb. 17, when Draghi told lawmakers that “today, unity is not an opinion, unity is a duty,” it’s hard not to see the similarities with Pope Francis’ reminder one year ago that in facing the pandemic and today’s global challenges “we’re all in the same boat.”

In line with Francis’ continued appeals to cater to those who have suffered the most during the pandemic, Draghi vowed to “take care of those who are suffering now, those who are losing their jobs or forced to close their businesses.”

When it comes to the environment, Draghi was even more explicit about who he took his cues from, quoting Pope Francis directly. “We want to leave behind a healthy planet,” he said, “not only a healthy economy.” 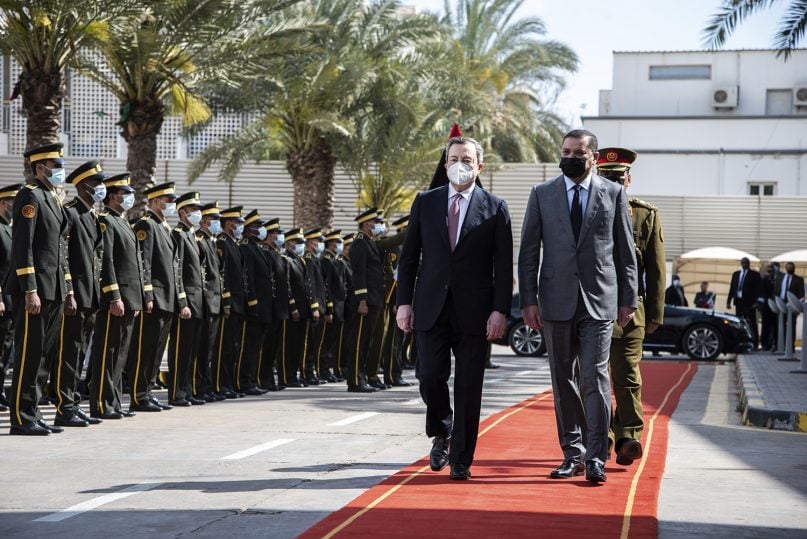 Francis and Draghi also have in common the isolation of the reformer, even more strident when addressing the topic of immigration. Francis’ first trip was to the island of Lampedusa, where immigrants and refugees are amassed in camps. Draghi’s first foreign visit, on Tuesday and Wednesday (April 6-7), was to the Northern African country of Libya, which beyond being instrumental for Italy’s economy is an important point of passage for immigrants coming to Europe.

Just as Francis faced considerable backlash for his efforts in promoting the safeguard of immigrants, Draghi has met opposition from those who think his policies are doing too little — or too much — to regulate migratory routes in the Mediterranean.

Even before his speech, Draghi held a strong reputation in Catholic circles. In 2013, when he was still president of the European Central Bank, he and his family were invited to have a private audience with the pope at the Vatican. Only last year, Francis appointed Draghi to be an ordinary member of the Pontifical Academy for Social Sciences, the Vatican think tank on social and political issues.

On March 2, Draghi met with Pope Francis’ right-hand man, Vatican Secretary of State Cardinal Pietro Parolin, and the head of the Italian Bishops’ Conference, Cardinal Gualtiero Bassetti, for the 92nd anniversary of the Lateran Treaty, which defined relations between the Vatican and Italy.

Not only is Draghi a Catholic, but he attended a Roman high school run by Jesuits, the same order to which Pope Francis belongs. The prime minister has credited the order with teaching him “rigor,” a defining trait of his career spent handling the European sovereign debt crisis. Last year he spoke at the Rimini Meeting, a massive annual gathering organized by the Catholic movement Communion and Liberation. Sitting next to Draghi during the audience with Pope Francis on March 27 was Marta Cartabia, whom Draghi appointed as minister of justice and who has strong ties to the Catholic movement.

While Francis and Draghi share common values and similar agendas, there are tensions underlying the Vatican’s relationship with Italy. Draghi’s meeting with the pope coincided with the inauguration of the Vatican state tribunal, which has recently been embroiled in embarrassing faux pas concerning its treatment of lay Italian employees.

An extradition request by Vatican prosecutors for Cecilia Marogna, a laywoman named in Catholic financial scandals, was abandoned before it could be deemed unlawful by Italian judges last January. An application by Vatican prosecutors accusing another Italian layman, Gianluigi Torzi, of fraud, extortion and money laundering was found to be riddled with “non-disclosures and misrepresentation,” in a decision by a U.K. judge March 10.

Speaking to Vatican prosecutors on March 27, and with Draghi sitting in the front row, Francis called for further international cooperation, while condemning clericalism in the church and acknowledging the urgency of addressing financial crimes at the Vatican. He also promised penal reforms, which could help the Vatican judiciary fulfill the expectations of modern criminal justice systems.

The pope’s words could temporarily mend the friction between Vatican and Italian judicial systems, and the fact that his first meeting with Draghi took place in this circumstance would indicate Francis wished to start off relations on solid footing. 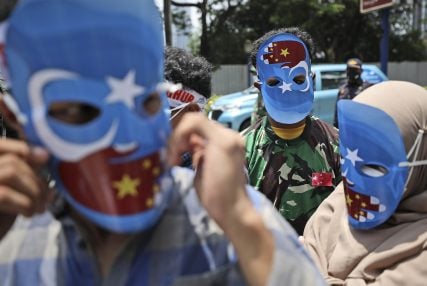 Muslim students wearing masks with the colors of the pro-independence East Turkistan flag attend a rally outside the Chinese Embassy in Jakarta, Indonesia, Thursday, March 25, 2021. About a dozen of students staged the rally calling to an end to alleged oppression against Muslim Uyghur ethnic minority in China’s region of Xinjiang. (AP Photo/Dita Alangkara)

Things might be trickier when it comes to China. In setting out his foreign policy, Draghi said his government would be “strongly pro-European and Atlanticist, in line with Italy’s historical anchors.” He also voiced concern with “the increasing tensions in Asia surrounding China,” before hinting at human rights violations in the People’s Republic.

The Vatican has renewed a controversial deal with Beijing on the appointment of bishops, an effort to strengthen the precarious situation of Chinese Catholics divided between an officially recognized and state-controlled church and an underground church loyal to the pope. Francis has been strongly criticized for the provisional deal, which remains undisclosed, and especially for failing to condemn human rights violations in China, particularly against the Uyghur Muslim community.

Draghi’s foreign policy might prove problematic for the Vatican regarding China, but beneficial for its relations with the United States. President Joe Biden is the second Catholic president in the history of the United States and has taken a strong stance against Beijing.

If Francis shifts the Vatican axis toward the West, he could strengthen his position with two political allies — with the added benefit of shutting down conservative opponents — but at the cost of setting back decades of negotiations with a rising superpower and putting the future of its 13 million Chinese Catholics at risk.