WASHINGTON (RNS) — President Joe Biden’s administration has reversed a decision to keep in place a historically low cap on refugee admissions left by Donald Trump, saying it will raise the ceiling next month after faith-based groups initially decried the move as an “abandonment of our ideals.”

Biden signed a memorandum Friday (April 16) aimed at speeding up refugee admissions this year — but that memorandum does not increase the so-called refugee ceiling, something the president has pledged to do when speaking to religious audiences.

Although the memorandum leaves open the possibility of raising that number should the United States resettle the maximum 15,000 refugees this year, news that the ceiling will at least temporarily remain at that historic low was met with disappointment by many religious communities, including the faith-based groups that partner with the federal government to resettle refugees.

By Friday afternoon, The Associated Press and CNN reported the Biden administration has reversed course, announcing plans to lift the Trump-era refugee cap next month in the wake of widespread pushback from allies.

The White House confirmed to Religion News Service on Friday that officials intend to revisit the refugee ceiling sometime in the coming days, saying in a statement, “We expect the President to set a final, increased refugee cap for the remainder of this fiscal year by May 15.”

Soerens was one of many religious leaders who expressed outrage at initial reports Biden planned to leave the cap in place, referencing the president’s campaign slogan and declaring, “This is a breathtaking betrayal of the plan to ‘build back better.'”

He added: “As a Christian, I’m reminded I should never have, as the psalmist said, put my ‘trust in princes’ (Ps 146:3), but if I’m honest, I fully trusted President Biden’s commitment to rebuild the refugee resettlement program: he literally wrote a foreword to a book by a Catholic priest on refugees.”

Soerens’ sentiments were echoed in an email by Jenny Yang, vice president for advocacy and policy at World Relief.

“The President has effectively abandoned his commitment to help refugees around the world by keeping the refugee ceiling at 15,000 for this fiscal year, backtracking on the promise he made in February to raise the refugee ceiling to 62,500,” Yang wrote.

Adding, “President Biden is keeping the lowest refugee ceiling ever set in the history of the program which means the President is continuing Trump’s draconian policies that shut the door on those fleeing persecution.” 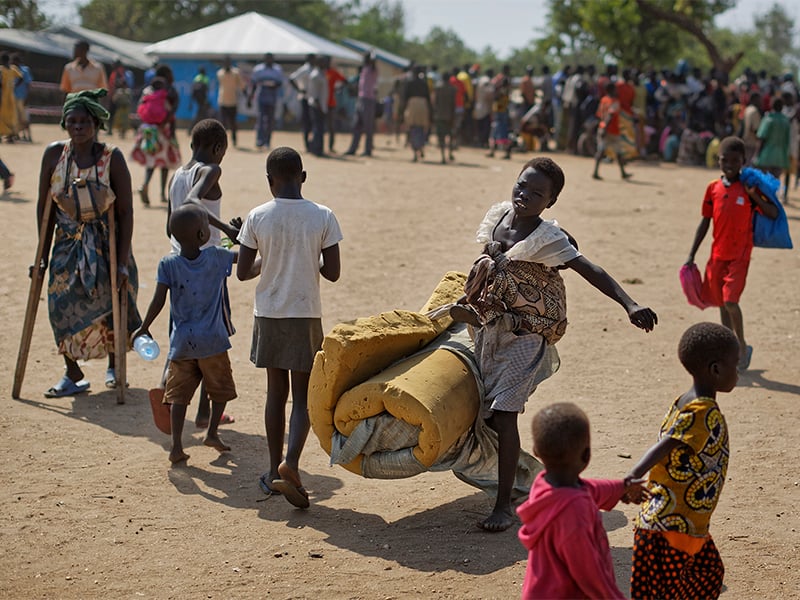 A South Sudanese refugee female with a baby on her back carries a foam mattress to the communal tent where they will sleep, at the Imvepi reception center, where newly arrived refugees are processed before being allocated plots of land in the nearby Bidi Bidi refugee settlement, in northern Uganda, on June 9, 2017. (AP Photo/Ben Curtis)

Barely two weeks into his presidency, Biden signed a different executive order he said would “begin the hard work of restoring our refugee admissions program” and position his administration to raise the number of refugees allowed into the U.S. from 15,000 to 125,000 in its first full fiscal year, which begins in October. (By comparison, former President Barack Obama set that number at 110,000 his last year in office.)

Afterward, the president presented a plan to Congress that would raise the ceiling on refugee admissions to 62,500 people this fiscal year.

That’s a commitment Biden has framed in terms of faith, when, in the days after his election, he confirmed to a Catholic group that works with refugees his intent to raise the refugee ceiling.

In recent weeks, faith-based groups raised concerns that the Biden administration had not yet made any changes to the refugee policy it inherited from the previous administration. That delay meant canceled flights and expired medical clearances for hundreds of people waiting to come to the U.S.

“The effects have been felt by some of the most vulnerable people around the world with hundreds of refugee flights being cancelled and many being sent back to refugee camps. In order to truly strengthen the program and reach the eventual goal of resettling 125,000 refugees, the President must do better to restore U.S. leadership in refugee protection especially when we are facing the world’s worst refugee crisis since World War II,” Yang wrote.

Several officials with those groups said they were grateful for the changes Friday’s memorandum does make.

Among them was Krish O’Mara Vignarajah, president and CEO of Lutheran Immigration and Refugee Service, who said the memorandum will allow more refugees to come to the U.S. from African and Muslim-majority countries. The Trump administration had prioritized resettling Iraqis who worked with U.S. troops and others facing religious persecution.

“However,” Vignarajah said, “it is deeply disappointing that the administration has elected to leave in place the shameful, record-low admissions cap of its predecessor.”

She added, “Progress rarely comes in leaps and bounds; while we are encouraged by incremental progress towards restoring our humanitarian reputation, there is far more work ahead to reclaim global leadership.”

Mark Hetfield, president and CEO of Jewish refugee resettlement group HIAS, said he also was “relieved” by Biden’s decision this week to expedite some refugees and disappointed by his refusal to raise the refugee ceiling.

Hetfield argued that Biden has “decided to keep the handcuffs on that Trump gave him” and expressed bafflement that it has taken the president so long to act on the issue.

“Every person is created in the image of God, and for the administration to book 715 refugees on flights and then not allow them to come here because President Biden took two months to sign a piece of paper, it’s not respectful of human dignity,” he said. “You can only imagine how it made those refugees feel.”

Meredith Owen, director of policy and advocacy for Church World Service, said there is “no moral reason” to keep the refugee cap at 15,000, adding, “nor was there any morality in the significant delay in restoring regional allocations.”

“The harm caused by the delay cannot be overstated — thousands of refugees who were ready for travel to the United States last month have seen their medical and security checks start to expire. This means that they will have to wait months — if not years — to actually be resettled in the United States and reunited with loved ones,” she said.

Bill Canny, head of the U.S. Conference of Catholic Bishops’ Migration and Refugee Services office, also said he was “pleased” by some of the new measures but was more measured about initial reports that the cap would remain.

“We expected more than the cap that the previous administration put on,” he said. “We will continue to dialogue with and press the administration to increase that cap.”

The reason for its initial turnaround on raising the refugee ceiling remains unclear.

The New York Times cited an unnamed senior administration official as suggesting the shift was due to concern that an uptick in border crossings has already overwhelmed refugee services at the Department of Health and Human Services. But as the Times and faith-based immigrant rights advocates pointed out, the refugees in question are processed by a different system altogether.

One State Department official pointed out to The Associated Press that they have a lot to rebuild after cuts made by Trump to the U.S. refugee resettlement program.

All six faith-based refugee resettlement agencies were forced to close offices or programs across the country. Many staff members — some of whom came into the country as refugees themselves — lost their jobs.

On a call hosted last month by Refugee Council USA, its interim executive director, John Slocum, admitted, “There’s so much to be done.”

But, Slocum said, “We can do it at the same time. We can walk and chew gum.”