(RNS) — Ramadan is a blessing for the date farmers of Coachella Valley in the California desert. Traditionally the food Muslims turn to at the end of a day of fasting in the Islamic holy month, dates are also a major crop of the arid region on the edge of the Salton Sea, and each year the valley’s farmers see a sharp spike in sales during Ramadan and the preceding weeks.

This year for the first time, Joolies, one of the biggest date growers in Southern California, is appealing directly to Muslim Americans with a Ramadan-branded 2-pound box of fresh dates with a specially designed cover featuring a skyline of minarets and mosque-like domes for the holiday.

“In celebration of Ramadan, a sacred month of fasting, prayer and reflection for Muslims, we created this limited edition gift box,” Joolies’ website reads, recommending dates for Eid cookies as well as breaking the day’s fast.

Joolies also plans to give away some 15,000 dates to the Islamic Circle of North America Relief to be distributed to Muslim families in need during Ramadan this year.

“We are one of the first non-Muslim companies to develop consumer packaged goods specifically for the Muslim consumer in America,” says Joolies’ CEO Mark Masten. “We want to thank the community with a package of our finest dates that can be enjoyed around the Ramadan tradition of breaking fast with our beloved Medjool dates.”

The connection between Islam and dates goes back to the Prophet Muhammad, who is said to have recommended them  to break the Ramadan fast. The fruit is mentioned 23 times in the Quran. Dates are also mentioned in the Bible. 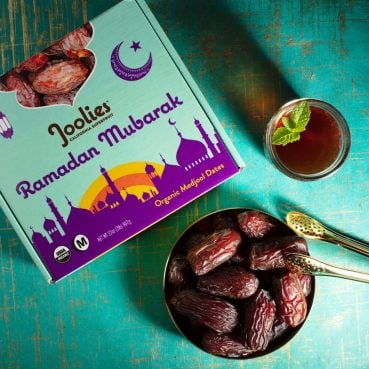 Dates have a lesser but still long history in the California, though it was Christians — Jesuit and Franciscan friars — who first introduced the crop into the gardens of their California missions in 1769. At the turn of the 20th century, a U.S. Department of Agriculture program introduced the Deglet Noor date varieties from Algeria, Iraq and Egypt to the Coachella Valley. The first commercial crop of Deglet Noor dates was produced in 1912.

The Medjool variety came to the valley in 1927 from Morocco. Following the commercial success of the 1921 film “The Sheik,” starring Rudolph Valentino, many date growers played up the Middle Eastern connection of their new crop. Day-trippers made pilgrimages to road-side stalls in towns with names like “Mecca” and “Oasis” to acquire the fruit.

Today the region produces more than 90% of the U.S. date crop and as much as 15% of all dates worldwide, with their fruit being shipped as far afield as Australia and the Middle East.

Date consumption was once closely associated with Christmas, when dates smeared with cream cheese or stuffed with nuts were a popular holiday confection. In the 19th century, dates wrapped in bacon, a recipe known as “devils on horseback,” emerged in Great Britain as a Christmas treat and soon spread to the United States.

But with the number of Muslims growing in the United States, dates sold at Ramadan have become a major focus of date growers’ business. A 2018 Pew Research Center study predicted that the American Muslim population, then estimated at 3.45 million, would reach more than 8 million, or 2.1% of the U.S., by 2050.

Already, Ramadan generates two to three times the normal volume of date growers’ sales. Muslims buy dates throughout the holy month for their own consumption and as gifts for others.

“We have had to work day and night to meet the Ramadan demand,” said Mark Tadros, the president of Aziz Farms, one of a handful of Arab American date farms in the valley.

Tadros’ father, a Coptic Christian, immigrated to the United States from Egypt and realized that the fresh dates he was used to were not available in his new home. He started out trucking packages of yellow Bahri dates to churches back in Los Angeles before branching out into farming and packaging the crop as well.

According to the 2017 U.S. agriculture census, date farming is still growing in the United States. In 2017 the census found 303 date farms, versus 213 five years earlier.

Yet date farmers say that increasing wages for farm workers and new regulations are putting the long-term future of Coachella’s crop at risk. Farmers worry a further rise in the minimum wage could be a fatal blow, as they depend on the human hand for the entire process of production, from pollination to packing the fruit in boxes.

“Dates are the most expensive crop to produce in the world, right up there with saffron,” Tadros said. “For this industry to survive we have to produce a high-quality product so consumers justify the cost.”

Tadros hopes to make dates a mainstream item of consumption and build a new generation of consumers and a new range of uses, particularly as companies and consumers are coming to see dates as a natural sweetener.

Indeed, the qualities that recommend dates as a healthy snack are the same ones that have made them the go-to way to break the Ramadan fast for centuries: They are rich in fiber to aid digestion, easy to consume and filling.