(RNS) — During his first year of rabbinical studies in Israel in 1982, Rabbi Ed Rosenthal went on a snorkeling trip. “I was overcome by the awe and wonder of the deep,” Rosenthal said. “It was as if I had entered an entirely new universe. I was hooked.”

Rosenthal admits he had been primed for his epiphany while growing up in landlocked St. Louis by watching endless reruns of “Sea Hunt” and “The Undersea World of Jacques Cousteau.” But from that day in Israel, he became an avid diver, eventually taking a job as executive director of the Suncoast Hillels, the campus Jewish organization, in Tampa Bay, Florida, where the diving, not coincidentally, is excellent.

But, seeing debris along his beloved ocean shoreline, Rosenthal realized that his spiritual mission was as much underwater, as it was on campus. In 2009 he formed “Scubi Jew,” an ocean restoration initiative that provides scuba certification courses to Eckerd College students and coordinates underwater cleanup activities.

Today, Scubi Jew has outposts at six college campuses across Florida and certifies 50 student divers, Jewish and non-Jewish, each year, and Rosenthal has founded a larger organization called Tikkun HaYam, which he says is the first Jewish marine conservation organization in the world. 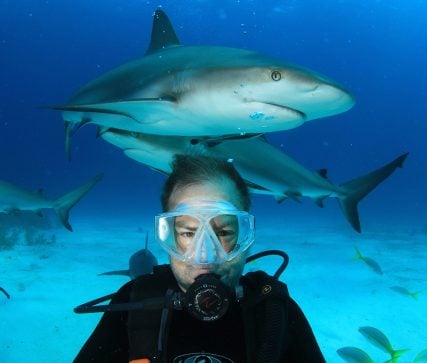 “Tikkun HaYam translates to ‘repair the seas,’ which is based on the Jewish tenet tikkum olam, which means ‘repair the world,’” he said. “When people think about climate change, they think about fossil fuels and life on land. But I strongly believe we have to look at the whole picture and that starts with the marine environment. Nothing exists without water.”

According to the National Ocean Service, the ocean, besides holding nearly 97% of the Earth’s water, generates more than half the planet’s supply of oxygen. It also regulates weather patterns and temperatures.

Yet, despite the economic dependence of 3 billion people globally on marine and coastal biodiversity, nearly 80% of ocean pollution originates with humans, primarily via agricultural runoff, plastics and untreated sewage.

“We treat the ocean like a garbage dump,” Rosenthal said. “I tell my students, if someone came into their synagogue and vandalized it — desecrating the altar, tearing up the Torah — we’d be in an uproar. If we respond like this to institutions and buildings, how much more should we respond to the desecration of God’s creation?”

In 2016, Tikkun HaYam launched its largest shore cleanup, called Reverse Tashlich, a play on the ceremonial casting of sins into the water performed on the first day of Rosh Hashana. For Tikkun HaYam, it means a chance to take things out of the sea.

“It changed the concept from ‘Let’s go clean some beaches’ to ‘Let’s clean the beach as a religious experience,’” Rosenthal said. “The first year, we had five students. Last year, about 850 volunteers cleaned up 48 waterfront locations in the U.S., Canada, Israel and Argentina and removed thousands of pounds of marine debris. Our goal this year is to double that number.”

Rosenthal is equally determined to stop plastic at its source before it reaches the ocean. After realizing Hillels were significant consumers of single-use plastics, he reached out to VerTerra, a company that produces compostable cutlery and plates. “When I told them my goal was to get every Hillel in North America off of single-use plastics, they gave us a 50% discount,” the rabbi recalled.

More than 53 Hillels have signed up so far, at a cost of only $200 a year more than they normally pay for plastic tableware, Rosenthal said, adding that the switch is equivalent to removing more than 183,000 pieces of single-use plastic from the ocean. VerTerra has offered to extend the discount to all religious organizations.

“If I can get every church, mosque and synagogue off of single-use plastics, I can die happy,” Rosenthal said. 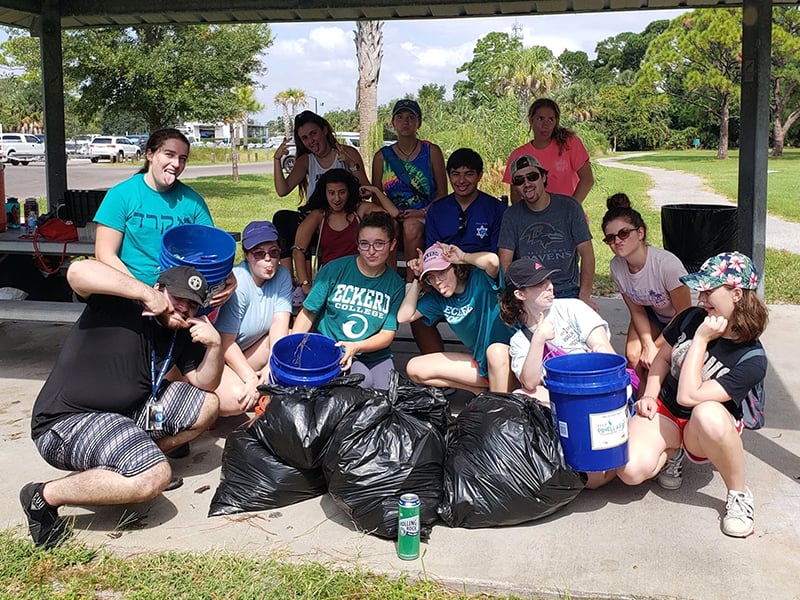 A group poses with their debris cleanup haul during a Reverse Tashlich event in Oct. 2019. Photo via RepairTheSea.org

Rosenthal hopes his efforts will change how people think about conservation. “When it comes to the marine environment, we think of science, not faith. But I like to quote Carl Sagan, who said, ‘The notion that science and spirituality are somehow mutually exclusive does a disservice to both.’ Science and spirituality need to work in tandem. That’s how we make a difference.”

But while the theology of ecology can go deep and Tikkun HaYam is a serious organization, Rosenthal realizes he has to pull people in with more immediate ideas.

A few months ago, Rosenthal and Josh Keller, a coordinator for Scubi Jew, devised the organization’s most creative recycling project yet: making mezuzot — the small boxes filled with Scripture that some Jews affix on their door frames — out of plastic waste. Two weeks after Keller and Rosenthal posted the mezuzot idea to Facebook, they had 95 orders.

While Keller got to work, grinding down plastic bottles to make filament for 3D printers, Rosenthal put out a call on social media, asking for donations. Before long, cars began to pull up in front of his house, filled with bags of plastic waste. “My garage is overwhelmed right now. The response has been fantastic,” Rosenthal said.

With the printing process taking four to five hours, Keller hopes to buy two more printers, which will enable him to make 14 to 15 mezuzot per day.

The mezuzot will join products such as ReJewsable bags on the Scubi Jews online store, which Keller is hoping will also soon sell manatees and sea turtles made from metal cans.

“People aren’t going to pay attention to Jewish marine conservation, so we had to find a hook to get their attention. The idea is to catch them with the names and then they’ll look deeper.” 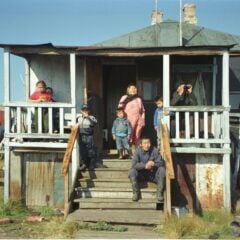