MUMBAI, India (RNS) — On Sunday night (April 25), with his 90-year-old father’s oxygen saturation levels dipping below 85, Kishor Kumar was frantic. Hospitals in India’s most populous city had been turning him away, saying they had no oxygen beds.

Finally, at 9:30 p.m., following a lead, Kumar showed up at a Sikh gurdwara in Airoli, just outside Mumbai, where volunteers from the nonprofit Hemkunt Foundation were arranging for COVID-19 victims to have oxygen cylinders to take home.

“They were so helpful. They told me, ‘Don’t worry, keep it as long as you want,’” said Kumar. “It was a miracle for us.” Kumar’s father stabilized over the next few days at home and has now tested negative for COVID-19.

“In this phase (of the pandemic), oxygen is a big problem,” said Simranjeet Singh, a Hemkunt Foundation leader. “The gurdwaras are closed, but they have given us rooms where we can operate from.”

In the grip of a deadly second wave of COVID-19, religious charities and faith-based organizations are among the many civil society groups that have stepped up to mobilize relief efforts. Besides lending out their premises for hospitals or quarantine centers, the religious volunteers deliver food, medicine and other vital supplies to those recovering at home.

For Sikhs such as Singh, who consider service a core tenet of their faith, the donated sacred space gives him an opportunity to practice his beliefs. “We need a place to serve people,” said Singh.

India first crossed 300,000 new infections on April 22, breaking the one-day record for cases set by the United States in January. In April alone, the country has recorded more than 5 million new cases, with some experts saying that deaths and infections are being undercounted.

Local and national authorities have been struggling to respond to the calls for beds, drugs and medical supplies. Prime Minister Narendra Modi’s government has faced flak for its mishandling of the crisis, including its recent decision to give a go-ahead for the Kumbh Mela, a monthlong religious event in Haridwar in north India that attracts millions. (The prime minister later called on devotees to celebrate symbolically.) 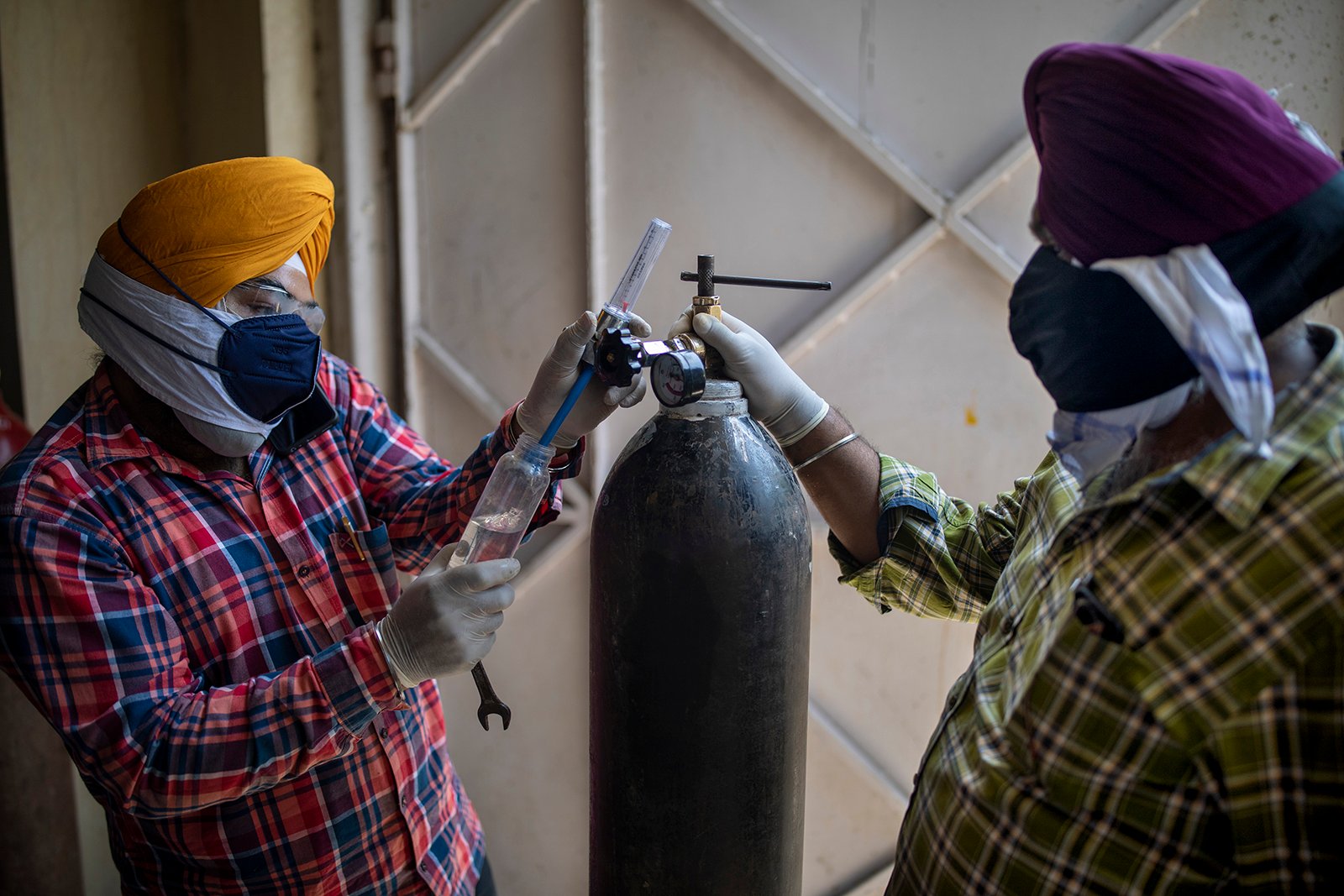 Volunteers from a gurdwara, a Sikh house of worship, prepare oxygen cylinders for patients in New Delhi on April 24, 2021. India’s medical oxygen shortage has become so dire that this gurdwara began offering free breathing sessions with shared tanks to COVID-19 patients waiting for a hospital bed. (AP Photo/Altaf Qadri)

“Social service is our duty. We have to come forward,” said Manjinder Singh Sirsa, president of the Delhi Sikh Gurdwara Management Committee. “At times like this people look towards religious bodies.” Gurdwaras in Delhi have been home delivering two meals a day for more than 4,000 patients, have provided rations to poor families and have also offered their guest houses to be used as hospital facilities.

Religion is integral to daily life in this country of 1.2 billion, 80% of whom are Hindu, with large minority populations of Christians, Muslims, Sikhs and Jains. “This is an unprecedented crisis and the state has to take the lead, but individuals, civil society and religious groups can all play a role,” said Anant Bhan, a researcher in global health, bioethics and health policy. “Whether in addressing misinformation, sourcing supplies or leveraging community strength. The health system is struggling and certainly needs help.”

Not all religious leaders, who have enormous influence, have behaved responsibly during the pandemic, with several large faith gatherings last year resulting in infection clusters.

But local houses of worship have stepped up to meet burgeoning needs. “Our gurudev inspired us that right now is not the time to go to the temple and pray to God; right now is time to support people. That would be your real prayers,” said Parag Shah, a volunteer with the Arham Yuva Seva, a Jain volunteer organization that has turned community centers and temples into hospitals in Mumbai and in Gujarat, 400 miles to the north.

“This is the time for people to step up and give whatever resources they have, premises or money or a helping hand,” said Shah.

In Ghaziabad, outside Delhi, the local gurdwara has arranged an “oxygen langar” — using the Hindi word for a free food kitchen — where patients can drive in and be placed on oxygen support until they stabilize or find a hospital bed. 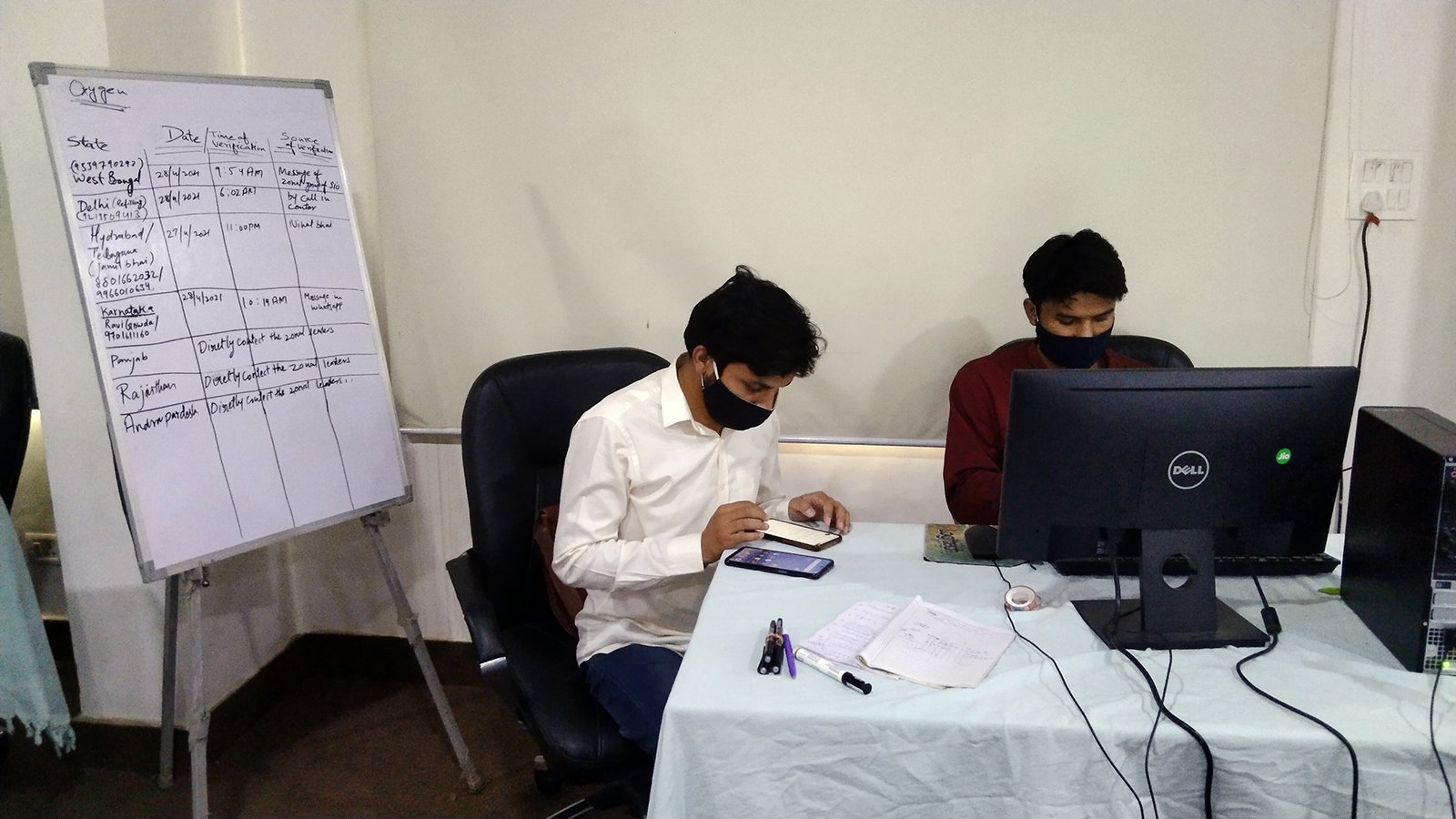 In Puri, the trust running the Jagannatha Temple has turned one of its properties into a COVID-19 care center. In Delhi, the Students Islamic Organization of India is operating a 24-hour help line to connect patients across India with verified resources such as oxygen and plasma.

In and around Mumbai, the nonprofit Red Crescent Society of India has with the help of mosques been booking, storing and refilling oxygen cylinders. With mosques scattered across the city, and with large premises to spare, this has been ideal.

“With mosques shut for prayers, the authorities quickly came forward to support us,” said Dr. Azimuddin Sayed, secretary of the nonprofit. “What better use could there be for such spaces than to serve humanity?”

He added, “This is happening from the masjids, but we are working for all human beings.”

All of these groups said they were helping people from all religious backgrounds. “All of (our centers) are open for patients, human patients, we don’t have any bar for religion, caste, creed, gender,” said Shah.

Experts predict the active COVID-19 cases will peak in mid-May, but these faith organizations have no time limit in mind. Sirsa said they were willing to pitch in an “unlimited” period.

“We are seriously hoping it isn’t open too long and corona(virus) goes away,” said Shah, but “we are happy to support the community for as long as required.”