(RNS) — “I don’t get it. My husband and I have been in couples counseling for nine years already, but life at home is getting worse,” says a woman to her clergyperson, her fingers fidgeting with her phone.

“First, the constant sarcasm, then the silent treatment and not knowing what’s really going on with our finances. When he was furloughed last spring, he started throwing things, and one time he started to choke me … ” her voice trails off. “He’s been swearing at the children, too, and smacked the dog on its head, hard, the other day, out of the blue. I don’t know what to do,” she whispers.

Do most clergy know what to tell this woman? Maybe they remember a seminary lecture in which they heard that a couple such as this one shouldn’t be in marriage counseling. Do they suggest the couple stop seeing a therapist together? Maybe they feel the need to hear her partner’s version.

What if the woman’s spouse has recently offered to rig the campus with much-needed technology? What if the congregational leader’s own exhaustion makes them quail at taking on another complicated pastoral situation?

As a congregational rabbi and 12-year member of Jewish Women International’s Clergy Task Force to End Domestic Abuse in the Jewish Community, I know I’m not alone in wanting a smarter way to support families suffering from abuse. The pandemic has spurred greater awareness of risk factors for domestic violence and new thinking about intimate partner violence. Our understanding has become more comprehensive and well-coordinated, more survivor-oriented, more trauma-informed.

That new thinking is amply evident in a report recently released by Jewish Women International titled “Domestic Violence in the Jewish Community,” and based on a yearlong needs assessment of services for survivors within the Jewish community. It offers recommendations that do not shoehorn the needs of survivors into systems that have not been serving them well — civil and criminal justice systems, child welfare systems, government benefits systems, and economic and employment systems.

Ready or not, clergy are likely to be sought out more frequently by those intent on leaving homes beset by quarantine and quarreling.

While the report addresses questions particularly facing Jewish communities, many of them are relevant to other faith communities.

For instance, if a victim does decide to leave her abuser, can you as clergy help her to stay in the community? What would a trauma-informed response to her suffering look like, such that you do not inadvertently misdirect her into re-traumatizing experiences?

What if she and her children need transitional shelter? Could you recommend, based on firsthand knowledge, where to go? Are you prepared to talk about safety planning? Able to help her name which of the four “stages of change” that those in hurtful or unhealthy situations tend to move through on the way to safety and stability? (The report describes the role of clergy in all four stages: pre-contemplation, contemplation, action, long-term healing and independence.)

Are there resources at hand to offer immediate spiritual nourishment to someone feeling both trapped and full of self-blame for her entrapment? Come to think of it, ever since you heard from the preschool teacher that this congregant’s daughter recently slapped another student to the ground, you’ve noticed a pronounced tic in the daughter’s eye. If she acts out again, what advice will you give her teacher?

This report is meant to jump-start discussions that will lead to culturally specific interventions and robust, innovative partnerships — between clergy and local shelters and between seminaries and local clergy on the front lines, as well as collaborations with real estate investors who could provide long-term housing solutions for those fleeing domestic violence.

Clearly, new thinking about the needs of survivors and new resources to help them are already here. If we clergy are the people with more authority than power, now is the time to lean on that authority to help relocate the very definition of support for the families we serve.

(Rabbi Donna Kirshbaum, who serves Bethlehem Hebrew Congregation in New Hampshire, is chair of the communications committee for Jewish Women International’s Clergy Task Force to End Domestic Abuse in the Jewish Community. The views expressed in this commentary do not necessarily reflect those of Religion News Service.) 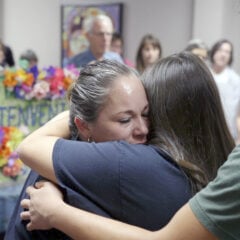