(RNS) — The third Friday in May is celebrated as Malcolm X Day, but many choose to recognize the civil rights leader today (May 19), on his birthday. Either way, the Malcolm we honor — his towering frame, his articulate baritone, his piercing gaze — reflects the pride that so many of us take in the man. But this image often lends itself to a shallow, constrained memory of Malcolm, which at once burns intensely in depth yet narrowly in breadth.

In life, and in the mainstream public’s memory, Malcolm was sidelined as the quintessential angry Black rebel: a figure who was novel for the intensity of his passion, but who had nothing to teach society at large.

That dismissal of Malcolm’s legacy does not just do disfavor to the man himself, but to all of us. Malcolm reminds us of two historical constants: first, that every era requires people who can fearlessly speak truth to power; and second, that those who do so will inevitably be sidelined during their time.

It was Malcolm who warned us in his lifetime about the damage being done to the Palestinians, before any other African American leader or civil rights organization, just as he would take on the Vietnam War before anyone else would. He would be the lone popular leader to support Yuri Kochiyama in her quest for justice after the nuclear bombings of Hiroshima and Nagasaki.

Moral courage is not often found within the confines of our rigid partisan establishment lines. Neither political party has a monopoly on morality. Courage is displayed precisely when we rise up against the comfortable, prevailing view of our times.

There are few places in American politics today where this courage is required more, and yet present less, than on the issue of Palestinian human rights.

The banality of the injustice against the Palestinians has allowed it to occur steadily and quietly over years. Israel continues to build settlements in occupied Palestinian territories in flagrant violation of nearly every international law. Moving the U.S. Embassy to Israel to Jerusalem in 2018 was dismissed as a political stunt by then-President Donald Trump and Israeli Prime Minister Benjamin Netanyahu, though it proved to be a usefully provocative one for both politicians. Gaza has become an open-air prison that is routinely bombed to pieces. This has become the status quo, one that President Joe Biden has thus far only cemented further.

Even outrageous attempts to expel Palestinians from their homes in the Sheikh Jarrah neighborhood of Jerusalem only gained global attention because Israel made the mistake of allowing a historic mosque to be the backdrop of Palestinian protests.

But now here we are again: Al-Aqsa, one of the holiest sights of Islam, being desecrated on one of the holiest nights of Ramadan; Israeli lynch mobs attacking Palestinian “citizens” with police protection; settlers forcibly displacing Palestinians from their historic homes. The bombardment of Gaza has already left more than 60 children dead and the one COVID-19 testing center destroyed. 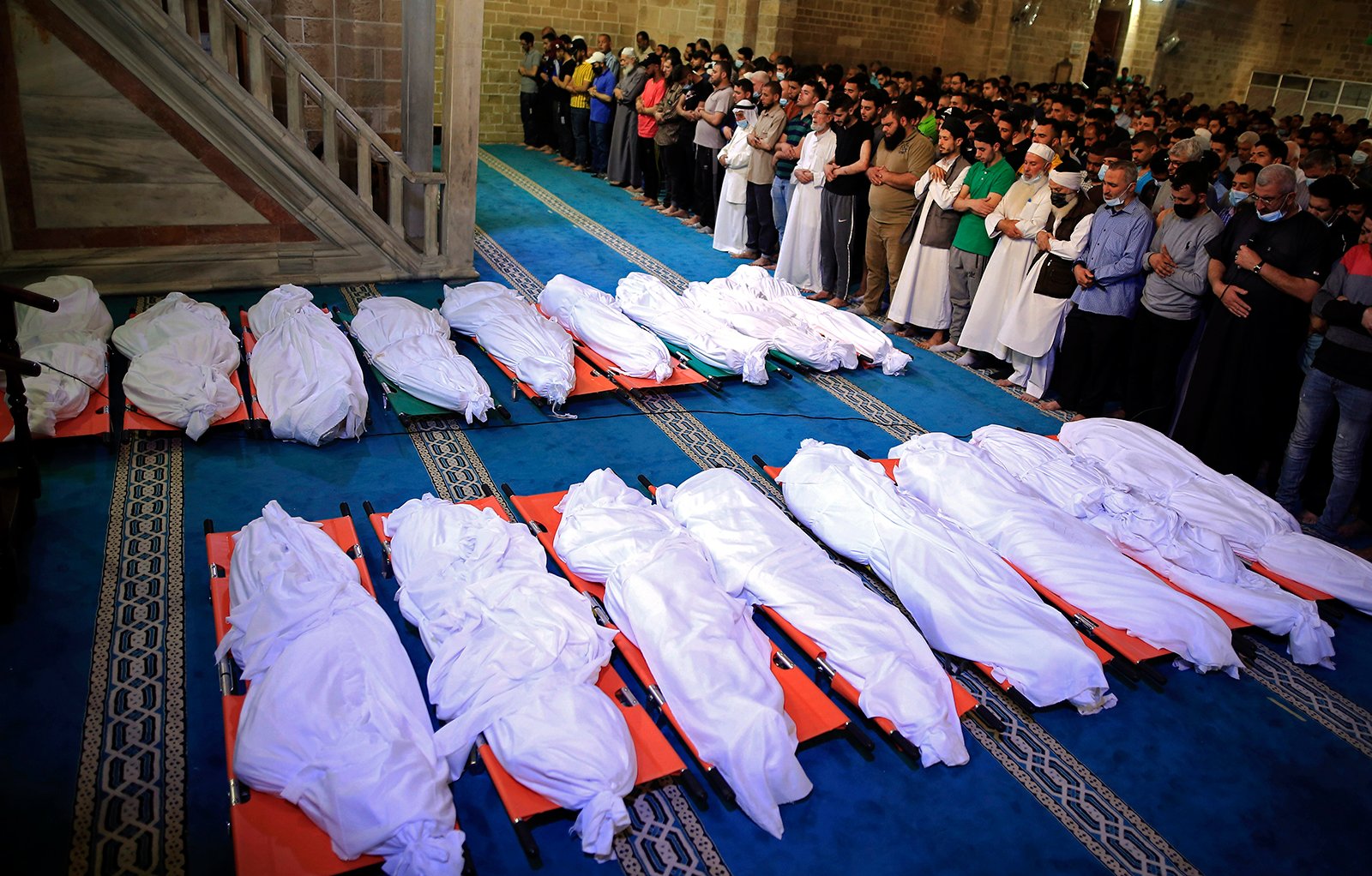 Mourners pray over the bodies of 17 Palestinians who were killed in overnight Israeli airstrikes in Gaza City, May 16, 2021. (AP Photo/Sanad Latifa)

Still, the two political parties in the U.S. Congress, who can otherwise barely agree to keep the government running, annually secure unconditional funding for Israel and punish any activity that challenges it. For years, any political avenues to supporting Palestinian activism have been cut off.

But Palestinian activism in this country will succeed. Already we see the pendulum swinging, as it inevitably must.

Despite the brutality of the Israeli military and intimidation of activists in the U.S., internal protests and acts of civil disobedience keep spreading. Despite the consequences to celebrities and athletes who dare voice their opinions, more of them are speaking out and not deleting their tweets under pressure.

Despite the shadowy watchlists kept to punish pro-Palestinian activists by making it difficult for them to find employment, more activists have decided those salaries aren’t worth their conscience. And a handful of political figures are forcing us to reopen the conversation about what moral courage looks like.

On the floor of Congress recently, Rep. Cori Bush said: “We are anti-war. We are anti-occupation. And we are anti-apartheid. Period.”

Moral consistency cannot, of course, just be limited to Palestine. It’s sorely needed in every facet of our political life. But speaking out on Palestine can be the first crack in ensuring that all walls, literal and metaphorical, begin to fall.