WASHINGTON (RNS) — After days of violence that took the lives of at least a dozen people in Israel and hundreds in the occupied Palestinian territories, officials in both regions finally agreed to a cease-fire that took effect on Friday (May 21).

President Joe Biden, who had publicly urged Israeli Prime Minister Benjamin Netanyahu to negotiate an end to hostilities following pressure from liberal Democrats, called on the Almighty as he announced the cease-fire on Thursday.

“May God bless you all,” Biden said. “I pray that this continues.”

Religious references are common when discussing places such as Jerusalem, a city of profound religious significance to three major world faiths — Judaism, Christianity and Islam.

But as an uneasy peace returns to the region, debate about the conflict continues to rage here in the U.S. — including among religious communities. Activists say the conversation looks different than in years past, with robust support for Palestinians and criticism of the Biden administration cropping up across the faith spectrum.

A recent Pew survey shows a broad range of opinions even among U.S. Jews regarding the Israeli government. Only 33% of Jewish Americans overall think the country’s leadership is making a sincere effort toward a peace settlement, although an even smaller percentage — 12% — think Palestinian leadership is doing the same. Pew researchers also cited rabbis who told them their synagogues include more critics of the Israeli government than in previous years, and roughly 40% of Jews of no religion said the U.S. is too supportive of Israel (only 16% of religious Jews said the same).

Rabbi Jill Jacobs said she, too, has seen Jewish voices critical of Israel grow louder. She would know: Her organization, T’ruah, mobilizes rabbis for liberal-leaning activism — including actions critical of Israel. Among their projects: speaking out against the expulsions of Palestinians in East Jerusalem. 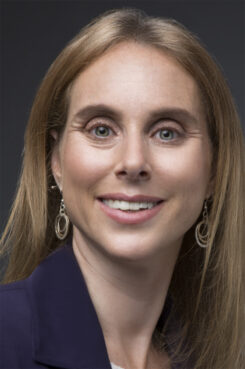 Jacobs said people sometimes label her group’s positions as to the left of the broader discourse regarding Israel and the occupied Palestinian territories. But the recent flare-up in violence put her and T’ruah in the uncomfortable position of navigating a fluctuating middle ground.

“In the last 10 days, our constant message has been calling for a cease-fire and also being out there as a moral voice saying that attacks on civilians are a war crime,” she said. “Israel’s bombings of civilians and Hamas’ rockets are both war crimes.”

She notes rabbis from her group organized a vigil outside the Israeli embassy on Sunday, May 16, but that engaging online discourse around the conflict can be tricky. She bemoaned Jewish voices that gave carte blanche to Israel’s military actions, or pro-Palestinian voices that called for an abolishment of Israel. Instead, she hoped to speak for “members of the Jewish community who are trying to square commitment to the human rights of Palestinians with Israel and Israelis — there is a voice that says you can have both.”

Vermont Sen. Bernie Sanders, who is Jewish, has been one of the harshest critics of Israel in the Senate, accusing Netanyahu in a recent New York Times editorial of “racist nationalism” and introducing a resolution calling for a cease-fire between the Israel Defense Forces and Hamas.

Criticism of Israel has been harder to find among white evangelicals, where support for the country remains robust. In that same Pew survey, 67% of white evangelicals, which greatly outnumber American Jews, said U.S. support for Israel is “about right” — the highest of any faith group — and an additional 20% said the U.S. isn’t supportive enough. In a recent interview with Israeli journalist Amit Segal, Ron Dermer, who served as Israeli Ambassador to the United States from 2013 to 2021, declared, “The backbone of Israel’s support in the United States is the evangelical Christians.”

Sen. Ted Cruz, an evangelical Christian from Texas, led a group of Republican senators in criticizing Biden on Wednesday for not doing enough to help Israel. He accused the president of lacking “backbone” and called on him to replenish munitions for the Iron Dome technology that protects Israel from rocket attacks.

Linda Sarsour, a prominent Palestinian American activist, said the response among her fellow Muslim Americans has been wildly different.

“The frustration and the disappointment is that someone has power literally over people’s lives and just is deciding not to use it,” she said of Biden. “(This is) in line with the longstanding, unjust and disproportionate relationship that we’ve had with the state of Israel at the expense of the Palestinian people.” 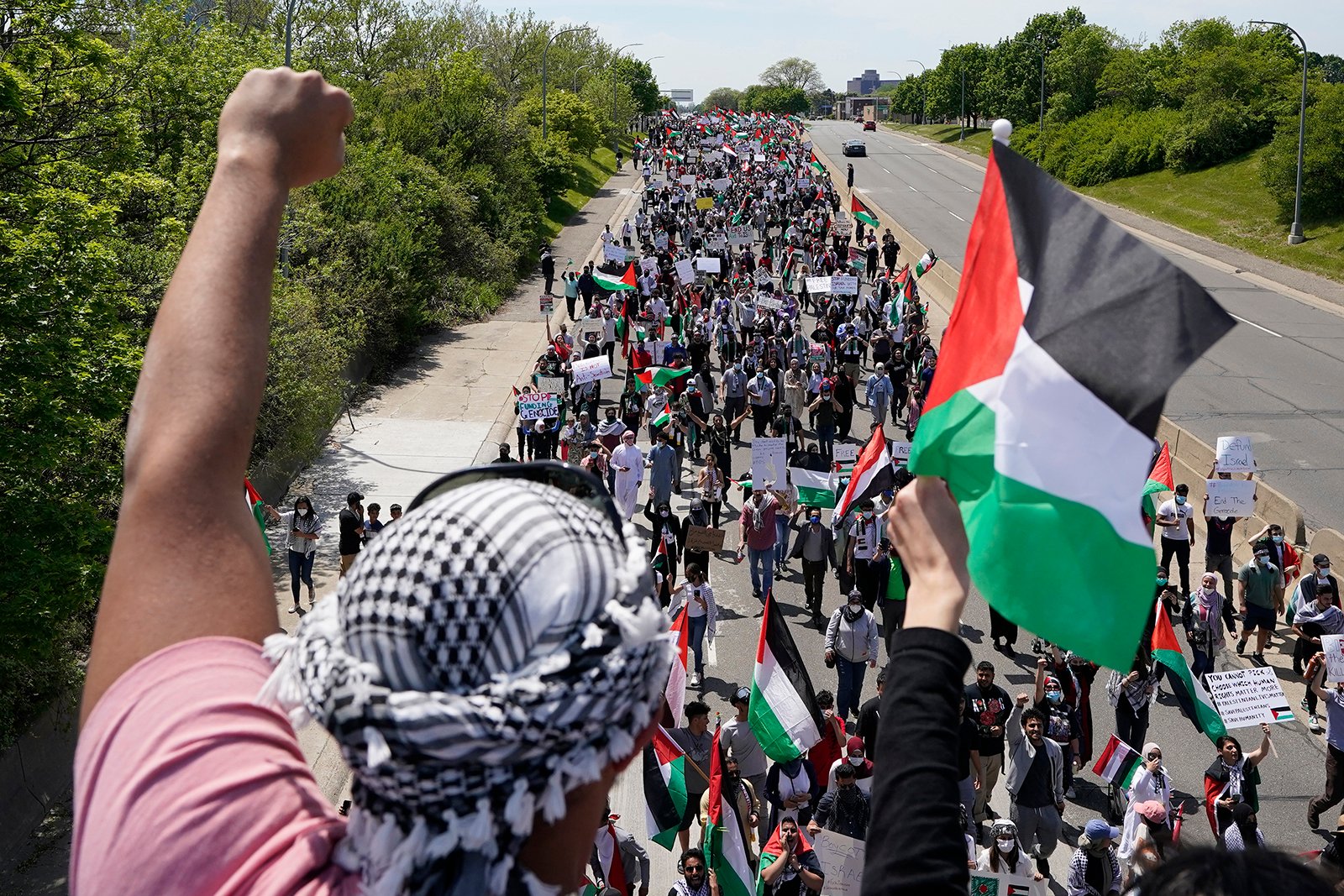 Protesters supporting Palestinians walk down Michigan Ave., as President Joe Biden visits a Ford electric vehicle center nearby, Tuesday, May 18, 2021, in Dearborn, Mich. Biden’s efforts to spotlight his big infrastructure plans are suddenly being overshadowed by the escalating violence between Israel and the Palestinians. (AP Photo/Carlos Osorio)

When Biden visited an auto factory in Dearborn, Michigan, earlier this week, he was greeted by protests featuring the region’s sizable Muslim American community. According to the Detroit Free Press, thousands marched in the streets, some waving Palestinian flags and blasting the president for not doing enough to end the conflict in the Middle East.

As Biden left, he was confronted on the tarmac by Michigan Democrat Rep. Rashida Tlaib. The congresswoman, a Muslim American and child of Palestinian immigrants, reportedly conveyed to the president that “Palestinian human rights are not bargaining chips.”

Sarsour pointed to the emergence of prominent Muslim American activists in liberal circles during former President Donald Trump’s tenure, such as when thousands of Americans flocked to airports in 2017 to decry a travel ban that activists often described as a “Muslim ban.” And while she and other leaders of the original 2017 Women’s March were eventually mired in controversy that reportedly involved debates regarding antisemitism as well as how to articulate criticism of Israel, her visible role with the group nonetheless raised the profile of the Palestinian cause. 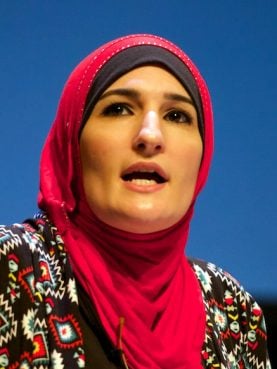 “(That) allowed me to bring my identity to a very large stage, where people met a Palestinian for the first time in their lives,” she said.

She added: “What members of Congress need to know around the country is that if you weren’t clear about your position on — or opposed — the disproportionate or indiscriminate killing of Palestinians in the West Bank or Gaza, you’re getting a challenger in 2022, for sure.”

According to Sarsour, as violence continued to flare in the Middle East, a group of interfaith leaders affiliated with Auburn Seminary convened a call where participants asked how they could express solidarity with Palestinians, with Black faith leaders expressing particular urgency.

In addition, a group of clergy affiliated with the group Faith for Black Lives sent a public letter to Biden earlier this week criticizing his response to conflict in the Middle East. Signers included prominent Black pastors such as the Rev. Otis Moss III, the pastor of Trinity United Church of Christ in Chicago who also participated in the interfaith prayer service celebrating Biden’s inauguration.

The letter called on Biden to halt the sale of $735 million in weapons in Israel and for a cease-fire.

“As a person of faith, we want to remind you of these words from Jesus, a Palestinian Jew, in Matthew 5:9, ‘Blessed are the peacemakers,’” the letter read. “Mr. President, it is clear that our struggle for Black liberation is tied to the struggle for Palestinian liberation as we seek to be peacemakers and bring an end to the triple evils of society, poverty, militarism, and racism.”

The Rev. Stephen A. Green, chair of Faith for Black Lives and author of the letter, said it garnered a response from the White House Office of Faith-based and Neighborhood Partnerships, who suggested they would share it with administration officials. The White House did not immediately respond to a request to confirm Green’s account.

“We penned this letter because we recognize the Palestinian oppression and Black oppression that we’re experiencing in the United States are tied together,” Green said. “The oppression of apartheid they experience in Palestine under Israeli occupation is very similar to what we’ve experienced in the United States as it relates to police brutality, to voter suppression, as well as to housing and economic inequities. So we see commonality in our struggle.” 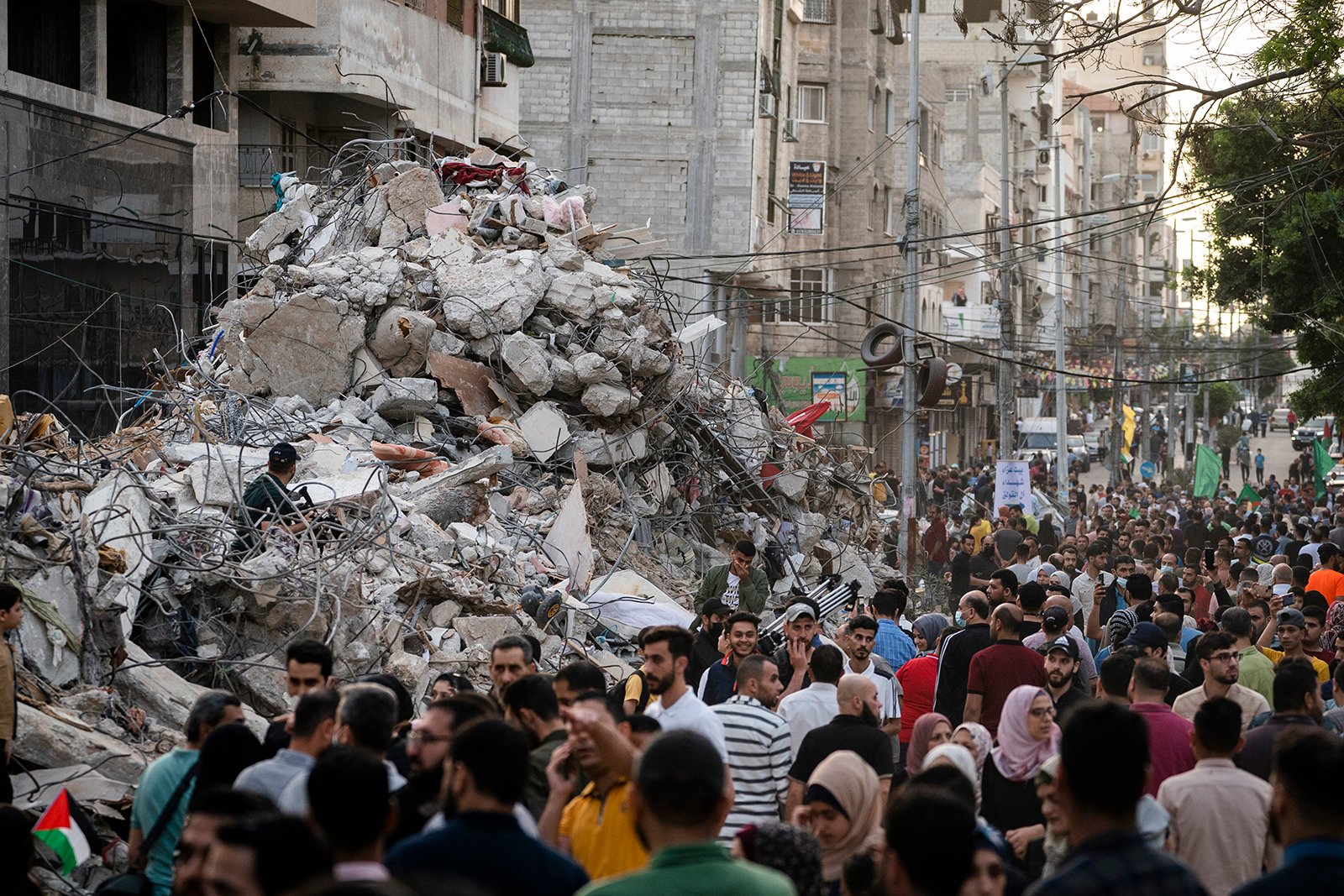 People pass a rubble heap beside a building previously destroyed by an Israeli airstrike, following a cease-fire reached after an 11-day war between Gaza’s Hamas rulers and Israel, in Gaza City, Friday, May 21, 2021. (AP Photo/John Minchillo)

The pastor said racial justice advocates in the U.S. have expressed solidarity with Palestinians in the past — including during the civil rights movement — but more recent movements explain growing support for the Palestinian cause among Black pastors.

“It was after the (killing of) Michael Brown when we saw the military occupation — the police occupation in Ferguson — really expose what folks are living through in Gaza and in the West Bank,” he said.

Sarsour said Palestinian activists offered their support to racial justice activists in Ferguson back in 2014, giving tips for how to respond to police violence or treat eyes burned by tear gas.

One of those Palestinian activists was mentioned by name last week on the floor of the House of Representatives. On May 13, Rep. Cori Bush of Missouri, who became a lawmaker after serving as a pastor and racial justice activist, told the story of Bassem Masri, a Palestinian man from St. Louis who participated in the Ferguson demonstrations.

“Bassem was one of us,” Bush said. “Palestinians know what state violence, militarized policing and occupation of their communities look like.”

She closed by reciting a quote she attributed to Masri: “Until all our children are safe, we will continue to fight for our rights in Palestine and in Ferguson.”