WASHINGTON (RNS) — Dozens of faith leaders participated in a virtual edition of the interfaith National Prayer Service hosted by the Washington National Cathedral on Thursday (Jan. 21), gathering digitally for a service that articulated a spiritual endorsement of diversity, healing and “repairing the breach.”

As both President Joe Biden and Vice President Kamala Harris watched with their families from the White House, the Very Rev. Randolph Hollerith, dean of the cathedral, and Bishop Mariann Budde, the Episcopal bishop of Washington, opened the service.

Budde said the gathering, a long-standing inaugural tradition, was meant to be “reflective of the many faith traditions of our land.”

Indeed, what followed was a 90-minute service that featured a dizzying array of mostly liberal-leaning faith leaders from across the religious spectrum, many of whom were some of former President Donald Trump’s most passionate religious critics.

They acknowledged the profound challenges facing the country, as well as the harm wrought by the deaths of more than 400,000 Americans to COVID-19.

“We stand before you in this moment full of pain, and full of promise,” said Rabbi Sharon Brous, head of the IKAR community in California. “In the midst of pandemic, in the shadow of violent insurrection, we lift up the ancient Jewish promise that after the long night of suffering, a redemptive dawn will come.”

The prayers were interspersed with musical performances from artists such as Patti LaBelle, who sang the national anthem; Josh Groban, who sang “America the Beautiful”; and The Clark Sisters, who sang “Blessed and Highly Favored.” Several faith leaders prayed for Biden and Harris in particular, but a few made a point of praying for others in government. The Rev. Otis Moss III, senior pastor of Trinity United Church of Christ in Chicago, spoke of the Supreme Court, urging God to “Fill their deliberations with insight and their judgments with integrity.”

Similarly, Sister Carol Keehan, a Catholic nun and former head of the Catholic Health Association, who played a key role in urging Congress to pass the Affordable Care Act, lifted up lawmakers on Capitol Hill in prayer.

“Guide and bless senators and members of the House of Representatives, so that they may enact laws for the common good and the protection of the most vulnerable,” she said.

Still others, such as Sikh activist Valarie Kaur, prayed for health care workers and first responders, and Imam Azhar Subedar of the Islamic Association of Collin County, Plano, Texas, echoed the theme of Biden’s inauguration: unity.

RELATED: For President Joe Biden, an inauguration filled with faith

“From distant lands and an array of cultures, it is not the color of our skin or the languages we speak, or even the way we live or the faith and belief we ascribe to,” Subedar said. “Rather, the common ground that unites us all and makes us one and all here in this nation of ours, is our pledge to our flag and our promise to uphold our Constitution.”

But the service did not cast unity as easily achieved. The central preacher, activist and North Carolina pastor the Rev. William Barber II, rooted his sermon in Isaiah 58, which calls on devotees to aid society by being a “repairer of the breach.”

“The breach, according to the imagery of Isaiah, is when there is a gap in the nation between what is and how God wants things to be,” said Barber, co-chair of the Poor People’s Campaign. “Transposed to our time, the breach is when we say ‘One nation under God, indivisible with liberty and justice, for all’ with our lips, while we see the rich and the poor living in two very different Americas. The breach would be knowing the only way to ensure domestic tranquility is to establish justice. It is pretending that we can address the nation’s wounds with simplistic calls for unity.” He added: “Every now and then a nation needs bridge repairs to take us forward.”

Barber then spoke directly to Biden and Harris, noting they can pull from the “breaches” they have experienced in their own lives. The president, he said, has endured ”economic struggle in your childhood and the breach of a broken heart,” and the vice president knows “the political and social breach caused by racism.”

“Both of you know that the only way forward is for the breaches to be repaired,” he continued. “This moment in our union is not about left and right or centrists. It should not be about Republicans and Democrats. Even what we saw happen at the Capitol two weeks ago is the result of a long history of politics of division that was cynically named ‘positive polarization,’ by those who thought they could use it for their own political advantage.”

As his homily drew to a close, Barber called for a “third reconstruction” and named “interlocking injustices” he believes Biden, Harris and those who work with them should address: systemic racism, poverty, ecological devastation, denial of health care, the war economy and the “false distorted moral narrative of religious nationalism.”

The litany will sound familiar to those who follow Barber’s work with the Poor People’s Campaign, an effort to reclaim the final project of Martin Luther King Jr. Barber’s list builds on and expands what King once called America’s “three evils” — racism, poverty and war.

“Repairing the breaches will bring revival,” he said. “If you get rid of unfair practices, the prophet says, if you are generous with the hungry, if you start giving yourselves to the down and out, then you’ll be known as repairers of the breach.“

The sermon was a return to tradition after 2017, when the service omitted a central preacher. The cathedral was criticized at the time by several faith leaders, including religion scholar Diana Butler Bass and former cathedral dean the Rev. Gary Hall, for holding the service for Donald Trump, whose rhetoric and agenda, they argued, were antithetical to Christian values. 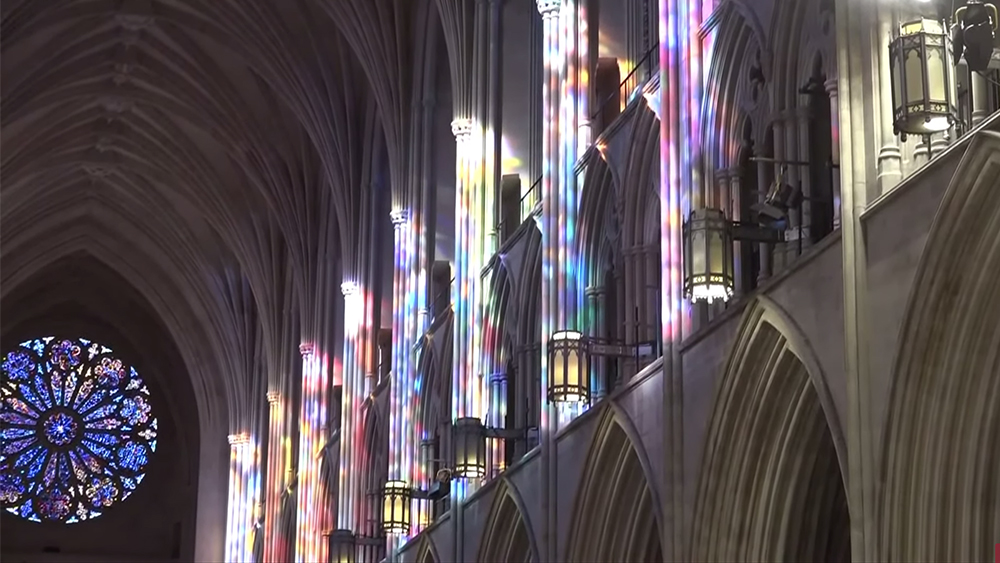 The 2017 service featured several evangelical Christian speakers who became Trump’s religious allies over the course of his tenure, such as the Rev. Ronnie Floyd, pastor of Cross Church in Arkansas; the Rev. Greg Laurie, pastor of Harvest Christian Fellowship, Riverside and Irvine, California; the Rev. Jack Graham, pastor of Prestonwood Baptist Church in Texas; and Cissie Graham Lynch of Samaritan’s Purse, among others.

This year, however, conservative voices and controversy appeared to be largely eclipsed by enthusiasm from liberal religious circles. Human Rights Campaign, an LGBTQ advocacy organization, issued a statement lauding the event as the “most LGBTQ inclusive Inaugural Prayer Service in U.S. history,” pointing to the participation of “trailblazing” LGBTQ faith leaders such as Rabbi Sharon Kleinbaum of Congregation Beit Simchat Torah and transgender speakers such as the Rev. Paula Stone Williams.

Many of those in the service — including Barber — participated in public protests against Trump and his policies over the past four years, and some endured arrests or public blowback for their activism. Arguably the most prominent evangelical representative wasn’t a pastor but Jen Hatmaker, a popular author and speaker who received death threats in 2016 after she denounced Trump and voiced support for same-sex relationships in an interview with Religion News Service.

“Bless our land with honest industry and an honorable way of life,” Hatmaker prayed during the service. “Save us from violence, discord and confusion. From pride, and arrogance, and from every evil away. Make us who come from many nations, and many languages, a united people.”

Michael Curry, the presiding bishop of the Episcopal Church who once teamed up with fellow prayer service participant the Rev. Jim Wallis to denounce Trump’s “America First” slogan as a “theological heresy,” offered the final blessing.

“Go forth into the world in peace,” he said. “Be strong and of good courage. Hold fast to that which is good, render to no one evil for evil, love the Lord your God, love your neighbor, love yourself. God love you, God bless, and may God hold us all in those almighty hands of love.”