(RNS) Best-selling author and HGTV star Jen Hatmaker says her first political memory is of being at a church service and finding a voters guide in her bulletin. The pamphlet did not strike her as odd or off-putting, despite encouraging congregants to “vote straight-ticket Republican.” As she says: “The way it had always been explained to me was the Republican platform is Christian. The end.”

But much has changed since Hatmaker’s childhood in blue-collar suburban Wichita, Kan. The evangelical movement in which she was raised has become more politically diverse and less willing to overtly align with one party. And Hatmaker has changed, too. She has voiced strong political opinions on her Facebook page and took time during her multi-city Belong Tour to criticize Donald Trump.

Here, we discuss her political views, and Hatmaker does not hold back. The interview was edited for length and clarity.

You said you grew up in a Republican Christian context, but what about today? Do you consider yourself a conservative or a liberal?

Speaking of voting, you’ve been critical of Donald Trump. What is it about him that bothers you as a Christian woman?

As a believer, I’m devastated at how successful he has been in pandering to our lowest, basest selves. The selves that are willing to be openly racist. The selves that are afraid of anybody that does not fit our demographic. The selves that close our arms and our hearts to victims and vulnerable people. He has exposed the darkest corners of our human hearts and then given them free rein to live out in the open. That scares me.

Then, of course, there’s all the low-hanging fruit that we find in the media almost every other second. His history with women and his disturbing comments. They’re not just unpresidential, they’re disgraceful. They’re disgraceful for my seventh-grader. These are not OK.

Who do you plan to vote for?

My initial thought is vote for whoever is not Donald Trump and can win. It’s interesting, though, to watch Evan McMullin rise up right now as a conservative candidate, and I’m paying attention to that. I like him. I think he’s got a lot of integrity, and I like his policies.

What about Hillary? Would you be open to voting for her?

But Hillary has her share of problems too, right?

That to me is where the Christian family is struggling right now, because in terms of character assassination, both of our candidates have some dirt. It has become a matter of which is worse, and it’s a terrible predicament.

From a civil rights and civil liberties side and from just a human being side, any two adults have the right to choose who they want to love. And they should be afforded the same legal protections as any of us. I would never wish anything less for my gay friends.

From a spiritual perspective, since gay marriage is legal in all 50 states, our communities have plenty of gay couples who, just like the rest of us, need marriage support and parenting help and Christian community. They are either going to find those resources in the church or they are not.

Not only are these our neighbors and friends, but they are brothers and sisters in Christ. They are adopted into the same family as the rest of us, and the church hasn’t treated the LGBT community like family. We have to do better.

RELATED: On LGBT issues, how can Christians disagree in a loving way?

If an LGBT friend of yours got married, would you attend that wedding?

I would attend that wedding with gladness, and I would drink champagne. I want the very best for my gay friends. I want love and happiness and faithfulness and commitment and community. Yes. That’s an easy answer.

And how would you respond if one of your children were gay?

I think we would parent that child exactly the same as the rest of them. Which is to say, we would always be on their side and in their corner and for them and with them. We want for all of our kids the same thing: faithful, committed marriage and a beautiful family that is committed to God and the church. I would have the same standard across the board, no matter what.

You mention faithfulness and God. Do you think an LGBT relationship can be holy?

I do. And my views here are tender. This is a very nuanced conversation, and it’s hard to nail down in one sitting. I’ve seen too much pain and rejection at the intersection of the gay community and the church. Every believer that witnesses that much overwhelming sorrow should be tender enough to do some hard work here.

What about that other hot-button issue? Where do you stand on abortion?

There’s something incredibly disingenuous about a Christian community that screams about abortion, but then refuses to support the very programs that are going to stabilize vulnerable, economically fragile families that decide to keep their kids. Some Christians want the baby born, but then don’t want to help the mama raise that baby. We don’t want to provide the scaffolding for them to thrive and be successful. That, to me, makes no sense at all. 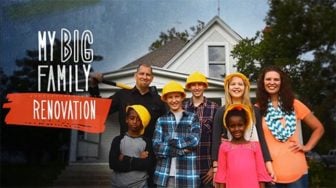 Jen and her family starred in “My Big Family Renovation” on HGTV.  Image courtesy of Jen Hatmaker

You’re a mother of a multiethnic family. What are your thoughts on Black Lives Matter?

I’m a supporter of Black Lives Matter, and I am deeply embedded in that conversation. I am learning so much from people of color right now, specifically my black mentors and leaders that I’ve sort of put myself under. This was not a topic I even considered 10 years ago.

But now I’ve read devastating books like “The New Jim Crow” by Michelle Alexander. It’s shattering, that piece of work. Brandon and I went down to Montgomery and sat for two days under the leadership of Bryan Stevenson, who wrote “Just Mercy,” and we learned so much from a legal standpoint. This conversation is wrought with tension. But I feel like this is a big part of my task and work, probably forever.

As a mother of children of color, do you fear for your children?

Yes. Both of my youngest two kids are Ethiopian. I can’t tell you how many nights I have stayed up worrying, because right now, my son Ben is 13. He’s adorable. Everybody loves him. He’s funny. He’s little, and he’s not threatening, but in four years he’s going to be 17. Right now, he is afforded covering by white parents. He borrows from our privilege because we are a package deal, but in a blink he’ll be walking around this world on his own.

My son is good to the core. When I think about him being viewed as criminal, dangerous, threatening, in any scenario — driving, walking, changing lanes, hanging around with his friends — I could just come unraveled. It terrifies me. I could cry my eyes out right now.

With great sorrow, we have sat down and had the talk with Ben that millions of black parents have had with their sons on how to walk and talk and respond to a police officer. Because all evidence and documented research tells me that he is far more at risk to be stopped, to be pulled over, to be frisked, to be searched, to be charged, to be manhandled, to be indicted, to be sentenced. It just terrifies me for my family and for all moms and all dads who are sending their black kids out into the world.