(The Conversation) — A civil rights group is suing Facebook and its top executives in federal court over the company’s failure to crack down on hate speech against Muslims.

Muslim Advocates, a Washington, D.C.-based organization focused on discrimination against American Muslims, alleges in the suit that Facebook has violated a series of local and federal consumer protection laws. The suit points out that the company itself, in a July 2020 internal audit, found that “Facebook has created an atmosphere where ‘Muslims feel under siege’” on the platform.

I am a scholar who tracks anti-Muslim activity such as violence, harassment, public speeches, property crimes and policies that target Muslims. This suit is right that many Muslims in the United States feel under siege – and have for quite some time.

But I am cautious about assigning too much blame to Facebook for the staggering magnitude and breadth of anti-Muslim activity in the U.S. As the author of “Fear in Our Hearts: What Islamophobia Tells Us about America,” I argue that this could be a convenient distraction – with limited overall effect – from the deeper histories and realities of white supremacy that require sustained attention.

The years 2015 to 2019 saw a spike in hateful incidents against Muslims, with the news media reporting more than a 1,000 cases over this period. The incidents ranged from everyday harassment and violence to federal policies targeting Muslim communities.

State-level anti-Shari’a legislation also escalated. The idea behind these bills was that Islamic law, which was often left ill-defined or undefined by lawmakers, posed a danger to the United States. Many legislators who introduced these bills acknowledged they were not spurred by any particular cases in which Islamic law undermined the work of courts in the United States. The point was to raise suspicion of Muslims and Islam.

Additionally, the real number of hateful incidents against Muslims is likely higher. The Bureau of Justice Statistics estimates that, in general, over 50% of hate crimes go unreported. Even when people do report them locally, there is no unified process for national tracking.

Some projects have started to document the extent and effects of these incidents. For example, I contribute to Mapping Islamophobia, a website tracking reports from reputable media outlets to capture trends over time, as well as individual stories behind them. From 2016 to 2019, ProPublica addressed the hate crime data problem with Documenting Hate, a multinewsroom and crowd-sourced collaboration to create a database of hate crimes.

Elon University computer scientist Megan Squire, whose work contributed to the new lawsuit against Facebook, has drawn on publicly available Facebook data to analyze the enormous volume of hateful content against Muslims circulating on the platform.

Importantly, Squire’s research also shows that anti-Muslim activity was deeply connected to fear and suspicion of nonwhite communities. Over the past hundred-plus years, nonwhite and immigrant communities have often been portrayed as being threats to white America.

For example, legislation in the late 19th and early 20th centuries excluded Asian immigrants. The post-Civil War era of Jim Crow segregation, and the internment of Japanese Americans during World War II, also reflected and contributed to this suspicion.

Not all Muslims in the U.S. identify as people of color. But the idea that Muslims constitute a “race” has become more common in recent years. Under the Trump administration, one way this played out was in the government’s ban on travel from some Muslim-majority countries.

But what these phenomena all have in common is that they are rooted in the history and contemporary reality of white supremacy.

This makes calling for Facebook to police anti-Muslim speech more complicated than it may seem at first glance. Facebook has on many occasions pledged to strengthen its efforts to root out hate speech on the platform, most recently in December of 2020. However, systemic racism often ends up inadvertently written into the complicated math formulas at the foundation of all internet search and content curation, including Facebook’s. This is called algorithm bias.

Given that billions of people use Facebook – and for many millions it’s the only way they access the internet – the connections between algorithms and racism on Facebook are especially significant.

Civil rights leaders have been pressuring Facebook for some time to address algorithms that are not up to the task of monitoring hate speech on the platform that targets people of color. The lawsuit filed by Muslim Advocates suggests that anti-Muslim speech remains rife despite Facebook’s effort to revise its algorithms.

The suit alleges that Facebook’s failure to more closely control hate speech on the platform results in the proliferation of anti-Muslim content for everyone to see, Muslim and non-Muslim alike. Muslim Advocates say this seeds and cultivates anti-Muslim bigotry and leaves Muslims feeling under siege.

Still, tweaked algorithms are likely not enough to solve a social problem with deep roots.

Sustained legal, political and cultural efforts are necessary to address more than acute symptoms of the deeper problem. Muslim Advocates’ lawsuit against Facebook is an example of using the legal system to address expressions of public hate against Muslims. The legal system does not guarantee redress, but it does offer an essential avenue for action.

Political steps could be taken as well. Congress could pass legislation creating a uniform national system for tracking hate crimes, including funding ramifications for nonparticipation. If it were implemented and maintained effectively, such a system could provide more clarity about the systemic nature of harassment, intimidation and violence against communities of color, including but not limited to Muslims.

The recently passed bill addressing anti-Asian violence, which President Biden signed into law, may be a step in the right direction. It creates stronger incentives for local and state law enforcement agencies to report data about hate crimes, even if stopping short of mandatory data reporting systems.

Critics, however, claim that the legislation will ultimately have limited effects because it does not address the underlying reasons that communities of color and other targeted groups experience public hate.

Muslims across the United States have long engaged in a concerted effort to humanize themselves to the broader American public. Many of these efforts, reflected in the rising number of Muslims running for political office at all levels of government, emphasize local connections and the shared values and interests that come with living together in a town, city or state. 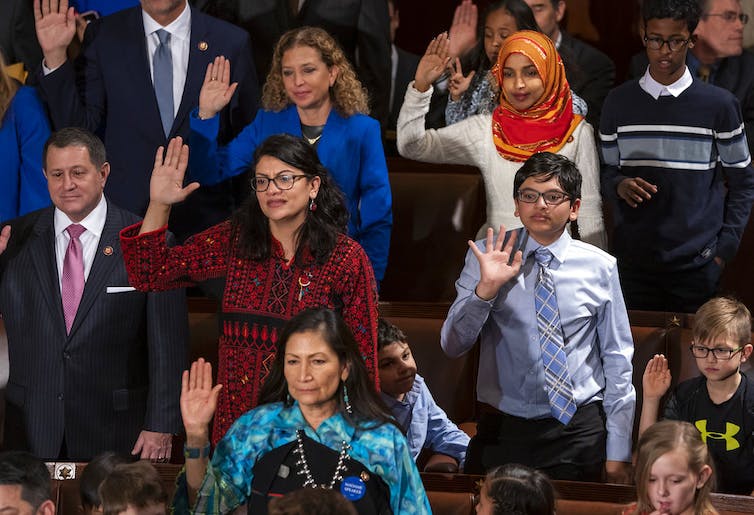 But it is a burden that Muslims cannot bear themselves. Anti-Muslim hostility – online and off – is one manifestation of the nation’s deep, everyday racial inequities, and failure to come to terms with histories and realities of white supremacy will not make its effects simply disappear. As the writer James Baldwin once said, “An invented past can never be used; it cracks and crumbles under the pressures of life like clay in a season of drought.”

(Caleb Elfenbein, Associate Professor, Departments of History and Religious Studies; Director, Center for the Humanities, Grinnell College. The views expressed in this commentary do not necessarily reflect those of Religion News Service.)